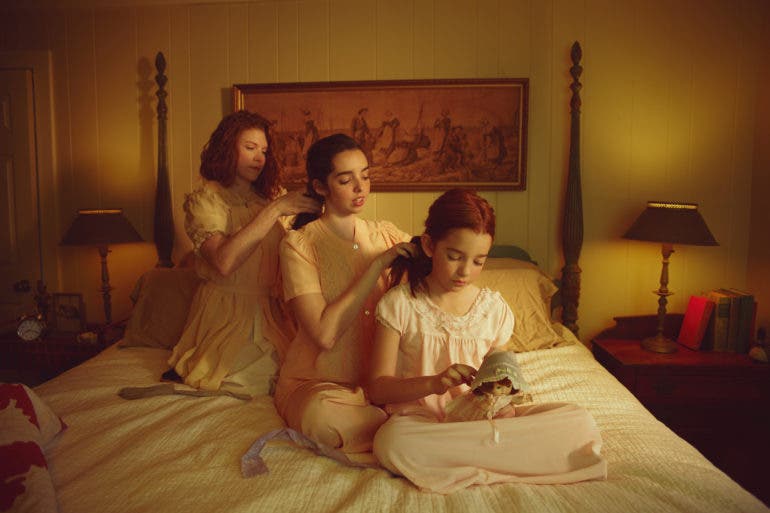 “Nostalgia has always been something that resonates with me,” says former engineer and storytelling photographer Kate Woodman, about something that often influences her images. Her series Sisters Americana looks at sibling and family relationships in the backdrop of a rural setting. She tells us about her family dynamics and how she enjoyed creating the backstories behind the characters in this series.

In my opinion, sibling and family relationships seem to be strained daily. This could be more the case when siblings aren’t physically located close to each other. I guess the same could be said of friendships when close or best friends who were once inseparable move to different countries. Where I’ve often reached out and tried to stay in touch, I’ve found the other person barely makes an effort to reciprocate. This hasn’t always been the case with everyone I know who moved far away, but it has been quite common. Ironically, when you consider that we can be instantly connected thanks to the internet, you wonder why people barely try.

Where once the adage absence makes the heart grow fonder stood firm, it seems to have been replaced with out of sight, out of mind over the last decade. Of course, this has just been my personal experience. It’s refreshing to see that Kate Woodman has a strong bond even today with her sister: a bond that contributed in many ways toward creating the various scenes she’s constructed in Sisters Americana.

Despite having a background in engineering, I’m not a particularly “techy” photographer, so for me it’s about whatever gets the job done. For my camera gear, I happened to start with Canon and so that’s the system I’ve been using for the last ten years.

The Phoblographer: Hi Kate. Please tell us about yourself and how you got into photography.

Kate Woodman: I got into photography accidentally actually, while I was working as a structural engineer in New Zealand. I had not really traveled much internationally and certainly not to a place with such epic landscapes, and I was fortunate enough to spend a lot of my free time there getting to see some beautiful locations. At first, photography was a way to just keep in touch with family back home and show them what I was up to. But quickly the process of photography—and particularly photo editing—became an obsession.

When I got back home to Philadelphia, where these kinds of epic landscapes didn’t exist, I decided to pivot into photographing people and got really into fashion and beauty. It wasn’t until I moved to Portland where it clicked to me that I could combine these two worlds of people and place, and from there on out, that symbiosis between a subject and their environment because the primary focus of my work.

The Phoblographer: What’s the backstory behind Sisters Americana? Is there a personal connection?

Kate Woodman: Sisters Americana is a series that was actually created as part of a tutorial on color theory, but really it’s sort of my love letter to both my relationship with my sister and mom, as well as to some of my favorite American artists, like Norman Rockwell, Edward Hopper, and Andrew Wyeth. I grew up in the northeastern US, where all of those artists were from, in a family where arts were strongly valued, so I feel like that aesthetic has kind of been ever present since my childhood.

A lot of my work focuses on relationships with other people, but often it’s done from a place of trying to empathize with experiences I haven’t had. This series was special in that it really does kind of reflect some of my own experiences with my family, and by framing it in this sort of nostalgic way, I think it reflects the experience of many other American families.

The Phoblographer: There’s a rural, somewhat retro feel to these images. Was the location an instant choice, or did you consider a few places before settling on this one?

Kate Woodman: I have a master’s degree in historic preservation, so historical architecture—particularly vernacular architecture—is something that I’m strongly drawn to. This series was partially inspired by the location itself—a rural farm in Missouri—which I came across during the process of designing this tutorial. We were extremely fortunate that the location is pretty much exactly how it’s seen in the images with minimal set dressing, and to me, it’s not uncommon to design a story around a specific location rather than trying to find a place to fit an existing narrative.

The Phoblographer: Were there some classic artists (maybe Normal Rockwell) that influenced the color palette and framing of these images? Were these artists influential from your childhood?

Kate Woodman: I have a vivid memory of a magnet on my grandparent’s fridge growing up, which was a picture of Norman Rockwell’s “Girl At the Mirror,” and I remember wanting to be that little girl so badly. I loved her hair and her dress and would try to recreate this vignette and even draw it out. I think Rockwell’s realism really inspired me as a kid, so much so that for a long time, I thought I would become a painter. When I was in grad school, I lived in West Chester county PA, which was the home of Andrew Wyeth, so I became enamored with his work at that point in my life and really admired his perspective on the mundane and the vernacular and finding beauty in the simple every day things.

Nostalgia has always been something that resonates with me, so there’s certainly a theme of that through a lot of my work. I think nostalgia is this strange collective non-experience that has the ability to inspire connection—few of us are able to remember the America expressed through these artists’ work, but we can all look at it and feel this pull to a time gone by.

The Phoblographer: Doesn’t the baby sister always get the most mollycoddling? If this describes your situation, tell us how it was for you when you grew up. If you were the elder/eldest, how did the disparity feel?

Kate Woodman: I wouldn’t necessarily say that my younger sister was mollycoddled—I actually think my parents did a good job of treating us fairly and equally and in the same way—but our personalities definitely manifested in very different ways regardless of our upbringing. The tactics that worked well for my sister didn’t necessarily work for me, and vice versa, which brings up some interesting questions regarding the whole nature vs. nurture debate. I think my sister was definitely the more rebellious of the two of us, while I really feared getting into trouble, so she would probably say I was the “favorite” child—but despite our differences, I think we had a lot of commonalities and were close enough in age to have a pretty good relationship that’s only gotten better as we’ve matured.

The Phoblographer: Was the choice to not have any parental figures in some of these images deliberate?

Kate Woodman: So the eldest woman in the series is actually meant to be the mother figure, which is why she’s not depicted in all of the frames in the series. My mom, sister, and I are all very close, so she’s an ever-present part of our dynamic, even if she isn’t always physically there.

I’ve also been known to shoot with more unconventional practical light sources like lightbulbs, flashlights, projectors, etc. since a lot of my work balances ambient lighting with strobe so I’m relying on some kind of environmental light source. I wouldn’t say I have a specific lighting style which helps me be a bit more flexible on the gear I use.

The Phoblographer: Take us through the production of some of your favorite photos from this please. What were the most interesting aspects of the shoot for you?

Kate Woodman: Because this was a narrative series, I had sort of created these personas that the talents were supposed to be. It was actually an extra special shoot because the two girls we had playing the sisters actually were sisters, so it brought a sense of authenticity to the shoot, and we were able to play off those dynamics to bring the images to life.

For this series, we sort of assigned the role of the more mature and even maternal sister to the older girl, while the younger one was meant to be more mischievous, which I think reflected my own family dynamic and created a more interesting storyline for the series. There’s a sense of playfulness and what-will-she-do-next element in the series that I think is more engaging to the audience.

I think my favorite scenes had to be the egg cracking on the head—which had the entire production crew in stitches as we were shooting—as well as the older sister looking under the bed for monsters. The two images together show this range between tension and bonding that’s common between many siblings.

The Phoblographer: Sibling relationships in today’s fast-paced world are getting harder to maintain. Do you agree?

Kate Woodman: I can see how the fast-paced nature of today’s world could preclude maintaining strong relationships, but honestly for myself, I think the connectivity of today’s world, combined with the bond that was established early on in our family, makes it easier to maintain a relationship. I talk to my sister several times a week, and the ease with which we can shoot a text or send a meme makes it so that we can share casually without the exhaustion of having to set time aside and catch up on weeks or months’ worth of activity. But I think I’ve actively made that connection a priority, which I think can be more difficult for some, especially if the bond wasn’t as strong, to begin with. Regardless, I’m glad that when I have an issue, or a problem, or even want to share something funny, I can communicate that virtually instantly—and for that, I’m very grateful.