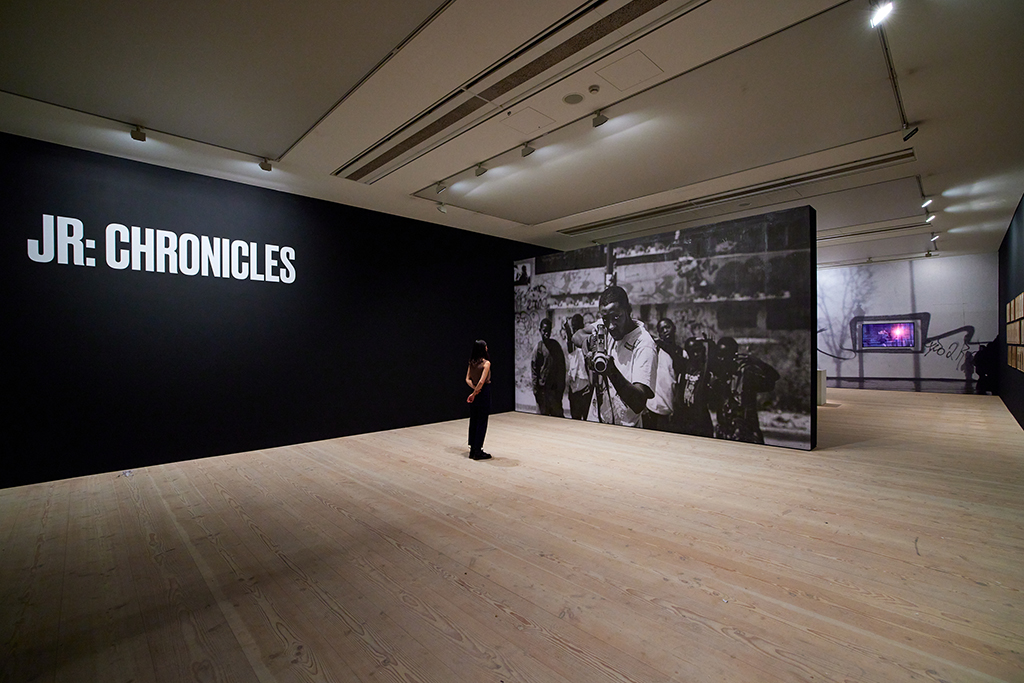 JR: Chronicles is the latest exhibition at the Saatchi Gallery, featuring the iconic work of JR. Exploring critical social issues through the confrontational intersection between photography, street art and social engagement. Jessica Miller takes a visit…

JR: Chronicles is the largest exhibition of work to date by acclaimed French artist JR, and following its success in New York, his first major exhibition in the UK. The exhibition presents a retrospective of the last 15 years, with his best-known work from all stages of his career so far.

The true identity of JR, pronounced shee-are, is publicly unknown; the artist is known only by his dark hat and glasses as disguise.

JR is a TED Prize winner (2011), 2018 Oscar nominated filmmaker for the documentary Faces Places, and one of Time’s 100 most influential people of 2018. He has received critical acclaim for his global projects that bring together diverse groups of participants and create dialogue around critical social issues, from women’s rights to immigration and gun control.

He was born in Paris in 1983 to Eastern European and Tunisian immigrant parents. JR began his career as a graffiti artist. After finding a Samsung camera (which is displayed in the exhibition) in the Paris Metro in 2001, he began documenting his friends in the act of graffitiing and soon started pasting photographs on buildings throughout urban centres.

Over the past two decades JR has emerged as one of the most powerful storytellers of diverse worlds and communities. Following in the footsteps of great documentary photographers such as Dorothea Lange and Gordon Parks, JR works at the intersections of photography, social engagement and street art.

Creating site-specific public interventions that aim to challenge our pre-conceived ideas and bring awareness to how individuals from ignored communities are misrepresented in the media. Whilst drawing attention to issues of inequality, poverty, injustice and the consequence of violence.

The exhibition is organised chronologically, starting with his early photographic projects including Portrait of a Generation (2004-6), JR’s first major public project, through to ongoing participatory projects and large scale photographic projects. Including The Secrets of the Great Pyramid (2019) a large-scale collaborative piece made for the 30th anniversary of the Louvre Pyramid, and Tehachapi (2019) which explores JR’s experiences with inmates from a Californian maximum-security prison.

Portrait of a Generation (2004-6) saw young inhabitants of the Montfermeil suburb in Paris photographed and enlarged images pasted to walls. This formed JR’s first exhibition on the walls of Les Bosquets, known as the ‘ghetto’ of Montfermeil.

In 2005, following riots in the same location as a result of social discontent triggered by the deaths of two teenagers hiding from police, JR returned and worked with more young people, to challenge the terms used to describe the rioters.

One of the early photographs from Portrait of a Generation, Hold Up (2004), leaves a big impression and resonates with some of today’s issues. It shows JR’s childhood friend and now Oscar-nominated filmmaker Ladj Ly, holding a camera like a machine gun.

Having grown up within underprivileged communities, JR’s work is now centered around challenging and changing the system these communities find themselves in. Stories of such communities are told through JR’s collaboration with their members.

From these early chronicles, a key process seen and used throughout JR’s later work is the photographs taken of individuals, then blown up and wheat pasted – sometimes illegally – on a monumental scale throughout urban cities around the world.

These installations are deliberately placed in public spaces near or within communities with whom JR has partnered, keeping the individuals portrayed at the centre of the discussions prompted by the artists work.

JR said in a recent Guardian interview: “I realised very early on that I was obsessed by the power of community… the process of making art together [in a big group] is actually far more interesting than the final piece. My main aim is to show the humanity in people.”

JR’s commitment to communities is echoed throughout the exhibition, not only in his work shown, but also interactive projects such as the digital interactive gallery for visitors made in collaboration with Art Explora, and Inside Out. The ongoing Inside Out project came as a result of JR winning the 2011 TED prize, enabling him to launch a participatory public project.

The project calls for others to submit their portraits to JR’s studio, which prints and sends back posters for the participant to paste; these are then documented and exhibited online.

More than 400,000 portraits have been pasted in 141 countries worldwide so far and highlight local and global issues such as the Black Lives Matter movement and the UN-related cholera outbreak in Haiti.

Alongside images of the work throughout the exhibition we are given insights into his process through contact sheets and plans for large installations as well as the impact time and weathering has on the paper.

Given that the pasted images will be washed away, walked on – or taken down in some cases – it has been important for JR to also document the voices of those photographed as a lasting memoir.

As such, throughout the exhibition video and audio recordings accompany the photographs as both documentation of process and evidence of collaborators.

JR x TIME. The Gun Chronicles: A Story of America

In 2018, TIME magazine and JR collaborated for a special issue (5th November 2018) surrounding the US gun debate. The project invited people to share their views and describe their experiences.

The magazine cover was created by combining the portraits of 245 contributors that gives a complex spectrum of views on the issue. The mural, displayed within Saatchi at extreme scale, was shot as a video, with everyone filmed one by one and then assembled.

In 2019, JR received permissions to work in a maximum-security prison in Tehachapi, California. The visit was to initially meet 28 prisoners and present a collaborative project. The majority of incarcerated people at Tehachapi had been imprisoned for a decade, with many sentenced to life.

One by one, each prisoner was photographed from above and given the chance to freely tell their story in front of the camera. Former prisoners and prison staff were also photographed; making a total of 48 portraits and stories.

Following the initial meet, JR returned to paste 388 strips of paper on the ground alongside a collaborative group of guards and prisoners to complete the prison pasting. Although the final image was indiscernible from the yard, from above we see the completed image of each person standing together. The installation naturally disappeared under the footsteps of the prison’s population.

The exhibition shows the documenting image taken from above and is accompanied by video that shows the prisoners speaking about their past and future.

Following news about the intent to construct a permanent wall between the United States and Mexico in 2017, JR created a huge installation supported by scaffolding at the border fence in the Tecate, Mexico. The installation shows Kikito, a young boy whose house in Tecate overlooks the border fence, peeking over the fence towards the US side.

Migrants, Mayra, Picnic Across the Border, 2017

At the US-Mexico border, on the last day of the Kikito installation, a picnic was organised. Guests included Kikito and his family plus hundreds of others from both countries. To drink and eat the same meal. JR’s iconic eyes of Mayra, one of the young undocumented immigrants registered under the Deferred Action for Childhood Arrivals program, was the centre of their meeting.

Commissioned by the Louvre in 2016, a photo-installation created by JR camouflaged the museum’s famous IM Pei–designed pyramid with a precise scan of the Pavillon Sully, which is located behind it. Inspired by the fact many visitors turn their backs on the monument to take selfies, the anamorphic techniques used makes the pyramid disappear.

In February 2019, JR was invited to return to the Louvre for another project, this time to “reveal” the pyramid through anamorphosis calculation on its 30th anniversary. To pull off the grand spectacle, 400 volunteers helped cut and paste 2000 strips of paper, making it the largest pasting ever by the artist.

Laura Uccello, Partnerships Director at Saatchi Gallery says “JR:Chronicles takes visitors on a global journey through the intimate storytelling of one of today’s most influential contemporary artists. The exhibition opens in London during a key moment in time in which social engagement and the power of communities have taken centre-stage in London and around the world.”

The exhibition is slick, engaging and powerful in displaying and emphasising the ideas concerned within JR’s work, with a nice touch of interactivity and collaboration with visitors. It certainly makes me want to explore the world to fully appreciate these huge pieces in-situ.

You can still see JR: Chronicles at the Saatchi Gallery, London until 3 October 2021. Tickets on sale at www.saatchigallery.com/jrtickets .

JR received his first solo museum exhibitions in 2013 at the Watari Museum of Contemporary Art Tokyo, and the Contemporary Arts Center, Cincinnati, followed by presentations at Museum Frieder Burda in Baden-Baden, in 2014 and the Hong Kong Contemporary Art Foundation, in 2015.

In 2016, the artist worked with the Rio de Janeiro Olympics to cover the streets with large-scale photo- installations of athletes in motion; the Centre Pompidou, Paris, to create an exhibition and workshop to help children discover photography; and the Palais de Tokyo, Paris, where he collaborated with the Brazilian artist duo OSGEMEOS on the Lasco Project, a permanent installation on display in the underground chambers of the museum.