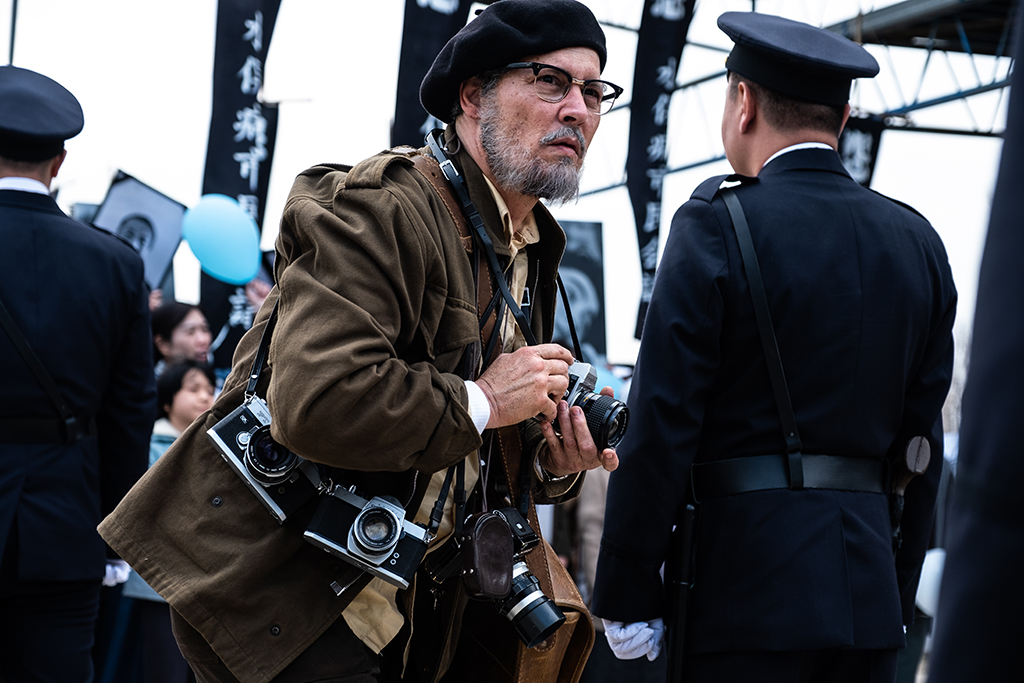 Minamata, an interesting new movie about famous US photographer W. Eugene Smith, goes on UK release today, starring Johnny Depp. There has been controversy around his involvement, however, with the director accusing MGM of burying the movie because of the damaging publicity surrounding Depp’s libel case against The Sun

Minamata, a long-anticipated biographical drama starring Johnny Depp as war and documentary photographer W. Eugene Smith, is released across the UK and Ireland today. It tells the story of how Smith, a celebrated but reclusive photographer, was commissioned by Life magazine to cover the Minamata disaster in Japan from 1971-4.

The residents of Minamata, a coastal city in southern Japan, had long been suffering major health problems caused by dumping of toxic chemical waste, including mercury, into the local fishing waters by a major chemical company called Chisso Corporation.

Smith embeds himself into the local community, recording its efforts to deal with the so-called Minamata disease – a devastating neurological illness directly caused by mercury poisoning – and receive recognition and compensation from the Japanese government. Chisso had been dumping poisonous waste, including mercury, from 1932 to 1968.

The movie recounts how Smith used his camera to record the unfolding human tragedy and how he pays a high personal price for his involvement in the campaign – we won’t give the ending away just yet. Smith and his wife, Aileen Mioko Smith, took hundreds of photos of the people of Minamata, who were struggling with their illness and campaigning for compensation.

One of Smith’s images had a particularly strong impact. Taken in December 1971, Tomoko in Her Bath (above) showed a parent tenderly bathing her Minamata Disease-stricken daughter. This black-and-white image is not only considered Smith’s greatest photo, but its stark revelation of the physical impact the illness had on people also drew international attention to the ‘Minamata Movement’ campaign.

The movie is based on the book of the same name by Smith and Aileen Mioko Smith and is directed by Andrew Levitas. As mentioned, the biggest name in the movie is Johnny Depp (below).

“For many years I’d had a bit of a fascination with (Smith),” says the actor. “I knew Mary Ellen Mark very well. She was a photographer at Magnum for a while and had known W. Eugene Smith, so I asked her about him because I admire his photos. She told me how he was this curmudgeonly but ultra-sensitive sort of Bohemian, a hardened war photo-journalist who had seen it all. Then she told me this great story about him. His sense of humour was such that, when he was asked, ‘What does the W stand for?’ he would say, ‘Wonderful.’”

Depp continues. “I hope it’s as accurate a portrayal of ‘Gene’ as I was able to glean from all the information that I’ve read, and from talking to all the people who knew him — certainly Aileen. He was complex, you know? Kind of a madman, kind of a genius; a total, lawless, bohemian coming into a

culture that is so calm, serene and peaceful. He is a ticking time bomb. He did not want to feel. He had such pain inside that he would do everything he could to escape the feeling. But I think Minamata opened him up again.”

With Minamata itself having drastically changed since the ’70s — it is now a very modern-looking eco-city – the production could only shoot a small portion of the film on location in the actual place. The balance of production was based on warehouse stages in the port of Belgrade, Serbia, and on location in the coastal town of Tivat in Montenegro, which proved a remarkable match for Minamata Bay. “It took a little bit of finding, but we got very lucky, I think, in finding something very similar,” says production designer Tom Foden.

“I built the movie to all be from Gene’s point of view,” adds direct Andrew Levitas. “We’re inside his mind and we are seeing these unfolding events through his lens. This is one of the greatest photographers of all time, a guy who could see the world through any lens of his. He could shoot a photo in his mind without the camera. He had incredible skills, and it’s also an incredible blessing for a movie, because it can make it visually refreshing and different and interesting.

This movie should feel visually like something you haven’t seen before, because we’re taking all this stuff on board. My camera is Gene… Johnny and I spent countless hours talking about where Gene’s mind would be in any moment: what was happening, what was going on, and building all that back story, so I could put him in a room and roll the camera for 30 minutes and let him do his thing.”

On the Japanese side, there are also some familiar faces, notably Hiroyuki Sanada (The Last Samurai, Westworld) as Mitsuo Yamazaki, a leader of the activists, who helps the families and patients, and tries to fight against the company and the wider government. Meanwhile, celebrated musician Ryuichi Sakamato composed the haunting score.

Despite the movie’s UK release today, director Andrew Levitas has been unhappy about the way US studio MGM has handled Minamata, accusing it of “burying” the movie owing to the recent controversy surrounding Johnny Depp and his loss of a libel action against the Sun newspaper.

Who was W. Eugene Smith?

* William Eugene Smith was born in Kansas in 1918 and became interested in photography as a teenager.

* He started working for Newsweek magazine in 1938, and covered the Pacific war from 1943. He was seriously injured by mortar fire during the Battle of Okinawa

* Following the war Smith continued working as a photojournalist, with notable subjects including country doctor Ernest Ceriani and Albert Schweizer. He joined Magnum Photos in 1955

* Together with his Japanese-American wife, Aileen Mioko Smith, he moved to Minamata in 1971 to cover the unfolding mercury-poisoning scandal

* Smith returned to the US in 1974 and continued to work and teach until his death in 1978 from a massive stroke.

According to the International Center for Photography, “Smith is credited with the developing the photo essay to its ultimate form. He was an exacting printer, and the combination of innovation, integrity, and technical mastery in his photography made his work the standard by which photojournalism was measured for many years.”