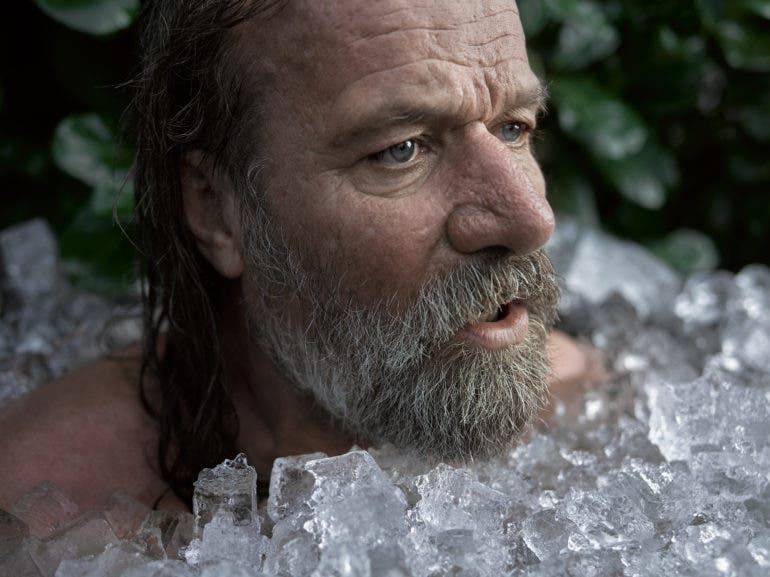 “I found myself honored to spend a day learning and absorbing the knowledge Wim gratefully shared with us,” says Dutch photographer Jeroen Nieuwhuis about his experiences with the Ice Man, Wim Hof. A multiple Guinness world record holder for his endurance feats, Wim’s long years of training have given him the ability to control his heart rate and blood circulation to withstand extreme temperatures. Jeroen and his team spent a day capturing Wim’s daily routine to showcase his endurance skills on camera.

Jeroen’s work takes him all around the world, photographing commercial clients and personal projects in varying conditions. However, when Covid-19 regulations prevented him from traveling abroad, he decided to take a road trip with his team to photograph Wim Hof doing one of his endurance routines. Proper preparation and one-to-one discussions with Wim ensured that Jeroen captured the real essence of the endurance of the Ice Man and his superhuman abilities.

Despite shooting professionally for over 10 years, I still find myself getting nervous at times when I arrive at a site. There’s always the fear at the back of my head that something could go wrong, and in many cases it does. Preparation is key to any photoshoot. This doesn’t just involve prepping gear and sketching out a storyboard. A lot of times you also need to prepare your mindset to seamlessly execute a shoot on location. Sometimes you need to instantly come up with a plan B when plan A doesn’t work out. I can’t remember who it was, but a legendary photographer once said that even the most experienced photographers run into unexpected hurdles when they’re on shoots; the best among them know how to adapt and move on with the shoot as if nothing happened.

The main reason I use this camera, for almost all my shoots, is because of the larger sensor. Because it’s almost four times the size of a full-frame DSLR camera it creates a much smoother transition from sharp to unsharp resulting in a more creamy almost painterly look.

The Phoblographer: Hi Jeroen. Tell us about yourself and how you got into photography.

Jeroen Nieuwhuis: I’m a photographer from the Netherlands. Working professionally from the age of 17 (now 29), my interest in photography started at the age of 11 through skateboarding.

Besides my commercial assignments, I also work on numerous personal projects all over the globe. My most recent project, about the life of The Mountain Men, is a photography documentation shot over a three-year period that showcases some of the most beautiful but also extreme conditions these men are putting themselves in every day. The outcome will be a high-quality art book with over 150+ images, stories, and documents taking the reader on a historical journey.

The Phoblographer: What camera gear did you use for the Ice Man project? Please explain how this helped to achieve your creative vision.

Jeroen Nieuwhuis: For the project with Wim Hof, I used my Phase One XF medium format camera system and Broncolor flash equipment, which was the Siros 800L battery-powered flash. The main reason I use this camera for almost all my shoots is because of the larger sensor. Because it’s almost four times the size of a full-frame DSLR camera, it creates a much smoother transition from sharp to unsharp resulting in a more creamy almost painterly look.

We shot this on an overcast day in January making the ambient light looking really flat. For my style of photography, I prefer the light to some more direction. So to create this look I used my Broncolor Siros 800L with a 150cm octabox. By placing it opposite of Wim’s face I managed to create some soft and natural-looking light that wasn’t completely flat.

The Phoblographer: There’s probably only a handful of men on the planet who can achieve the feats Wim Hof can. How did the idea for this project come about to you?

Jeroen Nieuwhuis: Of course, Wim is a one of a kind man famous for breaking a number of records related to cold exposure, including climbing Mount Kilimanjaro in shorts, running a half marathon above the Arctic Circle barefoot, and standing in a container while covered with ice cubes for more than 112 minutes. This, and the fact that he is also from the Netherlands and I couldn’t travel abroad for projects, made me want to do a documentation about his everyday life. So me, my fellow director Jacob Ossef and my assistant drove little over an hour to his place and spent the day following and capturing his daily routine. And of course, we also had to take a dip in an ice bath with him haha.

The Phoblographer: What does the drum and the barbell signify in these images. Tell us about the story behind these images.

Jeroen Nieuwhuis: Wim starts his training by rotating a 20kg bar approximately 200 times to warm up his body. After that, he plays the drums and deeply inhales and exhales all the oxygen from his body and prepares his mind for a state of focus.

The Phoblographer: You were photographing Wim moving from really cold to really warm locations. How did you keep your gear in optimal working condition during these sudden temperature changes? Were there any unfortunate gear malfunctions during this project?

Jeroen Nieuwhuis: Although Wim was indeed moving from cold (ice baths and a freezer room) to warm (sauna and a fire inside a tipi), I didn’t have to put my camera in these conditions because I managed to shoot it from the outside looking into for example the freezer room. But I still needed my Broncolor flash to be inside the freezer room and the sauna for the look and the direction of light I wanted.

Luckily the build quality of my Broncolor equipment is superb, but still, we shot this as quickly as possible to not overly expose the flash to these extreme conditions.

The Phoblographer: Since some of your work is in harsh conditions and climates around the world, please give our readers some tips on how to prepare for such conditions. How can they better plan for such shoots and what sort of backup measures must they take?

Jeroen Nieuwhuis: My book project about the Mountain Men had to handle some harsh conditions in terms of weather. From the cold in the North of America (-25 degrees Celsius) to +40 in the middle of America, you need to rely on good equipment (and backup equipment). My Broncolor flash equipment luckily is capable of taking a hit, which it did a few times breaking off the handle and damaging the housing but still remained fully workable.

Besides your camera gear, it’s essential to also wear the right clothing. Having gloves to protect you from the cold and breathable fabric clothing to prevent you from overheating is key when you’re working in these harsh conditions. And always bring some extra batteries and empty memory cards because you never know when they die out on you.

The Phoblographer: What was the most inspiring part of this project? What was your biggest takeaway from being a participant of sorts while Wim was performing these feats?

Jeroen Nieuwhuis: This man did things no one thought would be possible, so I found myself honored to spend a day learning and absorbing the knowledge Wim gratefully shared with us. It was also my first time in an ice bath for me which was something I probably wouldn’t do if it wasn’t for Wim standing next to me and guiding me through the process.

The Phoblographer: Wim has become a well-known figure, a celebrity of sorts. How does shooting someone of great interest differ from photographing a regular person? How do you handle that?

Jeroen Nieuwhuis: To be honest, I don’t really make a difference when I’m shooting a celebrity or just a regular person. It’s all about explaining your vision to the person you are photographing in order to create the image you have envisioned. Before I start taking photographs, I always first sit down with that person, explaining what I’m trying to create, so we are both on the same level.

The Phoblographer: What does the word endurance mean to you personally?

Jeroen Nieuwhuis: Wim is the definition of endurance. Besides all the records he broke and the scientific researches explaining the benefits of exposing the body to cold exposure, he still works hard to get his message out there for the benefit of human beings. This level of dedication is something I really look up to.

All images by Jeroen Nieuwhuis. Used with permission. Visit his website, Instagram, Behance, and Vimeo pages to see more of his work