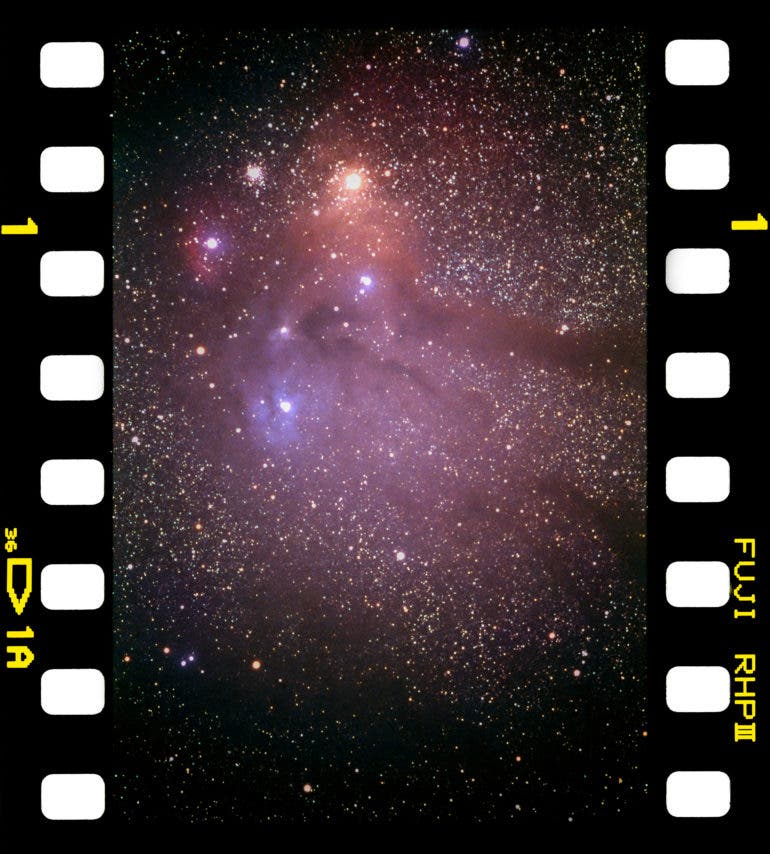 All images by Jason De Freitas. Used with permission.

“I’m so starved for light that I’m usually exposing for as long as I have time for or my tracking accuracy can achieve,” says Jason De Freitas. Jason is based on the South Coast of New South Wales and is one of the world’s few long-exposure film astrophotographers. He’s a fine art photographer who makes the most of Australia’s varied landscape and dark night skies. That’s a critical part of how he makes his unique astrophotography on film.

Slide film photography is something fairly close to my heart. As a toddler, my grandfather and I would hold up countless slide transparencies to the tube light illuminating our home in Dubai. He would tell me stories of how he captured those images. Not once in all the years since then did I imagine I would see a photographer capture the Milky Way on one such slide.

The Phoblographer: What sparked the (expensive) idea that film could be used as a medium for astrophotography?

Jason De Freitas: In my more general photography, I had fallen in love with film as a medium because I found it very enjoyable to use, and it changed my approach to photography. Astrophotography remained one of the few subjects that I would still have to use my digital camera for, but the question about whether I could get some basic astro shots with film was always in the back of my mind. To me, it was about the challenge of taking a Milky Way photo on film, and the satisfaction of pulling it off has been a driving force behind taking it further and further one step at a time.

The Phoblographer: I assume you’ve tried and tested a fairly large variety of film stock to choose some that provide the best results. How long did this take you (and did it come at a considerable cost)?

Jason De Freitas: Quite the opposite actually. Finding information about analog astrophotography is tough because it’s all hidden under enormous amounts of digital astrophotography knowledge, but I did find out what film stocks are better to use. The unfortunate thing is that very few of those stocks are still made, so my choices are very limited – I also look for certain expired film stocks that have been stored frozen on eBay that have great characteristics for astro. Good clear nights with perfect conditions are very limited, so testing is very expensive in terms of imaging time – putting in the research before and making calculated estimates has really proven to be the best way forward for me.

The Phoblographer: Typically, how does the calculative process work (to arrive at the desired exposure values)? Is there a tried and tested formula that you’ve developed, or do you find yourself getting varied results each time?

Jason De Freitas: This is a question that I get asked a lot, but it isn’t actually something I calculate at all. I’m so starved for light that I’m usually exposing for as long as I have time for or my tracking accuracy can achieve. Part of the research I mentioned earlier involves trying to find astro shots that have been taken on the same stock or similar stocks and using those settings as reference. I can use that information to estimate exposure durations for the equipment I’m using.

The Phoblographer: How different is the technical process when compared to shooting astro photos on digital cameras (full frame or medium format)?

Jason De Freitas: The biggest difference that affects the technical process is reciprocity failure. This basically means that for low exposure values, film needs an extra amount of exposure time compared to a digital exposure. The end result of this is that film needs an order of magnitude longer exposure than digital. For the most basic Milky Way shot that you can shoot with a tripod and a digital camera, you would need to use a star tracker to achieve it on film since the exposure is much longer. These exposure times get even longer when you move from full-frame to large formats because the lenses are slower. For a medium format Milky Way shot, my exposures can be over an hour – this requires a well-aligned star tracker with auto guiding to achieve sharp results.

The Phoblographer: Do you have any preferred spots in Australia that you head back to often?

Jason De Freitas: Fortunately I live in a smaller town with low light pollution on the south coast of NSW, Australia – this is what has encouraged me to shoot a lot of astrophotography. I have a go-to spot about 30 minutes drive from me that has clear views east and south. I also have a small list of lookouts around me if I need views of the horizon in other directions.

The Phoblographer: Are there any locations around the world that you’d like to head to some day for this?

Jason De Freitas: I’ve always wanted to see and photograph the northern or southern lights, and I think I would most like to see that in Norway. In terms of shooting astro, I’m not particularly drawn to any location besides some truly dark sky areas, but I would love to view the sky in the northern hemisphere and see some targets that I can’t see from home. I still have plenty of celestial bodies in the southern sky to keep me busy for a long time though.

The Phoblographer: Have there been/are there any photographers who have influenced your work?

Jason De Freitas: One photographer’s work that I am constantly drawn to is Brian Kosoff. He shoots some star trail landscapes on film that I am yet to see anything else that compares; they feel straight out of a painting. The level of mastery his landscapes display is very inspiring to me.

The Phoblographer: What are the main challenges you face when photography the night sky on film? Does the unpredictability of the results make it more interesting when you develop?

Jason De Freitas: The extremely long exposures mean I only get the opportunity to take a handful of frames in a month. This makes the process of getting feedback from my shots extremely slow, and I never really know if my equipment was working correctly after hours of work. If my results aren’t as planned, I have to wait another month usually and hope for good weather before I can try again. This all just makes it so satisfying when it does work out better than expected – nothing beats that feeling.

The Phoblographer: Could we learn a bit about the photographic setup you use? Are there DIY components to it as well?

Jason De Freitas: A lot of my images have been taken using a star adventurer pro and my guiding setup is a ZWO 30mm f4 guide scope with an ASI120MC-s camera. Mid last year, I upgraded to using an NEQ6 equatorial mount with the same guiding setup. I use quite a few different cameras depending on the format of film I’m shooting. For 35mm, 6×6, and 6×7 I use a Nikon FM2, Bronica SQ-A, and a Pentax 67 respectively. The DIY component of my setup mainly comes in for large format 4×5 photos. I’ve been using a 3D printed camera with a Nikkor 90mm f/4.5 large format lens as well as some adapters to use projector lenses.

The Phoblographer: Tell us a bit about your retro 3D printing store. What gave you the idea for that?

Jason De Freitas: Almost all of the 3D printed items I make and sell have started out as jokes and/or gift ideas. I’m just a film photography enthusiast and try not to take myself too seriously, so I enjoy making fun and unique prints related to photography. I never planned on selling them, but I had a lot of people asking me for them. These days I’ve slowed down on selling them as I’d rather focus my time on taking more photographs and making prints, but I still enjoy designing new film-related pieces.

The Phoblographer: What tips would you have for any photographers who want to try this method for themselves?

Jason De Freitas: I always suggest starting with digital if you have never done any type of astrophotography before so you can understand the basics. However, the perfect starting place for film is star trails. You can use most film stocks, and getting the exposure right is less critical. Try to travel to some dark skies and expose the camera at about f8 for as long as you’re willing to wait! Make sure you know where infinity focus is on your lens, as it’s not always at the hard stop. When it comes to tracked astrophotography, my biggest tip is to shoot on Provia, Ektar, or Acros.

All images by Jason De Freitas. Used with permission. Visit his website for more!