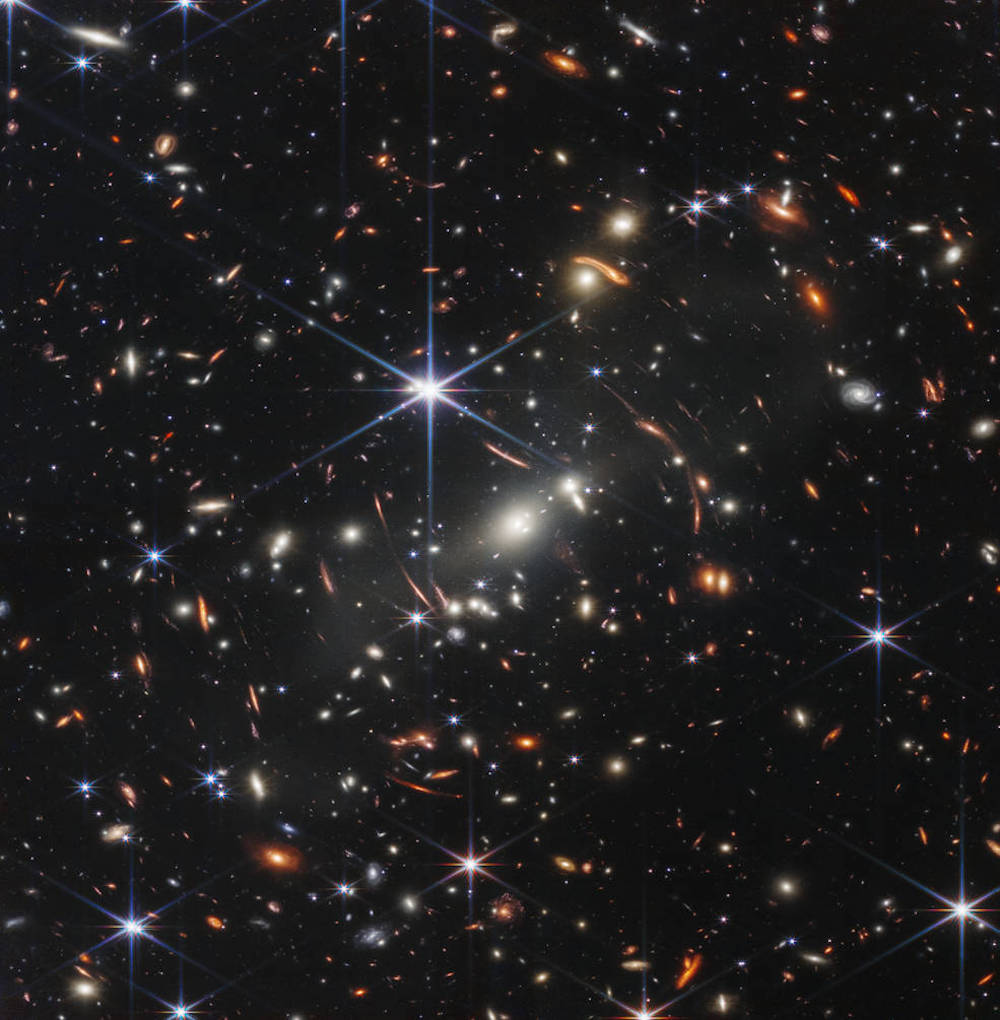 NASA has unveiled the first batch of images shot by the James Webb Space Telescope (JWST), which includes a picture that shows the deepest and sharpest ever infrared view of the universe shot to date.

The $10billion JWST launched on 25 December 2021 on an Ariane 5 rocket from Europe’s Spaceport in French Guiana, South America.

It has been billed as the successor to the famous Hubble Space Telescope.

The JWST has two key goals – firstly, to take pictures of the very first stars to shine in the Universe more than 13.5 billion years ago.

Secondly, to probe far-off planets to see if they might be habitable.

The ‘deep field’ image of SMACS 0723 shows a cluster of galaxies and is the deepest and sharpest ever infrared view of the universe. Photo: courtesy NASA

The image of what’s known as SMACS 0723 is said to be the deepest, most detailed infrared view of the universe to date, containing the light from galaxies that has taken many billions of years to reach us.

What you see is a cluster of galaxies in the Southern Hemisphere constellation of Volans, aka SMACS 0723.

The cluster isn’t that far away, ‘only’ being about 4.6 billion light-years in the distance.

But the great mass of this cluster has bent and magnified the light of objects that are much, much further away.

It’s a gravitational effect; the astronomical equivalent of a zoom lens for a telescope.

The Hubble Space Telescope used to stare at the sky for weeks on end to produce this kind of result.

The JWST identified its super-deep objects after only 12.5 hours of observations.

Known as ‘Webb’s First Deep Field’, this image of galaxy cluster SMACS 0723 is overflowing with detail.

Thousands of galaxies – including the faintest objects ever observed in the infrared – have appeared in the JWST’s view for the first time.

This slice of the vast universe covers a patch of sky approximately the size of a grain of sand held at arm’s length by someone on the ground.

The JWST managed to detect in this picture the distorted shape (the red arcs) of galaxies that existed a mere 600 million years after the ‘Big Bang’ (the universe is 13.8 billion years old).

Scientists can tell from the quality of the data produced by the JWST that the telescope is sensing space way beyond the most far-flung object in this image.

As a consequence, it’s possible this is even the deepest cosmic viewing field ever obtained.

The full set of the telescope’s first full-colour images and spectroscopic data, which uncover a collection of cosmic features elusive until now, were selected by an international committee of representatives from NASA, ESA, CSA, and the Space Telescope Science Institute.

These listed targets below represent the first wave of full-colour scientific images and spectra the observatory has gathered, and the official beginning of Webb’s general science operations.

The images show the following:

The JWST’s look at the ‘Cosmic Cliffs’ in the Carina Nebula unveils the earliest, rapid phases of star formation that were previously hidden.

Looking at this star-forming region in the southern constellation Carina, as well as others like it, it’s clear the JWST can see newly forming stars and study the gas and dust that made them.

This landscape of ‘mountains’ and ‘valleys’ speckled with glittering stars is actually the edge of a nearby, young, star-forming region called NGC 3324 in the Carina Nebula.

This picture shows the edge of the giant, gaseous cavity within NGC 3324, and the tallest ‘peaks’ in this image are about seven light-years high.

The cavernous area has been carved from the nebula by the intense ultraviolet radiation and stellar winds from extremely massive, hot, young stars located in the centre of the bubble, above the area shown in this image.

This planetary nebula, an expanding cloud of gas that surrounds a dying star, is approximately 2,000 light years away.

From birth to death as a planetary nebula, JWST can explore the expelling shells of dust and gas of ageing stars that may one day become a new star or planet.

The dimmer star at the centre of this scene has been sending out rings of gas and dust for thousands of years in all directions, and the JWST has revealed for the first time that this star is cloaked in dust.

Two cameras aboard Webb captured the latest image of this planetary nebula, catalogued as NGC 3132, and known informally as the Southern Ring Nebula. It is approximately 2,500 light-years away.

JWST will allow astronomers to dig into many more specifics about planetary nebulae like this one – clouds of gas and dust expelled by dying stars.

Understanding which molecules are present, and where they lie throughout the shells of gas and dust, will help researchers refine their knowledge of these objects.

The JWST’s view of this compact group of galaxies, located in the constellation Pegasus, pierced through the shroud of dust surrounding the centre of one galaxy, to reveal the velocity and composition of the gas near its supermassive black hole.

Stephan’s Quintet, a visual grouping of five galaxies, is best known for being prominently featured in the classic film It’s a Wonderful Life.

This enormous mosaic is the JWST’s largest image to date, covering about one-fifth of the Moon’s diameter.

It contains over 150million pixels and is constructed from almost 1,000 separate image files.

Sweeping tails of gas, dust and stars are being pulled from several of the galaxies due to gravitational interactions.

Most dramatically, the JWST has captured huge shock waves as one of the galaxies, NGC 7318B, smashes through the cluster.

The JWST’s detailed observation of this hot, puffy planet outside our solar system reveals the clear signature of water, along with evidence of haze and clouds, in the atmosphere that previous studies of this planet did not detect.

With JWST’s first detection of water in the atmosphere of an exoplanet, it will now set out to study hundreds of other systems to understand what other planetary atmospheres are made of.

The observation, which reveals the presence of specific gas molecules based on tiny decreases in the brightness of precise colours of light, is the most detailed of its kind to date, demonstrating JWST’s unprecedented ability to analyse atmospheres hundreds of light-years away.

The Hubble Space Telescope captured the first clear detection of water in 2013, but the JWST’s immediate and more detailed observation marks a giant leap forward in the quest to characterise potentially habitable planets beyond Earth.

How does the James Webb Space Telescope work?

The James Webb Space Telescope has an 18-segment mirror that’s designed to capture infrared light from the first galaxies that formed in the early universe. Photo: courtesy NASA

After completing a complex deployment sequence in space, it underwent months of commissioning where its mirrors were aligned, and its instruments were calibrated to its space environment and prepared for science.

The JWST has four different science instruments to gaze deeply into the near-infrared and mid-infrared to capture images and spectra of astronomical objects.

Its primary imager is the Near Infrared Camera (NIRcam), which senses in the 0.6-50 micron range to detect infrared light from the earliest stars and galaxies being born.

The Near Infrared Spectrograph (NIRSpec) operates in the same wavelength as NIRcam. It analyses the physical characteristics of objects such as stars by splitting their light into a spectrum. The spectrograph has 62,000 individual shutters, which can all open or close to block out the light of brighter stars.

The Mid-Infrared Instrument (MIRI) is both a camera and a spectrograph, which covers the widest wavelength range (5-28 microns). Its wide-field broadband camera takes more of the kinds of images that made the Hubble Telescope well known.

To find out more go to Webb Space Telescope GSFC/NASA.

Apollo 11 anniversary special: the first camera on the moon