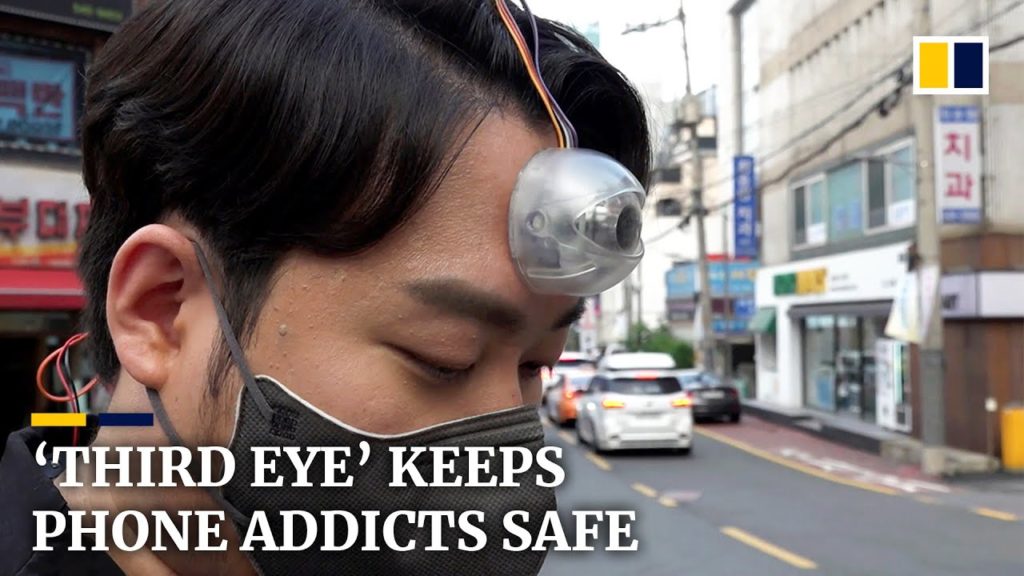 South Korean designer Paeng Minwook has invented a forehead-mounted camera that is meant to criticize the modern-day smartphone user who spends an inordinate amount of time looking down at their phones and not at possible obstacles in their path.

Minwook calls such people “Phono Sapiens” and refers to them as a new human species born from smartphones.

“Smartphones have deeply permeated into modern people’s lives, which made it difficult for us to live without them,” he writes in an Instagram post describing his invention. “This is perceived negatively, but the evolution to Phono Sapiens of mankind is undeniably a reality. So I accepted the fact that the human body is controlled by smartphones as a positive change. This gives us a broad perspective on the unfinished Phono sapiens. It also allows us to predict and propose fully evolved generation of Phono Sapiens.”

He refers to his invention as the “first evolution” towards melding with smartphones.

“We can’t take our eyes off of our smartphones while walking. That’s why we evolved to have a third eye. This eye moves separately from the rest of the eyes and it opens when our previous eyes are looking at smartphone,” Minwook continues.

The Third Eye is clearly satire, and Minwook’s main goal is to call attention to a behavior that he finds unsettling.

“This project is not just a common product design, but more of an ironic or critical design. Through ‘The Third Eye,’ I hope people can criticize our behaviors and rethink about ourselves evolving to Phono Sapiens than resolve the problems we encounter in the present.”

Minwook was particularly dedicated to the Third Eye as a functional device despite the intent for it to be a critique of society more than a real product — so much so he spent about six weeks working on the protype seen in the video above and on his Instagram.

It is equipped with a sensor that measures the angle of the device and it is attached to the back of the head. That sensor can detect when the wearer’s head is tilted down and will open the Third Eye’s eyelid and allow the ultrasonic sensor in the “eye” to detect obstacles in front of the user and will inform the wearer with a buzzer.

Clever satire can help elicit positive change in society, but it remains to be seen if that will end up being the case here — smartphones really do pull people’s attention in a way that’s hard to break away from. You can see more of Minwook’s work on his Instagram.