Instagram Tests ‘Suggested Posts’ That Can Appear Ahead of Friends 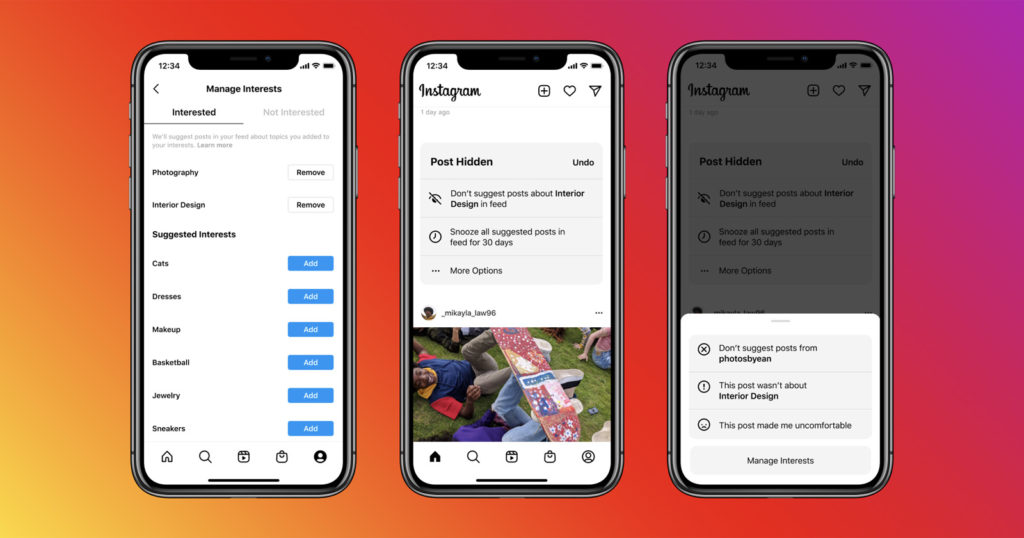 Instagram is reportedly testing a feature with a “small number” of users where its “suggested posts” feature will expand beyond just when you’ve reached the end of your feed and will be mixed throughout a browsing experience, possibly coming ahead of posts from those users follow.

In a confirmation to The Verge, Instagram says that reception to the “suggested posts” feature was so positive that the company decided to try and mix those suggestions in with the average viewing experience, sometimes ahead of photos and videos from people a user explicitly follows.

Additionally, Instagram is testing new controls that will allow users to add a specific topic of interest for suggested posts as well as the ability to “snooze” the recommendations for 30 days or hide them from a feed entirely. “Suggested posts” is a feature that Instagram added last year, but prior to this small test was only ever seen after a user saw everything from all people they followed that was shared.

This shift would make Instagram theoretically function similarly to how YouTube manages its “home” page, which highlights content that is a mix of videos made by those a user is subscribed to as well as videos that YouTube’s algorithm thinks are of interest. YouTube leans so heavily on this analytics-forward approach that subscriptions have fallen in importance over the years.

If Instagram were to adopt placing suggested posts for all users, it may have a dramatic impact on how the social network functions. Instagram has a vested interest in keeping users on the platform for as long as possible, and keep them coming back. As such, the social network should not necessarily need to put as much value on showing a user content from people they follow as opposed to delivering photos and videos that keep them engaged. As YouTube has shown, just because a person subscribes to a Channel doesn’t mean that the user necessarily wants to see all content that Channel produces.

That’s the theory, anyway, and it might have ramifications in the long term for content creators who rely on Instagram to reach an audience, especially if suggested posts become more popular and show higher engagement than that of specifically followed accounts.

Algorithm-focused approaches have generally superseded ones that focus on giving users complete control over what they see. Facebook and Instagram both ditched a timeline-based approach years ago, and Twitter defaults users to the “Home” view instead of “Latest Tweets” which uses an algorithm to determine the most interesting content. At least in Twitter’s case, switching back to Latest Tweets is an option.

Instagram did not specify how many people its “suggested posts” test would affect nor how long it intended to test the feature.