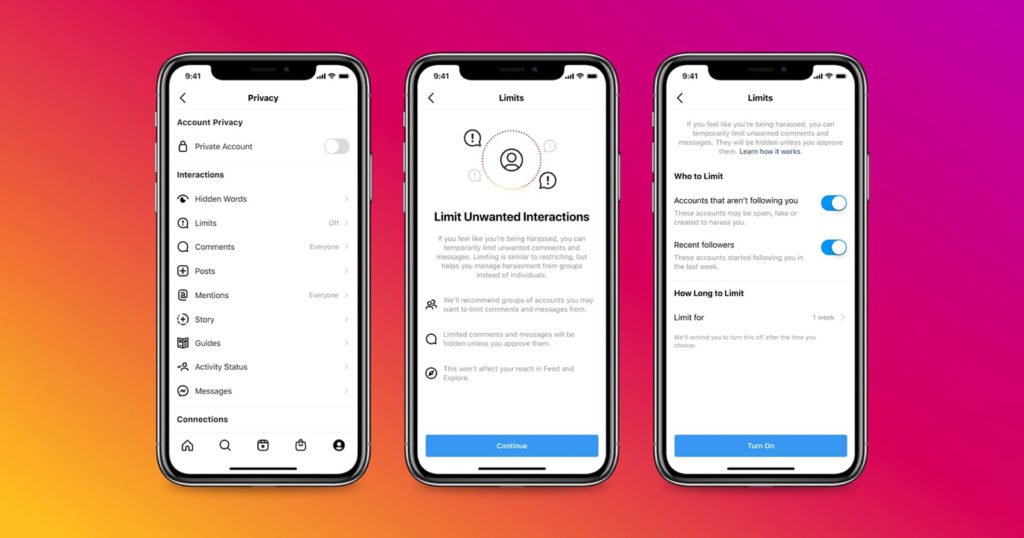 Instagram has announced a new feature that is designed to curb hate speech and protect users from abuse on the platform. Called “Limits,” the feature will automatically hide comments and DM requests from people who don’t follow a user.

The feature is designed to help protect specifically creators and public figures from what it calls a “rush of abusive comments” and direct messages that accompany certain high-profile posts. “Limits” is a feature the compabny says is easy to turn on and will automatically hide comments and direct message requests from people who don’t actively follow that account or who only recently started following them.

Instagram says that it developed the feature because it heard that content creators and public figures will sometimes experience sudden spikes of comments and direct message requests from people they don’t know. Sometimes these messages are positive, such as congratulations or support, but other times can be unwanted. To protect them, Instagram says Limits can be turned on to avoid this influx altogether.

“Our research shows that a lot of negativity towards public figures comes from people who don’t actually follow them, or who have only recently followed them, and who simply pile on in the moment,” Instagram says in a blog post about the update. “We saw this after the recent Euro 2020 final, which resulted in a significant — and unacceptable — spike in racist abuse towards players. Creators also tell us they don’t want to switch off comments and messages completely; they still want to hear from their community and build those relationships. Limits allows you to hear from your long-standing followers, while limiting contact from people who might only be coming to your account to target you.”

While most beneficial for those high-profile accounts, the feature will be available to everyone on the platform globally starting today. The feature can be toggled from privacy settings and the company says that it is working on exploring ways to detect when an account may be experiencing a spike in comments and direct messages and will proactively prompt a user to activate Limits.

The feature is in addition to another anti-abuse rollout that Instagram added in April called Hidden Words which allows users to automatically filter offensive words, phrases, and emojis into a Hidden Folder that will never have to be opened. Instagram has also added warnings in the app that detects abusive language and warns a person that they may be in violation of the app’s Community Guidelines. The warning used to show up after a second or third comment, but will now show up — stronger — the first time.

“We hope these new features will better protect people from seeing abusive content, whether it’s racist, sexist, homophobic or any other type of abuse,” Instagram says. “We know there’s more to do, including improving our systems to find and remove abusive content more quickly, and holding those who post it accountable.”