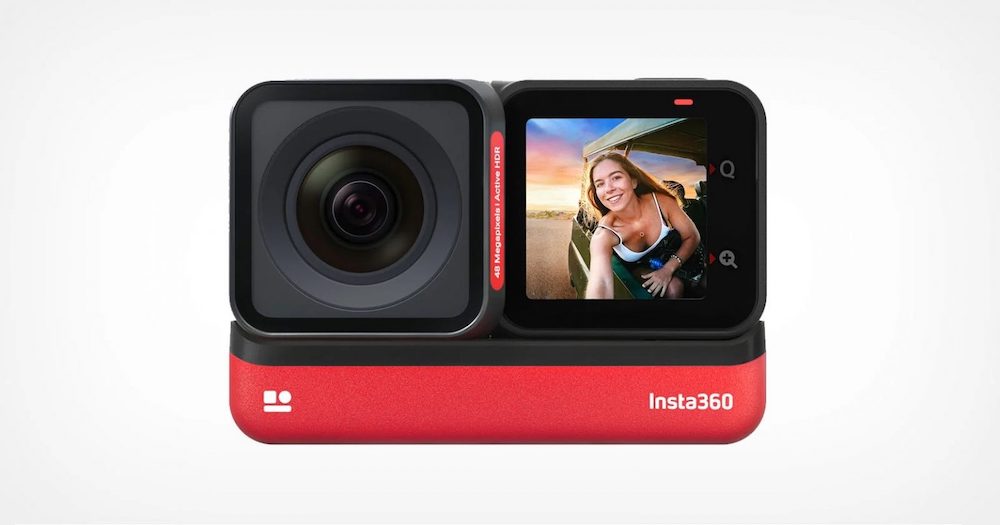 Insta360 has revealed its new 48MP ONE RS modular action cam, which is an upgrade of the ONE R, alongside a new 4K Boost wide-angle lens.

Like its ONE R predecessor it features the same modular combination of a battery, processing unit and a swappable lens module.

The Insta360 ONE RS features an upgraded processor (aka the Core) to support in-camera ‘FlowState’ video stabilization.

It also has ‘Active HDR’ video capture, which is aimed at handling the shooting of action sports without ghosting issues.

Insta360 says the ONE RS has ‘game-changing versatility’ thanks to its design.

You can watch the official Insta360 ONE RS launch video below…

The new sensor and lens modular part is called the 4K Boost Lens.

The camera has a 1/2-inch 48MP sensor that allows it to capture action shots at up to 4K 60p along with ‘best in class’ 48MP photos.

In contrast to HDR modes that Insta360 says are found on other action cameras, Active HDR is specifically designed for capturing action.

The 6K widescreen mode utilises the 48MP resolution sensor to output ultra-high-resolution 6K footage in a 2.35:1 ratio, to achieve a cinematic widescreen look.

The new Core, where the ONE RS’s processor lives, features several upgrades over the ONE R.

The ONE RS’s Core allows for a new ‘Instant Zoom’ function, which allows filmmakers to digitally zoom up to 2.7x while recording videos for creative effects.

The ONE RS also has a quick menu that lets users rapidly access preset shooting modes.

As mentioned previously, the new Core has allowed Insta360 to add its FlowState Stabilization technology into the ONE RS. This means enhanced stabilization is now applied in-camera, instead of via an app.

Insta360 also says footage shot with the ONE RS is smoother from the point of capture and no longer needs to be processed afterwards.

It has an additional microphone that Insta360 says will result in ‘crisper, more true-to-life audio.’

The upgraded Core is also capable of 50% faster WiFi connections.

Insta360 also claims that no matter how much the camera is rotated during a capture session, 360-degree horizon levelling ensures that the video is always ‘magically’ level.

This feature is available on all three ONE lenses but doesn’t happen in-camera.

Levelling can be activated via a switch either in the Insta360 app or via the company’s desktop software.

The Insta360 ONE RS Twin Edition

The camera’s Mounting Bracket has also been redesigned to allow for switching lenses more easily and more quickly through a quick-release mechanism. It also has a new windproof mic cover and heat-dissipating panel.

The new system is waterproof down to 16 feet.

The One RS can also function as a webcam when it is connected to a computer.

The fact that the ONE RS has a modular design means the new lens and Core are compatible with the previous ONE R camera.

The company says this enables those who have that camera to upgrade their camera at their own pace without feeling they have to buy an entirely new system.

The existing 5.7K 360 lens and the 5.3K wide-angle lens, which was co-engineered with Leica, work with the new camera.

The Insta360 One RS has multiple purchasing options that are available from today’s launch.

The Core, battery, and Mounting Bracket are also available to purchase as a bundle.

Best cameras for vlogging and how to get started