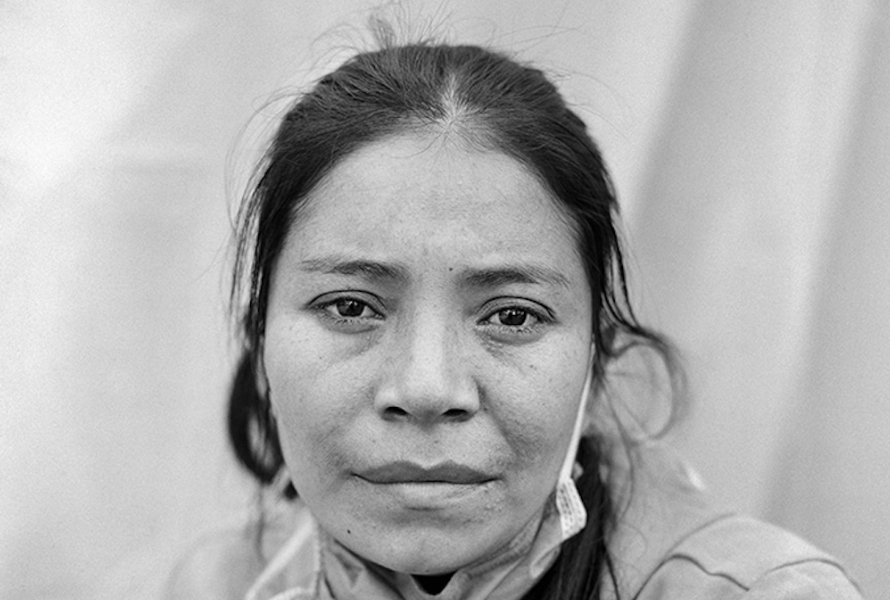 Adam Ferguson has been named Photographer of the Year in the Sony World Photography Awards 2022 for his project Migrantes, which is a series of black and white portraits of made in collaboration with the subjects, who were migrants waiting to cross into the USA from Mexico.

Ferguson set up the equipment and scene, and then allowed the individuals in the images to choose the moment to capture their own self-portrait image.

Mike Trow, the chairman of the Professional competition judges, commented, ‘By giving his subjects the shutter release, Adam hands a certain power to the sitter to make that decision on how to be perceived. These photographs are beautiful, meaningful and kind.’

The series by Australia-born Ferguson also triumphed in the Portraiture category of the awards.

As well as winning the Photographer of the Year title, Ferguson has won a $25,000 (USD) cash prize and a range of Sony digital imaging kit.

Migrantes is a series of black and white self-portraits of migrants in Mexico, taken as they waited to cross the border into the United States.

Ferguson setup the scene for each image, mounting a medium format camera on a tripod with a cable release and then stepped back, allowing the individuals to choose the moment of capture and participate in the process of documenting their lives.

In February 2021, after a change of presidential administrations in the US, migrants from Central and South America surged on the US-Mexican border.

Photographs of fraught migrants carrying their belongings, clinging to loved ones and caught in the flashes of photographers’ strobes were circulating in the media.

Stephanie Solano, age 17, from Zacapa, Guatemala. She takes a portrait of herself at an informal migrant camp at a municipal park in Reynosa, Tamaulipas, Mexico on 3 May 2021. Series Name: Migrantes. © Adam Ferguson, Australia, Photographer of the Year, Professional, Portraiture, 2022 Sony World Photography Awards

While Ferguson noted the importance of this photojournalism, he noticed a distinct lack of photography from the Mexican side of the border, especially images that gave the migrants any measure of agency.

With this in mind, Ferguson pitched the project to his editor at The New York Times and secured the commission to travel to Juarez and Reynosa, Mexico, for 11 days over April and May, 2021.

His approach to the project was inspired by Adam Broomberg and Oliver Chanarin’s Ghetto – a visual journey through 12 modern ghettos including the Rene Vallejo Psychiatric Hospital in Cuba in which the former artist duo gave patients control over the release shutter.

Accompanied by Mexican journalists Ernesto Rodríguez, Silvia Cruz, Noe Gea Medina and Laura Monica Cruz Flores, Ferguson approached migrants staying in shelters near the border, recording their often harrowing stories and working with them to stage and capture the image in a relaxed space where they’d feel less self-conscious.

He chose black and white film as a way of cancelling the chaotic medley of background colours and stripping the image down to its emotional value.

The resulting series presents a poignant portrait of people suspended in time while in search of a more prosperous life.

Mike Trow, chair of the 2021 Professional competition, explained, ‘What Adam Ferguson has done on the US/Mexico border with migrant families and individuals is deeply compassionate and moving. This set of portraits speaks volumes about how moral intentionality and respect can help avoid some of that sense of manipulation and invasion of the private which photography is often accused of. There were other stories that we as a jury admired deeply but Adam’s series stood out because it speaks so eloquently and warmly of people under hardship but who hold on to their decency and love regardless of place and wealth.’

Commenting on his win Ferguson said, ‘Through collaborating with migrants, this series of photographs was an attempt to make images that inspired empathy, rather than sympathy. By surrendering the control of capture and giving each migrant agency in the process of their representation, I hoped to subvert the narrative of marginalisation and create a story that felt more human, relatable and honest. I’m grateful to the brave and resilient individuals who agreed to work with me, and receive this award on behalf of them also. Winning the Photographer of the Year award gives this story another life. It allows a new audience to connect with the important stories of the individuals who shared their story with me.’

The competition had over 344,000 entries in total from more than 200 countries and territories around the world.

See below for all of the other category winners, along with the stories of the entries from the photographers themselves…

The Open competition celebrates the power of single images.

Scott Wilson is Open Photographer of the Year 2022 for his photograph titled Anger Management, which was entered in the Natural World & Wildlife category.

The photo is a photo montage of a historic village house and local forests and plants taken in the Croatian agricultural region of Slavonia. The photo is part of a broader story about the mass exodus of people from the region. The photo montage was created in 2021 and its parts were shot in 2020 and 2021. Image: © Domagoj Burilović, Croatia, Winner, Architecture & Design, 2022 Sony World Photography Awards

Burilovic explained, ‘Dorf is the German word for village. In the 19th Century, the Croatian region of Slavonia was inhabited by people from all nations of the Austro-Hungarian empire. German colonists made the largest cultural impact through language, crafts and architecture. With the extinction of the village, the historic houses that became part of its cultural identity are the first to decay.’

Stakle revealed, ‘I am interested in the fate of canonised artistic, scientific and journalistic images and their potential to embody contemporary meanings. For my collages, I have used images from the open source collections at art museums, scientific institutions and image banks, whose archives may be considered iconic testimonies of the present and the past.’

A young girl being transported home by her dad along the garbage site, on the abandoned airstrip outside Maicao in Colombia. More than 8.5 million people in Colombia urgently need help. The financial collapse in Venezuela has left many with no access to emergency aid, shelter, clean drinking water or food. Children pay the highest price. © Jan Grarup, Denmark, Winner, Professional, Documentary Projects, 2022 Sony World Photography Awards

Winner – Living in the Transition by Shunta Kimura

Kimura revealed, ‘Gabura Union is located on the south-western coast of Bangladesh. It is one of the most vulnerable areas to the impacts of climate change, and many residents often suffer from its effects. The purpose of this photo essay is to capture and communicate the situation for people living quietly in this transition, impacted by climate change.’

Lorenzo Poli said, ‘Science and religions may all fall short in explaining the incredible miracle of life which, through millennials of evolution, has transformed barren land into a living planet. There is an untamed world between sacred and magic, where the essence of life is safeguarded by silence, where the outer and the inner world coincide. This is what I am seeking to photograph.’

Smokey. Hugh Fox explained, ‘During lockdown, I photographed my family a lot – this is our cat, Smokey, who spends a lot of his time doing this. It’s something we all ended up doing a lot of…’ © Hugh Fox, United Kingdom, Winner, Professional, Portfolio, 2022 Sony World Photography Awards

Hugh Fox explained, ‘It’s a selection of images taken over the last couple of years. For me, this series evokes the quiet, isolated, reflective moments I felt during the pandemic.’

Ricardo Teles revealed, ‘The Kuarup is a ritual of the Xingu Indigenous Brazilian to honour the illustrious dead – it is the farewell and closing of a mourning period. The celebration takes place once a year in different villages, and lasts for three days. The highlight of this celebration is a competition of a martial art called Huka-huka, similar to the Greco-Roman wrestling fight, which has competitive symbolism that shows the strength and virility of the young men.’

Ogata and Portail explained, ‘These images were taken in a studio in Paris, in September 2020 – for the pure creation of a still life photo.’

Observing Fox. Milan Radisics explained, ‘Roxy stares at the camera from the base of a moss-covered linden tree. The fox is hiding behind the tree observing my window and trying to decide whether it’s safe. When we first became acquainted, any sudden movement would make the fox rush to a corner of the courtyard to hide behind the bushes. Learning from this, I stayed behind the window to follow Roxy’s undisturbed behaviour.’ © Milan Radisics, Hungary, Winner, Professional, Wildlife & Nature, 2022 Sony World Photography Awards

Milan Radisics revealed, ‘Over eight months, I spent almost every night sitting at the window of my cottage in the middle of the forest – where wild animals live almost as neighbours of the villagers. The young vixen appears in the village after dusk, circles an hour-and-a-half, and appears in a courtyard several times. I set the lights in advance, like in a studio, and waited for the protagonist to walk into the scenes.’

Winner – The Identity of Holland by Ezra Bohm

Ezra Bohm, of the Nederlandse Acedemie voor Beeldcreatie, has been awarded Student Photographer of the Year 2022 for his series titled The Identity of Holland. Bohm photographed the residents of close-knit communities in the Netherlands, who maintain a traditional way of life.

Taken in April 2021 in Hanoi, Vietnam. This photo is the front photo of my Under The Moonlight series by Tri Nguyen. © Tri Nguyen, Vietnam, Youth Photographer of the Year, Youth, 2022 Youth competition – Portraiture, 2022 Sony World Photography Awards

Tri Nguyen (18-years-old) has won Youth Photographer of the Year 2022 for his image Under The Moonlight. The photograph depicts a young man basking in artificial moonlight standing against a derelict background.

The Youth competition shortlist featured seven category winners from June to December 2021, who each responded to a different monthly theme.

The Youth Photographer of the Year was judged by Hideko Kataoka, Director of Photography at Newsweek Japan.

Tri Nguyen will receive a range of Sony digital imaging equipment to nurture their vision.

An exhibition of the winners and shortlisted work from the 15th Sony World Photography Awards will take place at Somerset House, London from 13 April to 2 May 2022.

The exhibition features over 300 prints and hundreds of additional images in digital displays from winning and shortlisted photographers.