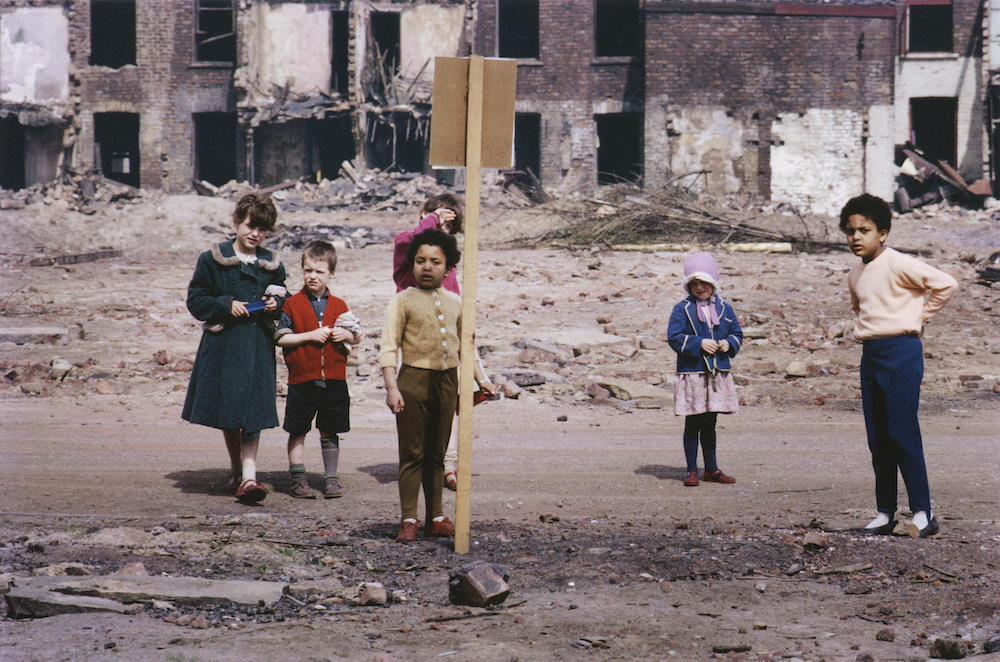 Iconic British photographs feature in the new exhibition, Postwar Modern: New Art in Britain 1945-1965, at the Barbican Art Gallery in London, from 3 March to 26 June 2022. Warning: this page is likely to be unsuitable for viewing at work.

This major exhibition showcases art produced in Britain during the 20 years after the end of the Second World War. It brings together around 200 works of photography, painting and sculpture by 48 artists, drawn from public and private collections from around the world.

Much of the work is little known, never having been included in an overview such as this, while other works are exhibited for the first time.

In the aftermath of a cataclysmic war that called into question religion, ideology and humanity, there followed the consequences of conflict: continued austerity, the Cold War, nuclear threat and the dismantling of the British Empire.

These conditions – of past horror, continued anxiety and future promise – gave rise to rich new imagery, art forms and materials. Artists in Britain sought to establish meaning and purpose and to reimagine the world around them.

Postwar Modern focuses on the ‘new’ in this period: work created by artists who were shaped by their direct experiences of the war, its global impact and aftershocks, at a formative stage in their development.

Jane Alison, exhibition curator and head of visual arts at the Barbican, revealed, ‘I had a strong sense that art in the 20 years that followed the war was more vital, distinctive and important than has been previously appreciated. The key to unlocking that was to focus on “the new”, to pay close attention to a defining sensibility, and to include previously marginalised figures in dialogue with those whose contributions are widely celebrated. I hope that Postwar Modern, which so resonates with a Britain struggling to overcome crisis, will be a revelation.’

Divided into 14 thematic sections, the exhibition draws out the particular subjects that preoccupied artists in the postwar period, including the body, the post-atomic condition, the Blitzed streetscape, private relationships and imagined future horizons. By reframing the art within thematic categories that reflect and amplify these concerns, well-known figures can be considered in a new light.

The exhibition celebrates an array of artists in both expected and unexpected groupings. In ‘Post-Atomic Garden’, Bert Hardy’s photographs of bombed-out Birmingham are found alongside the sculpture of Lynn Chadwick, the paintings of Prunella Clough and the collages of Nigel Henderson.

Street Scene, Hulme, Manchester. A group of children standing by a sign in front of a ‘cleared’ row of houses, the shells of houses due for demolition behind, 1965. Image: Shirley Baker Photography © Nan Levy for the Estate of Shirley Baker

Shirley Baker’s iconic colour photography is shown alongside the lesser-known paintings of Eva Frankfurther, while the intimate gaze is explored by bringing together Bill Brandt, Lucian Freud and Sylvia Sleigh. Three paintings from Francis Bacon’s Man in Blue series (1954) and two early paintings by David Hockney (1961-2) are exhibited together in a section devoted to expressions of male same-sex desire.

Postwar London, with its emerging arts scene and pockets of progressive attitudes, was an obvious destination for many artists featured in Postwar Modern. It was a magnet for ambitious artists from across Britain as well as those arriving from Europe and from current or former colonies.

During this period the Barbican Estate was first conceived, to occupy what was an enormous bomb-site in the heart of London. Postwar Modern opens as the Barbican Centre celebrates its 40th anniversary, a reminder of the Brutalist spirit that was central to this moment.

Postwar Modern: New Art in Britain 1945-1965 runs at the Barbican Art Gallery, London, from 3 March till 26 June 2022. It will also be accompanied by a book and a programme of events that will be updated on the website as confirmed. Check out Postwar Modern at the Barbican for full listings.

New documentary on Picture Post – we meet the director