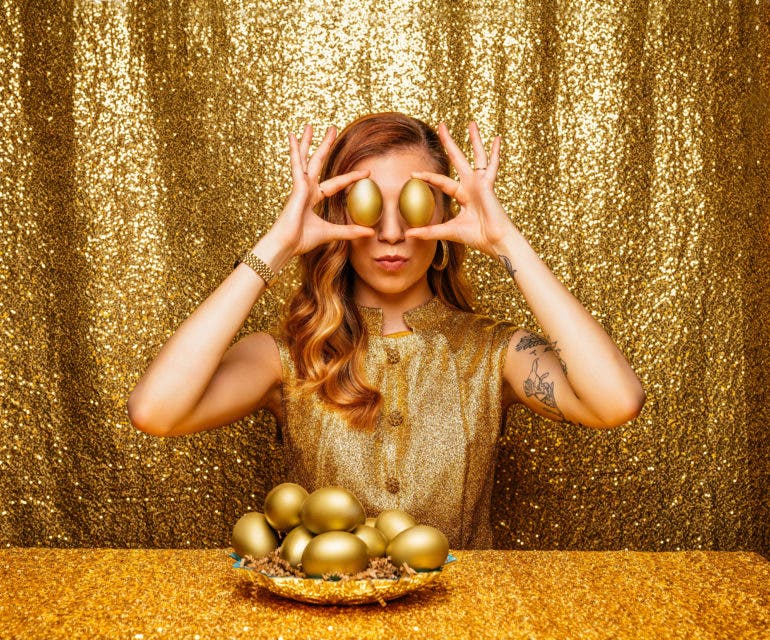 “I’ve actually noticed my images becoming a lot bolder, louder, over the last couple of years,” says photographer Ian Pterrigew. “I’m not sure how you’d subconsciously analyse that.” Ian is a fascinating photographer who has measurably evolved over the years. We initially featured him when talking about the Salty Girls photo project. Then there was Salty Kids, and we saw his Floating Dogs photo project. Today, we’re spotlighting his recent Quarantine project. The Canada-based creative always has some of the most fascinating stories. And this one is no exception.

The earliest 2 were the Nun and Queens gambit, that was Sony A7rII, after that I switched to the Leica SL for the Audrey Hepburn and the the Leica SL2 for the rest of the images. The Sony I used a Sigma Art 35mm, and for the all the Leica shots the Sigma Art 50mm. I was a 35mm shooter for years and just decided to switch it up to 50mm. All the pics except for the Dorothy pic qere 1 light: PCB Digibee with large Rotalux deep octabox. The Dorothy pic had 2 lights, using the large octabox and a strip light for the legs. I always shoot tethered with a 16” MacBook Pro using Capture One.

Ian Pettigrew: Maybe in the months leading up I was struggling to find the next thing. I was dealing with some personal stuff, and was  maybe feeling uninspired. Necessity is the mother of invention, as it says. Being in a lockdown situation, and luckily enough being with your girlfriend/muse/model gave us lots of opportunity to explore creatively.

The Queen’s Gambit is the obvious lockdown one, but also exploring Wizard of Oz and Breakfast at Tiffanys. We also moved in the middle of the first lockdown, into a much nicer space with great high ceilings. I can’t begin to tell you – as a portrait photographer – how awesome and inspiring high ceilings are.

Phoblographer: These images are of your partner, Nicole. They’ve got themes and centered around certain colors. Where did the idea for this series come from?

Ian Pettigrew: Orange or yellow might have been our first shoot, I can’t remember now. I have an old Fisherman’s yellow raincoat I thought would be a good idea for a monochromatic shoot, but it morphed into using foods that corresponded with the colour we chose. There were a few colours I wasn’t 100% happy with that I am still planning to reshoot. Maybe it was the food, or maybe the outfit didn’t work well. Pink was one colour that I wasn’t happy with. Lockdown was maybe good for inspiring creativity but not always great for shopping for stuff you need. Once we got going, after 2-3 colours both of us were like ‘Damn, this looks pretty good. Whats next???”

Phoblographer: We’ve featured you a few times. Overall these images feel very “Ian Pettigrew” but there’s been an evolution as well. With Salty Girls, you centered on placing the women with Cystic Fibrosis at the fore. Then with the Floating Dogs project, you worked with pastels. This Quarantine project is very bold and bright. Have you personally thought about colors differently?

Ian Pettigrew: I’ve actually noticed my images becoming a lot bolder, louder, over the last couple of years. I’m not sure how you’d subconsciously analyse that. SaltyGirls was certainly a very heavy and emotional project, and right after that I also started one (but never expanded on fully) with veterans of various conflicts (WW2, Korea, Vietnam). The Floating Dogs was supposed to be a mental antidote to that heaviness – the dogs were only meant to put a smile on your face, nothing else.

I think the expansion of using much bolder colours came of the Floating Dogs, but I also have to credit Nicole (@nicoley_shmoley) for helping to inspire me. Sometimes you are only as good as your muse.

Phoblographer: Talk to us about your ideas on the cropping and framing. You’re putting things very front and center plus using a lot of square crops. Is this because of social media or are you changing things up?

Ian Pettigrew: I always look at my shoots first and foremost as a graphic designer, which is what I am actually by trade (and education). So the props, colour styling – putting things font and centre – really comes from that background. Certainly social media has influenced how photographers display their final image, tweaking pixels, colour etc. That includes crop. I shoot full frame in RAW, always, but I have my viewfinder set to 4:3, and sometimes square.

I think square is sometimes a holdover from the my 90s days of shooting with Hasselblad so much. I just prefer that crop to anything else.

Phoblographer: So, how much stuff was needed to shoot these photos? It looks like a lot!

Ian Pettigrew: I’ll give you specific examples of what we needed. Firstly, Nicole loves vintage stuff, so some of the outfits were hers and some were from a local shop (@vintagesoulgeek) who are always great with our collaborations.

The Gold Dress is from them, as is the silver dress. For the full gold photoshoot, I bought a cheapo gold backdrop and wanted to use golden eggs. But first I used just foam eggs from a craft store, and found out the hard way you cannot spray paint foam.

So the final eggs used are actually duck eggs, which are slightly larger and a lot smoother. Nicole’s favourite film is Wizard of Oz, so she actually had that dress custom made, courtesy of a fantastic local designer, Mallory Gosselin (@malmaldude).

The basket we sourced locally, and of course we had vintage red shoes handy. Luckily we also had our cat Jack stand in as Toto. All the backdrops in every photo are mine; I have a great collection I’ve amazed over the years.
The Nun shoot (which was the cover of Capture Magazine, Australia) was my homage to the photo duo Pierre et Gilles. That’s a stuffed bird a friend had that was shot separate and photoshopped onto her hand. Nun outfit via Amazon.

All images used with permission from Ian Pettigrew. Want to get featured? Here’s how!