How to use flash on location – Amateur Photographer 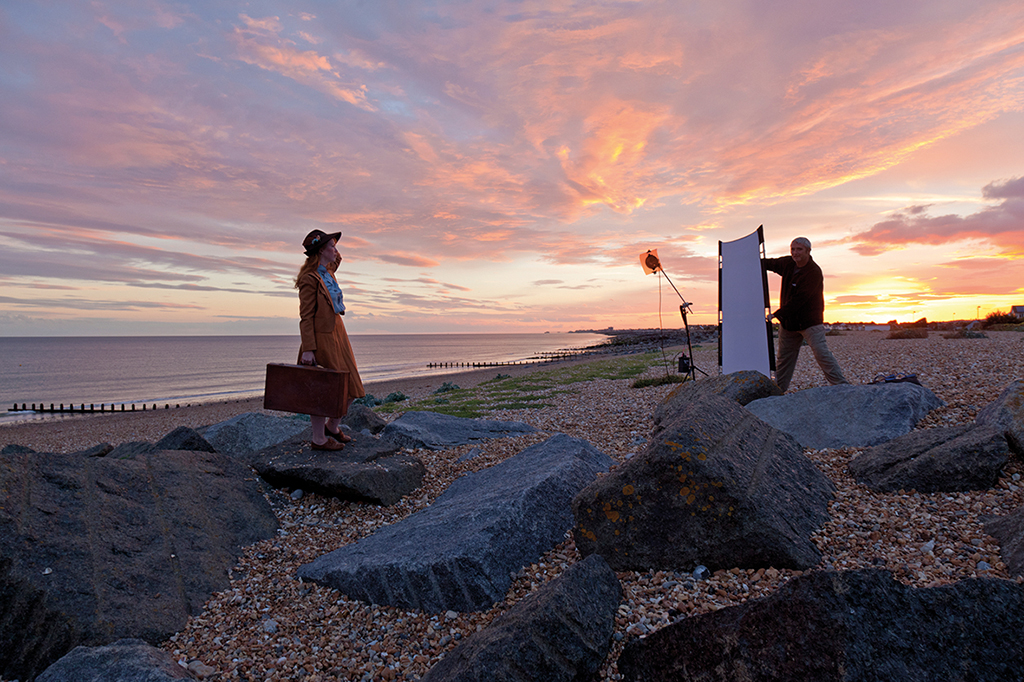 Ian is a seasoned photographer based in Sussex. He works across a number of industries and runs a creative studio. To see his work, visit www.winephotos.uk or Instagram @packs.hacks.

Since the invention of the electronic flash tube in the 1930s by Harold Eugene Edgerton, photographers have largely been dependent on working with flash where there’s an AC mains supply.

Portable battery flashes or strobes have been around for many years, with Quantum and Norman leading the field. Working with flash outdoors and on location was popularised by US-based newspaper photographer David Hobby when he began blogging about his photographs, creating lighting diagrams and talking about how the images were created on his Strobist blog. This inspired many photographers to light outdoors and on location.

The sun light was visually weak, so I used an Elinchrom battery flash with an 18cm reflector and a LEE Filters 775 Soft Amber Key 2 warming gel with combined frost diffusion to simulate the setting sun, which had been flagged from the model with a Sunbounce Pro 6x4ft reflector pane

High-speed sync and lithium-ion battery technology have revolutionised portable flash and there is a wide choice of outdoor battery flashes available, with the power of the units ranging from 100Ws of energy up to 1200Ws. Portable battery flashes come in two forms: the mono bloc where the flash, electronics, battery, and receiver are contained in one unit; or the head and power pack where a separate flash head receives power from a separate pack which contains the receiver, battery, and electronics.

Prices vary from around £250 for a 200Ws TTL system flash to over £10,000 for high-end kits! Some online retailers offer a ‘try before you buy’ facility and there are many camera shops you can visit to handle gear before buying.

Portable flashes are triggered by radio transmitters which ‘talk’ to the camera exposure system. Each camera manufacturer has their own proprietary system for TTL (Through The Lens) flash exposure calculation so it’s essential that you buy the correct trigger for your camera system. Most battery flash systems intended for outdoor use enable the photographer to calculate flash exposure relative to the ambient light automatically. Once the exposure has been calculated, many systems now allow you to lock the flash exposure to manual mode. Manual flash provides constant output not influenced by the tonal values in a frame as TTL auto exposure flash does.

High-speed sync first appeared with the launch of the Nikon SB-25 on-camera hot shoe flash in 1992. The SB-25 was the first portable flash to synchronise with the camera shutter over the native flash sync speed without a black band appearing across the frame.

Flash sync is the electronically controlled feature which controls the camera shutter and flash, ensuring they fire together or synchronised. Most DSLR and mirrorless cameras have a native sync speed between 1/100sec and 1/320sec. This is limiting creatively when faster shutter speeds are desired, such as working with a wide aperture in bright sunny light conditions.

Conventional flashes fire a single pulse during the exposure sequence. With shutter speeds higher than the camera flash sync speed, the flash pulses throughout the shutter sequence ensuring the whole frame is exposed

For example, you may want to create a portrait outdoors with an out-of-focus background. Typically, when using your camera’s native flash sync shutter speed of 1/125sec, the recommended aperture could be f/11. If you want to use an aperture of f/2.8 you’ll need a shutter speed of 1/2000sec, a five-stop difference. To do this you set your flash to HSS – High Speed Sync. In the simplest form, instead of the flash firing once the sensor is fully exposed by the shutter curtains, the flash fires during the full travel of the shutter curtains across the sensor.

Shallow depth of field (DoF) draws the eye to the subject and reduces background distractions. This portrait was shot in a relatively short time with a Canon EF 85mm f/1.8 prime lens on a Canon EOS 5D Mark II.

I set the aperture to f/3.2, shutter speed to 1/1000sec and a low ISO of 160, with daylight white balance. As time was short I set the camera to aperture priority mode and the flash to TTL. The flash was a Pixapro PIKA200 with 48cm beauty dish octa modifier triggered with an ST-III trigger. To darken the busy garden background I dialled in minus 1.66 stops of camera exposure compensation, with no power increase or reduction on the flash.

Using a relatively shallow aperture gave depth of field from the tip of the subject’s nose, throwing his ears and background out of focus. By positioning the battery flash about one metre away and 40cm or so above and to camera right, 45º down has given sufficient shadow for definition and eliminated any specular reflection from the gentleman’s spectacles. The modifier was centred on the subject for optimum illumination.

The raw image was processed in Adobe Photoshop and graded using LUT. I then used black & white adjustment layers to reduce saturation. A garden building to the right of the frame was removed by painting into a new adjustment layer.

All the gear used for this image was carried in the Think Tank Photo Urban Disguise 40 shoulder bag, which then provided stability at the base of the light stand.

Weighing in at 550g and a shade under 500mm long, this will cope with lightweight battery flash kit, especially those with a remote pack for ballast.

As lighting accessories go, this relatively inexpensive gel kit has all the essential colour correction, diffusion, and colour effects gels in one convenient pouch.

600Ws enables photographers to work in bright sun with wider lens apertures. The ST-IV trigger has a facility to lock TTL exposure to Manual.

The airline carry-on sized Peli 1535 Air Case is ideal for protecting and transporting precious camera and battery lighting gear. It offers protection from the elements and the rigours of location photography.

When shooting my initial exposure checks I will slightly underexpose the background. The amount of underexposure will depend on the tonality or brightness of the scene. With a darker background, the foreground will pop and add depth to the photo.

I am an advocate of testing light modifiers/shapers, practising ideas and techniques whenever possible. Willing models are not always available, so I use Fred. Fred gives consistency, enabling me to see the quality, quantity and colour of light.

Working on location with battery flash is liberating. Here I worked in a winery cellar with little space and no mains electricity. A flash with beauty dish and shower cap diffuser on a carbon fibre light stand enabled me to position the battery flash with ease.

Using a shutter speed longer than 1/60sec is known as ‘dragging the shutter’. Combining a slow shutter speed with flash in a dark environment allows movement to be recorded as a blur. For this image I set the exposure to 1/5sec at f/6.3, ISO 250.

A more powerful battery flash enables you to freeze action with a short flash duration. The 600Ws flash (used at a safe distance) for this photo was aimed from below the subject to light his face under the helmet. Exposure was set to 1/1000sec at f/7.1, ISO 100.

Even a dull day can be made brighter by using a battery flash. The colours in this shot without flash and reflected light were dull and lacked impact. I decided to lift the image by using a 65cm 16-sided soft box as it brightens and saturates the colours.

Most battery flash systems now have TTL metering linked to the camera, enabling the photographer to judge exposure using the camera display or histogram.

If you’re methodical, judging exposure suited to the image is relatively straightforward if you follow these steps. Assuming the camera and flash are set up, the trigger is attached to the camera hot shoe, and all switched on:

1. With the camera set to Aperture Priority TTL with no exposure compensation, fire a frame. Check the resulting frame. Does it look fine, too dark or too light? Remember that TTL metering relies on reflected light which can be affected by the tones in a scene. You may want to make the frame lighter or darker using either exposure compensation or switching to manual mode.

2. Switch on the flash and fire a frame with the flash in TTL mode. In bright light a higher shutter speed than the camera flash sync speed, depending on the chosen aperture, may be required. Some flash TTL triggers need to be set to HSS, others detect the camera shutter speed automatically. Is the flash part of the image fine, too dark or too light? Use the flash power compensation on the flash trigger to increase or decrease the output.

3. Fire another frame; if all is good, most flash triggers have a button where you can lock the flash power to manual. Doing this gives consistency of exposure not affected by the tones in the frame.

4. You are now ready to shoot. Throughout the shoot monitor the images on the camera display. On bright days it’s worth using a shaded viewing loupe such as the Hoodman Hoodloupe to view the display or histogram.

This is Dr Gregory Dunn, head of wine division, Plumpton College. We wanted a portrait with a difference to introduce Gregory. The TTL exposure using the sun as a back light left his face in deep shadow.

I used a Pixapro CITI600 TTL with a silver 60cm collapsible beauty dish as a key light on his face, maintaining exposure balance with the background

Plenty of practice and understanding your gear are the key to successful outdoor and location flash photography. I use a polystyrene dummy head for testing ideas and light modifiers or shapers. By building your confidence and understanding, you’ll find tools and solutions which will make working outdoors and on location a pleasure. It’s possible to get a camera and lighting kit into an average camera backpack or airline carry-on sized case.

Get amazing images with simple lighting