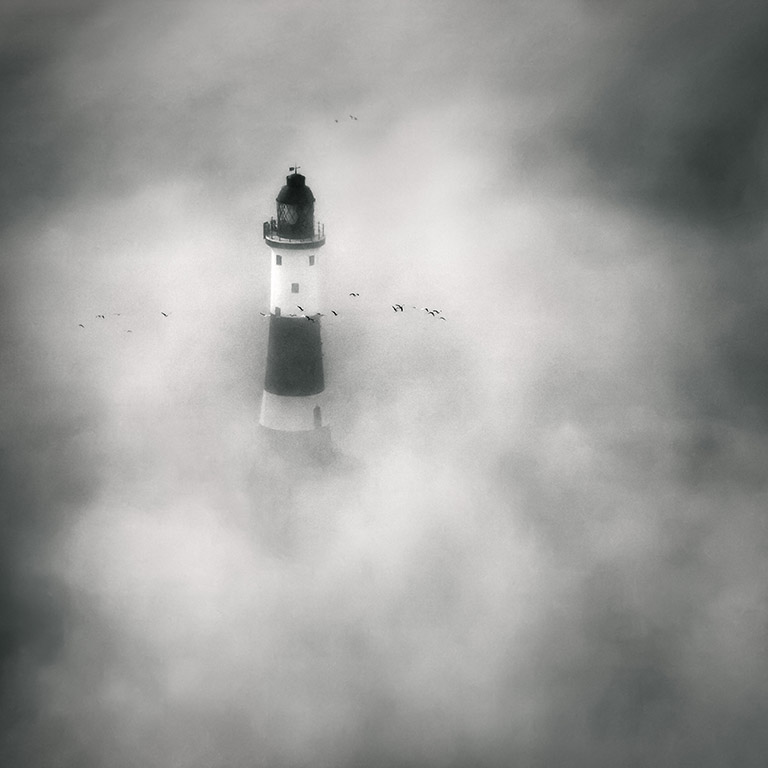 For someone who describes themselves as ‘a poor swimmer and a poorly sailor’ it seems incredible that award-winning coastal and seascape photographer Rachael Talibart chose the sea as her muse. ‘I’m afraid of the sea,’ she laughs. ‘I think it’s dead scary, but that’s part of its appeal to me. You feel very alive when you’re afraid.’

A former solicitor, Rachael has spent a large chunk of her life at university, where she studied the sublime – a term sometimes used to describe the delicious terror we experience when faced with nature at its most forceful and immense – think mountain ranges, deep chasms, raging seas etc. ‘My big wave pictures are hugely informed by the fact that I’m afraid of the sea,’ she reveals. However, this fear is matched by a deep respect and an even greater love for the ocean.

When Rachael decided to take her coastal and seascape photography more seriously in 2015, she embarked on a mentorship with fine art photographer Jonathan Chritchley. At this point she was selling the occasional print and running a few workshops, but the returns barely covered her expenses.

‘I would not have described myself as even a semi-pro back then,’ she admits. So, to invest a considerable sum of money in her photography was a big commitment. But, having been on workshops with Jonathan in the past, she was confident that with his advice and a lot of hard work, she could move her photography up to the next level. ‘Psychologically it was huge,’ she recalls, ‘It was me saying to myself, right you’ve made the decision, you want to go for it, commit fully and make sure that you’ve got something to lose.’

Photograph what you love

Jonathan sent Rachael a detailed questionnaire, and designed a bespoke programme based around her responses. ‘Some of the stuff he got me to do seemed a bit strange, but I trusted that he had a plan, and he did,’ she recalls. One piece of advice that struck a chord was, ‘photograph what you love.’ The more Rachael thought about it, the more her mind (and heart) came back to the sea. ‘Everyone is trying to find their voice and one of the easiest ways to do it is to focus on what you love,’ she suggests.

‘Try and think of a thing that you could spend longer looking at than anybody else without getting bored, that way you will see more, explore a subject more, and you will find new ways of expressing it. I think you have to have something to say in your photographs apart from “this is what it looked like”.’

Return to the same place

Rachael can happily spend all day at the beach – once she was even lulled to sleep by the sound of the waves in the Outer Hebrides. Scotland’s Western Isles are just one of four locations that she returns to regularly (the others being Sussex, Oregon and Portugal), and this familiarity, coupled with the knowledge that she will return, enables her to relax and to be more experimental. ‘Many of my best photographic moments have happened on the beach closest to where I live,’ she says.

‘On the rare occasion when I find myself somewhere new, I work better by promising myself I will be back.’ This approach allows Rachael to focus on small details – water washing over a shell, or an abstract painting of rust, for example – without worrying too much about whether or not she has captured the ‘famous big vista.’

These quieter shots, often created at the tideline, are particularly rewarding for Rachael. ‘You can capture that moment nobody else has seen, before the tide washes it away,’ she suggests. ‘No one will have photographed that particular shell as the sea did that particular thing around it.’ While these beautiful unplanned moments create unique opportunities, there are some things that Rachael never leaves to chance. ‘I would definitely never go out without knowing the tides, and I choose where I go based on that,’ she reveals.

Using an app called NAUTIDE, she can see what the tide is doing two years in advance, which is essential when scheduling trips and workshops. ‘Knowing the tides drives what I do much more than the weather forecast,’ she reveals. In fact, while plain, blue-sky days might be off-putting for some photographers, Rachael urges everyone to get out with the camera anyway. ‘If you’re pointing down at a shell, or a detail, it doesn’t matter what the sky is doing,’ she assures.

Of course, another reason for checking the tides is safety. ‘As I said before, I am very afraid of the sea, so I take safety seriously,’ says Rachael. ‘Knowing your location really, really well certainly helps, but I would also advise standing a bit further back than the closest you think is safe, because when you’re concentrating on taking photographs, and you’re in the zone, you forget about everything around you.

What’s more, if you’re using a long lens, you’ll be concentrating on a small part of the sea and you might not be aware of what the rest of the sea is doing. I definitely think it’s wise to keep looking.’ Of course, ‘being in the zone’ is what many of us crave, but not paying attention to our surroundings can have dire consequences. In Newhaven, for example – where Rachael shot her Sirens series – lives have been lost to the sea. ‘I have seen some mad things down there,’ Rachael warns.

While Rachael has never been in any serious danger at the coast, she admits to being ‘surprised’ by a wave in Portugal, leading to an expensive camera repair bill. ‘I’ve tested the weather-sealing on the Canon EOS 5DS R thoroughly, and I can tell you it works!’ she laughs. ‘The only thing you can’t do is immerse it in the sea!’

‘The lens I use most has changed over time,’ she explains. ‘When I started out, the 16-35mm would have been my go-to lens, and it still is if there is an amazing sky, but over time I’ve found myself using ever-longer focal lengths. I really enjoy shooting with the 100-400mm at the long end, picking out patterns on the surface of the sea or in the waves, for example.’ If the spray is strong, Rachael uses an inexpensive Op/Tech rainsleeve to protect her gear.

At a time like this, experiencing the vigour and majesty of nature is a genuine tonic. ‘Nature is therapeutic and redemptive,’ says Rachael. ‘As a species we have become disconnected from nature and it has allowed us to abuse and exploit the natural world, rather than having a symbiotic relationship with it. I think the more time we spend in the company of nature the more likely we are to become the best version of ourselves.’ Surely, there’s no better reason to head to the coast.

Ask yourself what it is you love – it might be food, dance or, in Rachael’s case, the ocean. Find something you could spend a lifetime exploring without getting bored, and dedicate yourself to photographing it. The deeper you dig, the more you will find.

It’s all in the detail

If you shoot on a falling tide, interesting details will often be revealed on the rocks and sand. Rachael admits that she probably spends more time on these ‘quiet’ pictures than she does shooting ‘scary waves’. It’s also an ideal time to shoot because the sand will be free of footprints.

While Rachael isn’t fond of ‘chimping’ (constantly reviewing images on the LCD screen), she advises checking the histogram occasionally to avoid blown-out highlights. When storms are blowing through quickly, the sun is constantly peeking through the clouds, which can create problems on white foam.

Rachael likes to leave a long gap between capturing images, reviewing them, and editing them. By allowing these intentional pauses, the emotional high from the shoot dissipates and she can edit her work calmly and objectively. Generally speaking, she only spends 10 minutes or so editing a picture.

Never go out without knowing the tides, for safety and for photographic purposes. When there’s a big tide Rachael likes to go to Birling Gap, because more sand will be revealed (it’s predominantly pebbly), but if it’s shallow she prefers West Wittering – although on a big tide you have to walk out to get to the sea.

Perhaps unusually, Rachael finds it easy to switch between black & white and colour. To assist her, she shoots raw, but switches the in-camera Picture Style to Monochrome – that way she retains all the detail while being able to see what a later monochrome conversion will look like.

Rachael predominantly uses four lenses, but the Canon 100-400mm is her favourite for picking out patterns and details. She also uses a 24-70mm lens for ‘proper’ abstracts, as it allows her to get close to her subjects and is sharp from corner to corner.

For tide, wind and wave information the NAUTIDE app is hard to beat. Rachael used to use a simpler app that told her the times of high and low tide at locations, but it wasn’t enough. With NAUTIDE she can see tide heights and depths, and predict a big spring tide or shallow neap tide years in advance.

Rachael is a LEE Filters master and wouldn’t be without a set of grads in her kit bag. She often uses a 0.6 ND Hard Grad, but has recently gravitated towards a lighter version (the 0.3) for more subtlety. She also uses a 3-stop ProGlass ND and a polariser.

Op/Tech rainsleeves are super-cheap and can be screwed up and carried in your pocket. They feature a drawstring opening for a snug fit around lenses, and an opening for the eyepiece so you don’t have to look through a piece of plastic. Perfect for protecting your gear from sea spray.

The weather-sealing on the Canon EOS 5DS R has been put to the test countless times by Rachael and, apart from one immersion experience, it has never let her down. This DSLR offers 50.6 million pixels, and provides critical sharpness when she needs it the most.

How to take better sea shots