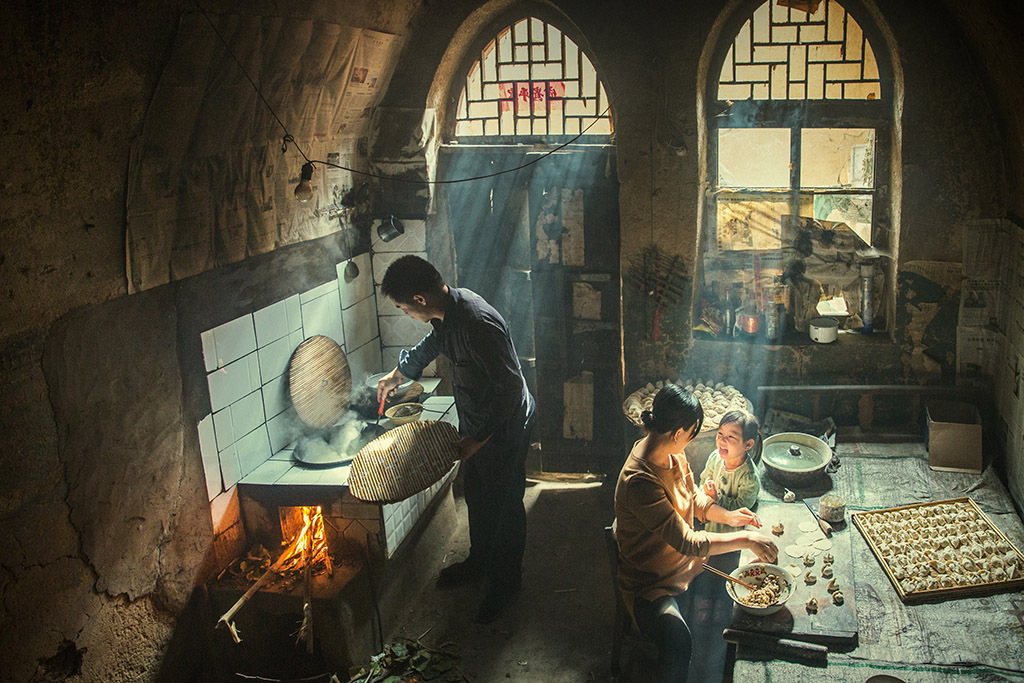 Food is such a delicious and wonderful subject to photograph, and there are a whole number of ways you can capture the subject as this year’s Pink Lady Food Photographer of the Year awards  reveals. From those delicious close-ups, to a more political and wider view of the subject, this feature shares the cream of the crop in food photography from a number of viewpoints and different cultures. Enjoy.

Marina Spironetti took first place in the brand new Claire Aho Award for Women Photographers, a category of the contest, and she tells us all about her winning image. ‘This image was part of a reportage project about the female butchers of Panzano in Chianti, Italy.

Dario Cecchini, the world-famous butcher, has been training a team of young women who come to Tuscany from all over the world to learn the art of deboning. Food and wine photography has always been an important part of my work as a photographer, especially in recent years.

Whenever working on a food story I am always intrigued by the human element. The main role of food is to nourish our bodies, a basic need for human beings, and I love to investigate the role it plays in our world. I am incredibly happy to have been the first winner of the Claire Aho Award, and to win with a shot of another woman. We all do different jobs, but our passion and strength are the same.’

With just one frame you can reveal a whole story as Li Huaifeng’s overall winning image called ‘Taste’ shows. This photo was taken in Licheng County, Shanxi Province, China, during the National Holiday of 2016 as part of his project on earth cave dwellings.

‘On the fourth day of the National Day holiday, the old couple’s daughter and son-in-law had come with their little girl to celebrate the old man’s birthday. It was amid the harvest season so the man had to return to the crops after a quick lunch, but his family stayed at home to make dumplings.’

To capture the opportune moment Li Huaifeng waited until the lid was removed from the steaming pot to enable the cascading light to pick up the steam. ‘During the process I tried not to interrupt them and captured the interactions between the mother and daughter so as to present a lively, natural and heartwarming picture.

I made the most of the natural light as it backlights the people, but also forms a diagonal line from the stove, which in turn leads the viewer’s eye to the centre of the image. The composition is also strong as the symmetry of the door and window offers visual beauty.’

Photographer Wesley Dombrecht tells us the idea behind his project Reminisce had been on his mind for some time, however it wasn’t until the lockdown that it started to take shape. ‘I was looking in an old photo book and I got an impulsive idea to also use old kitchen appliances that I had found at my grandmother’s barn,’ he tells us.

This picture of vanilla pudding is one image from his series of six, and came highly commended in the Fujifilm Award for Innovation category. Wesley prefers to work in the studio setting and for this set-up used his Nikon D800 with a Nikon 85mm manual tilt-shift lens and Profoto lighting.

‘I like to have the same lighting consistency in my images, so for that a lot of tests are done in advance. I have a fixed routine in making this type of image. I always photograph the different elements of the image, and I often work with stackings that I later combine in Photoshop.’

Manja says, ‘“Styling” the octopus was a fiddly, time-consuming and slimy task. In food photography, an octopus is usually presented inside out to expose the suction cups on the arms. I wanted to get this guy looking a bit more like a monstrous beast, pushing the boundaries of the camera frame.

I wanted to honour the importance of this creature and get it looking the part it plays in the Maori legend of Te Wheke-a-Muturangi. In this story, the famous explorer Kupe battles with a monstrous wheke (octopus) across the Pacific Ocean and this leads him to discover Aotearoa.’

Manja finishes by saying, ‘My goal is always to create images that are beautiful in their detail and that serve as pockets of beauty and order amid the chaos of everyday life, and creates a safe space for reflection and connection.’

It’s all a trick!

For the Pink Lady  Apple a Day category, Anastasija Malinovska’s action image, ‘Magic Birds’ took second place. Anastasija tells AP, ‘When I’m taking images, I always try to use a tripod to fix my camera for a better image quality, and I’m also tethering my camera and smartphone to the Camera Connect app (for Canon users only, but other manufacturers also offer similar functionality).

This helps me control everything remotely without having to be in front of the camera.’ Despite the fact that it looks like the toffee apples are falling through the air, Anastasija reveals this isn’t actually the case. ‘Most of my levitating images rarely actually involve objects flying in the air… if ever!

And to achieve the best image quality and sharpness, levitating objects need to be fixed/fastened in some way. For this particular image I used a helping hand, which was a table clip tool.’

When the little child feels thirsty she has to search for drinks from empty bottles. I used a Nikon DSLR to take this photograph.’ Mahabub Hossain’s important yet saddening photograph got several awards including the Pink Lady Food Photographer of the Year 2021, and we can see why.

What he reveals in one image raises important questions about our basic human rights to resources such as clean drinking water and what happens to those who are vulnerable when these are denied.

Be in the right place

Photographer Oscar Oliveras (follow him on Instagram @wineographic, or www.wineographic.com) took overall first place in the Errazuriz Wine Photographer of the Year 2021 category with his image ‘A Grape View’. ‘One of the most exciting days for a winemaker is the first day of harvest and to taste the first juice of the year,’ Oscar tells us.

‘The image was taken in Chateau des Ganfards, France, where I have worked as winemaker and viticulturist since 2018. On the 26th of August, 2020, we decided to start picking our first grapes for our white wines,’ he continues.

‘It was a chilly morning, and at 7am I prepared the press for the receival of the fruit.’ It was after this point Oscar grabbed his camera and went down to the vineyards. With the perfect sunrise setting as his backdrop, Oscar got ready for the harvest machine to unload the grapes.

‘I was lucky enough that a sharp ray of sun was illuminating the spot where the grapes were gracely falling into the trailer, with the focused look of Jean Claude Géraud driving the tractor behind.’

Always have your camera

Not many expectant mothers pack heavy camera kit in their hospital bag, however they aren’t photographer Laura Chase de Formigny (www.laurachase.com and follow on Instagram @laurachasedeformigny). ‘This shot was heavily pre-planned! I brought my Nikon D850 and my 24-70mm f/2.8 lens with me to the hospital. My husband thought I was insane for standing on the bed because of how hard the birth was on my body, but I wasn’t about to miss this shot for anything in the world.’

Laura Chase wanted a creative way to announce to her Instagram followers the birth of her baby daughter. ‘I know people follow me for food, not babies, so I had to think of a way to keep it on topic. I think my favourite part of the shot is actually the breast pump on the right, just peeking in. That’s what made it feel like it really was a photo of food for the whole family.’

Laura Chase’s image came Highly Commended in the Food for the Family category.

It’s all about style (and collaboration)

When it comes to food looking its finest, a food stylist knows a thing or two about how to make this possible. Martin Grünewald (foodstyling-gruenewald.de and follow on Instagram @lilalewisia) is a food stylist from Germany, and took first place in the Food Stylist Award.

The image pictured here called ‘Winteropulenz’ goes with five other images to showcase his skills as a stylist. He tells AP, ‘This picture is a collaboration, between the photographer Frank Weinert and myself, and shows a broad range of winter harvest in a contemporary, and organic way.’

For this image Martin ensured that each object was carefully selected and placed, but not ‘styled’ in a technical way. ‘In pictures like these, food styling is about creating an image from imagination, not on demand, so we have to have a very playful and spontaneous attitude in composing. Sometimes you throw in objects and they fit so they stay. The books (centre) are a great stand for some veggies but they also serve as a tongue-in-cheek reference to old masters.’

Food on the go

‘In the northern mountainous regions of Vietnam, one of the best cultural features is the weekly market,’ photographer Thong Nguyen (thongnguyengallery.com) tells us. ‘The market at the commune or district centre, is a place for cultural and culinary exchanges of many different ethnic groups.’

Thong’s image, ‘Breakfast at the Weekly’, saw him win first place in the Food at the Table category. It shows people enjoying Pho (beef or chicken noodle) for breakfast.

‘I captured the photo on an early spring morning,’ he says. ‘The weather was cold but sunny. As I walked around the market and the Pho restaurant, people were enjoying noodles while the sunlight caught the steam from hot bowls.’

‘Although I’ve been on the advisory panel and helped with the shortlisting for a few years, this was the first time that I’ve been on the main judging panel and it was great to be involved in making the final selection. The standard seems to go up every year and there were lots of great images to choose from.

However, I was immediately drawn to Huaifeng Li’s winning image. Initially it was the atmospheric light that attracted me but I love the interaction between the child and her mother. It’s a joyous image of one of the smaller moments in life that we can all identify with. I also particularly like Marina Spironetti’s image which won The Claire Aho Award for Women Photographers.

The colours all work well together and I love the powerful, confident stance and expression of the subject.’