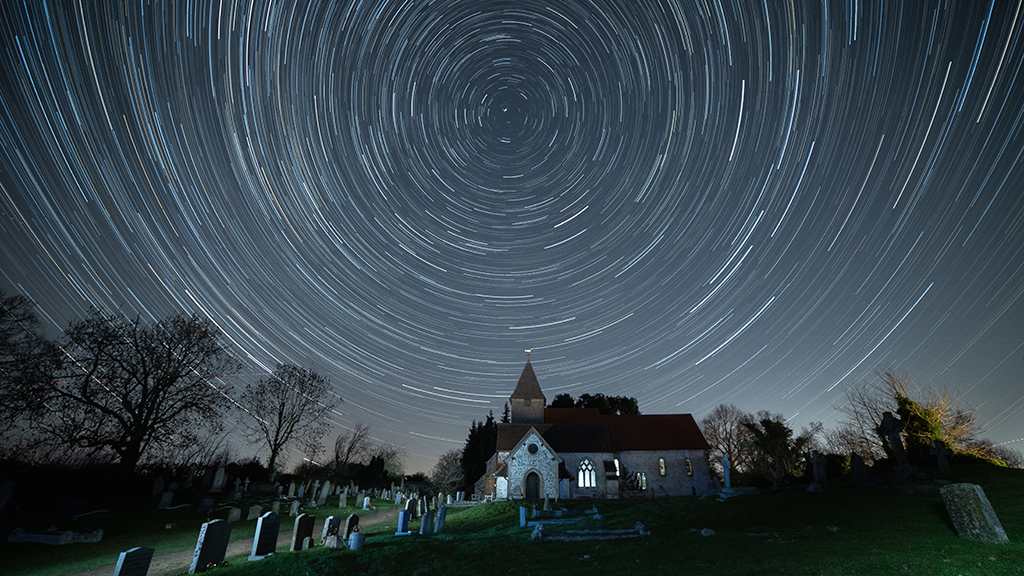 Duncan works in the IT industry and has always been a keen amateur photographer since he received his first camera on his 21st birthday a good few years ago. He finds photography fits with the lifestyle he enjoys – walking, travel and nature. See more at Photoliser.com. Duncan has dedicated this feature to his dad, Gordon Wallace, who sadly passed away last year. It was Gordon who encouraged and developed Duncan’s interest in photography.

This Silchester Star Trails photo took a lot of planning and waiting for the perfect, clear, moon-free night as I needed at least two hours to take all 162 photos that make up the final image, some of which were light painted (paths and church windows) by using selective light painting. The photos were then stacked to create the final scene.

During lockdown I practised this technique in my own back garden. This image was created by stacking 350 images taken at 30sec/photo, f/2.8, ISO 800

The first and most important thing I had to decide on was a location. At the time Christmas was coming up and the idea was to create an image of the church spire with Polaris aligned as close as possible to the spire and then capture the rotating star trails with as much colour as possible. I walk around Silchester nearly every day with my dog, Bob, and had walked through the churchyard many times.

As my main goal was the alignment of Polaris with the top of the church spire’s weathervane ‘golden fish’, the first thing I had to know was the location of Polaris. Luckily, these days you can find apps for your phone to help with almost anything. The one I use on my iPhone is called Night Sky. Using this app, you can enter a star name in the search bar, select it from the results and then select ‘Directions always above horizon’.

One of my first attempts at star trails while on holiday. One of the things I learned here was to ensure I captured enough images to create the complete star trails

Then simply move the phone and follow the arrow on the screen until the app shows the location of the star in the sky, in my case Polaris. This will pretty much be the same position day or night at any time during the year. Once I knew the location of Polaris, I had to find a good spot to set up my camera, one that gave me both a good view of the church and the open sky.

I took a few test shots and from these, I got a rough idea of the best location. Waiting for the right conditions Deciding when to spend an evening out taking the photos is probably the hardest piece of the process as weather conditions and moon visibility change every day.

Finding the right conditions can take days, weeks or even months. To help plan an evening window of opportunity, another app I used is Clear Outside. This helped me see in advance which nights and times the sky might be clear enough to venture out. Another thing I needed to know was how bright the moon might be.

For star trails the best time is when there is a new moon, because you need to avoid a full or bright moon. For this I use the Photopills app, which is one of the best free apps I’ve found for astrophotography. It also includes a virtual reality view for any given date, which is especially useful if you ever want to do Milky Way, Astro, Moon or Sun photography.

The Photopills YouTube channel is very helpful too, it has great video tutorials and documents free to download for all types of astrophotography photo shoots. Subscribers receive regular invites to PhotoPills masterclasses covering techniques, and how to plan for upcoming astronomical events.

checked Clear Outside for the weeks leading up to help find the next best clear night. Once I found what looked to be a good night, I then checked moon conditions using Photopills. I had my camera bag packed ready with all the equipment I needed as I knew I may only get one attempt.

On the night with the camera mounted, aligned, and framed I checked all the settings to make sure they were set correctly. I did a couple of test shots using different ISO settings, but generally found ISO1600 worked well. I tend to keep the ISO setting low because it captures more colour in the star trail images.

I have used ISO 800 in my garden during lockdown and with local light pollution had great success seeing much more colour than using higher ISOs. I could have taken all 162 photos like this but, after stacking, I would have just ended up with a dark outline of the church and the star trails above. To show more detail in the final photo I light painted key features and paths without overexposing or lighting unnecessarily.

How to capture star trails step by step

Decide on a location and think about the composition. It’s a good idea to visit in the daytime and determine what you want to show in the final image. Take a few test shots to help work out where to position your tripod as it won’t be as easy in the dark.

When you visit, open Nightsky on your IOS device and locate Polaris using Sky view. Sky view presents you with a real-time simulation of the sky as currently seen from your own location or other location of your choice. It is a 360° view and you can move it around by moving your device.

Set up your tripod in your chosen spot and mount the camera securely. Use an LED torch beam to help frame the image. Take the first photo using ISO-1600 as this generally creates a photo with enough light without losing the stars or church detail.

Once the camera is shooting, you can start light painting. I walked up the path with my Lume Cube slightly dimmed and was careful not to shine the light directly at the camera. This process was repeated several times to give light to different areas. Excess light can be removed in the post processing.

One advantage of using the Lume Cube over an LED torch is the ability to increase or decrease the brightness of the light. The church windows were lit by holding the Lume Cube on maximum light for 5-10 seconds at various windows on the opposite side of the church.

Post processing is where we combine the images and remove any objects or lights we don’t want in the final image as we often get satellites, plane trails, car lights, other people’s torches. There is an excellent tutorial on YouTube called Star Trails – Photoshop Tutorial by Peter Zelinka. A link to the YouTube video can also be found on the blog at my website titled ‘How to create Star Trails like these over Silchester Church’.

For my final image I hid all the layers in Photoshop and then went through one at a time. If the layer had any kind of light, I gave it an appropriate title, e.g. Church Path Lit 1. This made it much easier to identify and hide or reveal all the different layers one at a time, or in combinations, to see how they looked when they were or were not visible with the star trail layers.

Once I settled on a combination of layers to use, I hid all the layers. For the unused layers with light, I went through them one at a time and masked any areas of light painting I didn’t want in the final image. I needed to make sure the layer could still be made visible, because the stars need to remain in the scene, since without them I would have little gaps between the star trails.

To finish the post processing, I made all the layers visible and saved the final image.