How to shoot film at night – Amateur Photographer 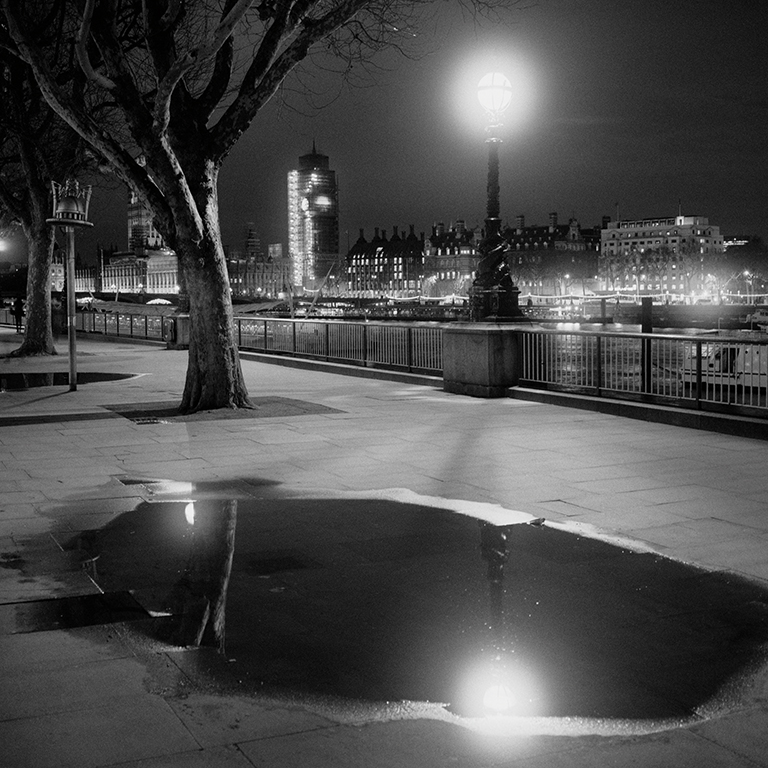 Ilford Delta 3200 can capture an excellent tonal range at night; it has a naturally grainy emulsion. With it, highlights don’t usually overdevelop compared to push processing a slower film. I also like how the highlights glow. Ilford Delta 3200 (rated at ISO 1600), developed in Ilford Microphen, 9.30min. Mamiya 6, 75mm, 1 sec at f/8

For a number of years I have been fascinated with photographing cities at night. This has resulted in an ongoing series called Nocturne, which has been shot in various locations on 35mm, concentrating on the more anonymous corners of cities. For this project I prefer to photograph with a small handheld camera, allowing greater flexibility and a more spontaneous method of working than purposefully setting out burdened with a heavy tripod.

Although I use a high ISO film –Ilford Delta 3200 – I still find myself working at its limits, often shooting at f/2 at 1/30sec. Being a fast film, it is relatively grainy which is then accentuated by lith printing on outdated Seagull Oriental paper. This process not only adds depth, texture and atmosphere to the work, but also unifies the series with the same signature style.

Why high-speed film is essential

Aside from the night photography, there are other instances when a higher film speed may be essential. Concerts and stage performances in particular benefit from faster shutter speeds to freeze the action while interior shots lit by available room lighting may require a higher-speed film to capture detail. Traditionally this is achieved by uprating films such as Ilford HP5 Plus or Kodak Tri-X from ISO 400 to 1600 or more, by underexposing and increasing development times to compensate. This is otherwise known as ‘push’ processing.

With thoughts about future projects, it was a good time to make some tests to explore and compare the differences between these two methods of working, whether to uprate or use a high-speed film. I set out for a night walk on the South Bank in London with two types of film (HP5 Plus and Delta 3200); two formats (35mm and 120); and for some of the tests, a tripod.

There is always going to be a compromise when film is uprated. With digital, the sensitivity of the camera sensor increases accordingly as the ISO is raised. But for film, there is no possibility to change its sensitivity – the only option is to lengthen development of the latent image, which provides more density and contrast as well as increasing grain.

Changing the ISO from 400 to 1600 or beyond does not make the emulsion more receptive to light; on the contrary, we underexpose the film on purpose, which can reduce shadow detail. This sounds like an anomaly, but it is done to give a stop or more exposure to enable a smaller aperture and more depth of field or a faster shutter speed so the camera can be used handheld.

It is important to process correctly when uprating film. General-purpose developers such as Ilford ID-11 and Kodak D-76 can give good results, certainly up to two stops, but I decided on Ilford Microphen for the majority of my tests. Other suitable developers include Kodak T-Max, Rollei High Speed and Acufine, which was a particular favourite with theatre photographers for decades, though is not currently available in the UK.

Microphen is formulated to raise film speed while effectively minimising the increase in grain, at least in theory; however, in practice as I would be pushing HP5 Plus three or four stops, increased grain was certainly likely. An ideal subject for push processing would be a scene with relatively low contrast and a limited tonal range. Extended development will increase the negatives’ highlights at a far greater rate than the midtones and shadows so the nearer these tones are to each other, the smoother the tonal range will be when uprated.

However, the situations when we tend to need a higher speed are often the opposite: night scenes with bright highlights and deep shadows or concerts with spotlit performers on a black stage. This can be an advantage of using a film such as Delta 3200 or Kodak T-Max P3200 (which is back in production), because the negatives usually have a softer contrast than a pushed film, making them easier to print or scan. Indeed the true speed of Delta 3200 is closer to 1600, meaning it can be advantageous to process accordingly, giving a smoother tonality.

However, while the contrast is lower, the grain is often more apparent than pushed film, so ultimately the choice will depend on the photographer’s preference. For myself, it was good to test the different possibilities and to have so many options for future work.

When examining and comparing negatives of Delta 3200 and HP5 Plus (both rated at 1600), it is easy to see the differences between the two films. With the Delta 3200, the range of tones between the strongest highlight and deepest shadow is far more gradual than in the HP5 Plus where the jump is quite apparent. In most instances, this difference in contrast can be compensated for when printing the negative by choice of paper grade or adjusting Levels or Curves in Photoshop. Delta 3200 will definitely give more grain, but that is part of its character.

Having printed both, I prefer the Delta 3200, though the HP5 Plus negatives produced an excellent print on a higher grade with selective burning and a post flash adding a slight bit of tone into the highlights.

Make sure your meter readings are balanced between the highlights and the shadows. In low light there will often be a lack of midtones to meter, so it’s best to try to find a midpoint between the two. Avoid metering only the highlights unless what is required is a low-key image.

In extreme instances, when the negative highlights are blown out and difficult to burn in, print flashing may help to bring in detail. Just a fractional exposure to light before or after printing can help to control the print’s highlights. Digitally, this technique is replicated by tweaking the highlights in Curves.

Print developer is useful if coarser grain and high contrast is required or if a film has been so underexposed that conventional developers will not produce usable negatives. Clip testing is advised. As a starting point for HP5 Plus at ISO 1600, 10 minutes in PQ Universal 1+9 works well.

When less grain is needed

For smoother results, pushing T-Grain films such as Kodak T-Max 400 should produce less grain than traditional emulsions. T-Max developer is recommended for this film (or Ilford DD-X for less contrast), combined with a gentle agitation pattern. Experiment with agitation to control film granularity.

If there are development times published by the film’s manufacturer for the developer used, it is always best to start with these. It may then be necessary to adjust times to the photographer’s preferences. If no times are available, try adding 30% per stop to standard development times.

I used to photograph a lot of bands and nearly always shot on HP5 Plus (and its predecessor HP5) or Tri-X, processing in either Ilford Microphen or Acufine. However, this shot of Ted Milton of Blurt was on Delta 3200, cropping slightly to make him more central. I had previously been out photographing in the evening so had some Delta left in my camera, and while I don’t mind the grain, given the choice I would probably have shot the concert on HP5 Plus at 1600. I think the extra contrast would have helped, and for once I would have preferred a bit less grain.

Mike is a London-based photographer and specialist printer working primarily in urban landscape and portraiture. His work has been exhibited widely in the UK and abroad. For over 20 years he has run Lighthouse Darkroom, one of the UK’s premier photographic labs. See www.mike-crawford.co.uk.

Discover the beauty of boutique film