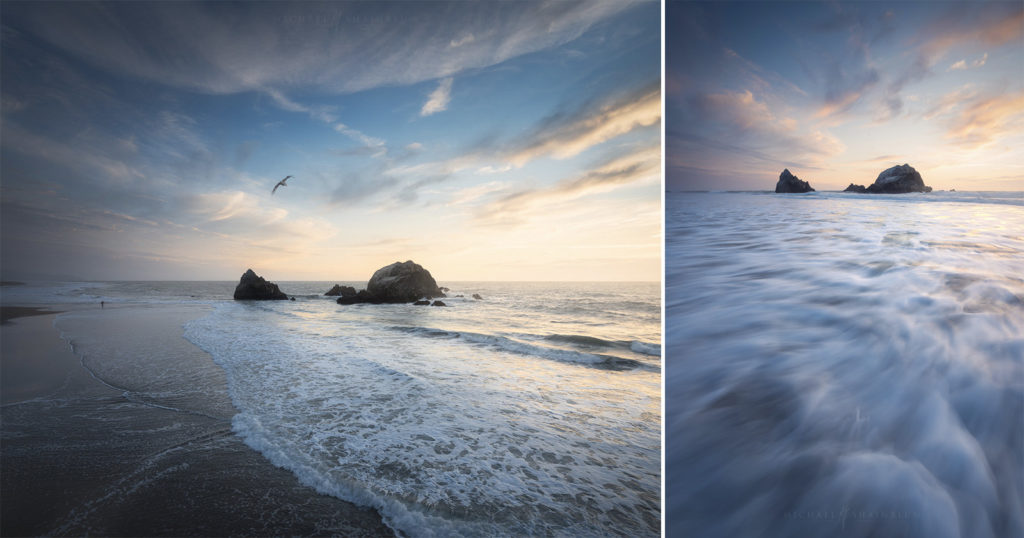 Photographer Michael Shainblum chose to capture photos with only his 16-35mm f/4 lens and shares how he composes his seascape images with such a wide angle and how he crops them for a polished finished photo.

Landscape photography that encompasses bodies of water can give photographers a wide range of opportunities in just one area. Photographers can choose to shoot detail up-close, such as rock and sand patterns, or opt for a wider composition that takes in more of the land, water, and the sky.

Shainblum wanted to explore the seaside with his wide-angle lens and has shared a behind-the-scenes first-person perspective. Although generally he carries a telephoto lens in his kit to give him the opportunity to create a variety of compositions, this time he constrained himself to just the wide-angle.

There is no right or wrong when it comes to picking out the type of lens for coastline photography, Shainblum tells PetaPixel.

“Part of it comes from instinct of what is happening around me and then another part of it is just what I feel like shooting,” he says.

A downside to picking a telephoto lens is its weight. Having to bring two cameras, multiple lenses, and two tripods for these types of shoots, Shainblum often weighs the benefits of bringing a heavy telephoto lens with him. Having said that, the decision to leave it behind has come back to bite him many times in the past.

The weight of the equipment also comes into play when photographers want to be more adventurous and explore compositions that require climbing, for example. Shainblum found a stack of rocks that gave him a good vantage point and revealed a more unique composition than simply shooting from the coast. Photographers who try similar vantage points should note that it’s important to be mindful of the tide to avoid getting stuck in high water.

Shooting with a wide-angle lens allows the inclusion of more detail in the image and gives the opportunity to later crop the photo during post-processing. In this instance, Shainblum cropped every horizontal image from 2:3 ratio to 8:10 because he felt this type of crop makes the images more impactful by removing some of the empty space on the left and right side of the image.

For vertical images — which are his favorite for seascape work — Shainblum left them as 2:3 ratio and included as much sky or foreground flow as possible. By comparison, he felt that cropping the vertical images would remove elements that are too important to the composition.

As Shainblum shares in his video above, landscape photography is not just a technical exercise — it can be an emotive and relaxing experience that allows photographers to enjoy the beauty of the landscape around them, especially as the sun lights up the sky in a variety of colors.

Image credits: All images by Michael Shainblum and used with permission.