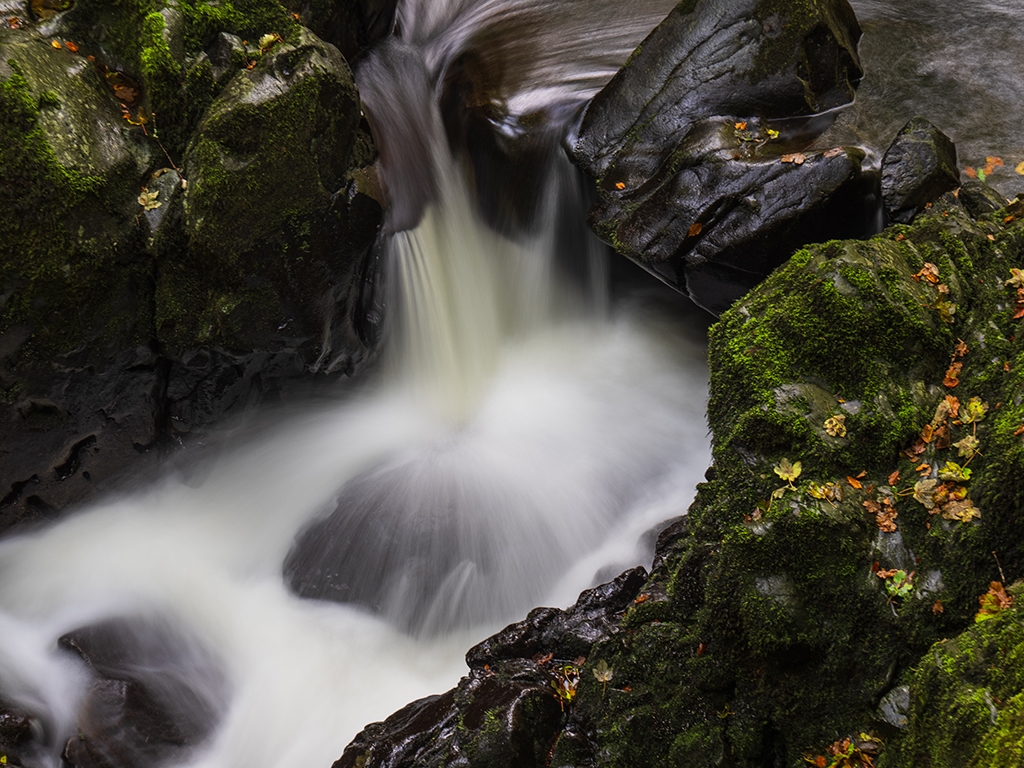 Tripods? Not always needed. Successful wildlife and landscape photographer Andrew Fusek Peters discusses why he’s become a convert to in-camera image stabilisation, and how he uses it for the best results

On one of my last shoots with a full frame camera, I climbed Caer Caradoc in South Shropshire before dawn to capture inverted mist using a heavy tripod and remote shutter release. Once I had my shots, I could see the early morning light forming beautiful patterns in some distant trees, but things were moving fast so I risked going handheld with my unstabilised body and 24-70 lens.

To keep the ISO low, I was shooting at 1/25th second and thought I had some decent shots in the bag. Needless to say, when I put them up on screen, every shot looked as if I suffered from the shakes.

Roll forward a few years, and I have invested in the Olympus system. I am standing on the Torrent path near Dolgellau (above) and focusing with my Olympus E-M1 Mk III on the water and foreground autumnal leaves. I want to see what the in-body image stabilisation (IBIS) can do and manage to crank up the settings to 1.6 seconds using the internal ND filter. The most amazing part is how I can respond to seeing something that might frame nicely and there is no faff about setting up a tripod, levelling and framing etc. A few seconds later, the shot is looking totally clean on the back screen and I walk on.

I am no expert on the whys and wherefores, but IBIS (as well as size, weight, weather sealing and fast AF) plays a key role in getting me shots that have gone on to appear in the national media and place in international competitions.

My switch to this system came at a key time, where I was struggling with the weight of my kit and middle age health stuff. The change was also important as it suited my style of photography – I like to go somewhere and then to think and act fast following my heart and my spirit with the help of my skillset. What I needed was a system that did not weigh me down or hold me back.

One of the first areas I felt IBIS could change the way I work was with landscape photography. I would definitely call myself a light-chaser, and there are two moments that always have potential for me – before dawn and after sunset as the dusk light intensifies. I have been visiting Bryn Cader Faner stone circle for some years – it is one of the most inspiring settings in North Wales.

After a long and winding drive, it’s fair walk to this remote spot, so that fact that one camera and one lens covered my needs meant my rucksack was not a hindrance. The Olympus 12-100 pro, with inbuilt IBIS is designed to complement bodies such as the EM1mk3 and give up to 7.5 stops of stabilisation. I had been using the system for a few years by this point so had some sense of its capabilities.

My goal with landscape work is to keep the ISO at base or below. This is especially important with M43. In this instance, the sunset was nothing special, but very rich colour started to appear above the Snowden range. In line with my approach, I had no tripod and no graduated filters. I was relying on exposing for the highlights and recovering the shadows in post.

My in-built histogram helped me not blow any details in either lights or blacks. I ended up with a shutter speed of 1/6 of a second at F4 and ISO 100. F4 is literally perfect as it is the full-frame equivalent of F8 so it gave me plenty of depth of field.

For this slow shutter speed, you still need good technique. The very obvious tip I would give is to tuck your left elbow into you chest as you cradle the camera, basically using your arm and body as a crude tripod, and also to breathe out and then take the shot. The IBIS is incredible but it’s no excuse for poor framing skills. My experience is that the system works best when using Olympus PRO lenses, though I am sure the in-body stabilisation would also be good with consumer grade lenses.

The other advantage to keeping the ISO low, entirely thanks to IBIS is that the Olympus Raw files yield a pleasant amount of detail and are surprisingly elastic, and this is only set to improve when their new camera with new sensor is released next year.

I have been able to shoot in near darkness and get a clean shot, which meant that as the moon rose over Barmouth Bridge, I was able to catch the deepening colours of the sky and a pleasing silhouette at 1/25sec.

Does IBIS makes a difference with telephoto lenses? Certainly in my work photographing the moon using a big reach, and because the moon rises so fast, I have never used a tripod as I often need to run like crazy to line the moon up with the foreground rocks I am working on.

Much of my moon work is based around the Stiperstones nature reserve in South Shropshire and I wanted the moon to rise behind a gap in the quartzited ridge called the Devil’s Needle. I was in phone contact with my friend who was balanced precariously on the top.

For this shot above, which is not a composite, I had to sprint a couple of hundred yards to frame him standing in the moon and IBIS gave me sharp shots at 1600mm equivalent and 1/60second with the outstanding 150-400 and 2x.

IBIS on the fly

Finally, and closer in, IBIS has enabled me to do handheld focus-stacks of a marbled white butterfly covered in dew and a comma flight sequence in my garden. I am aware that all the brands now use IBIS, but Olympus was both a pioneer of image-stabilisation and is, to my mind, still a world leader with tech that remains in the background and frees me to strive for and make beautiful photos.

Andrew is a widely published landscape and nature photographer based in Shropshire. He’s a regular contributor to AP and the national press. Check out his latest book, Hill and Dale: My Shropshire Year. See his website here.

Make the most of image stabilisation