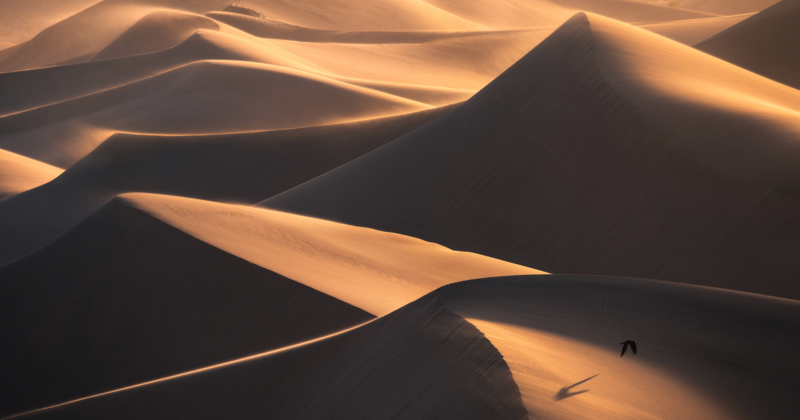 Landscape photographers dread the feeling of standing in front of an incredible scene only to look up to find blue skies filled with harsh sunlight and no clouds. On a recent photography trip to Death Valley National Park, Michael Shainblum decided to use the harsh conditions to experiment.

When Shainblum arrived in the dry California desert, he was greeted with those exact, dreaded conditions. As he points out early on in his first video highlighting the photography adventure, the cloudless skies were a far cry from the sun rays and storms he was lucky enough to get on his previous trip to the sand dunes of Death Valley.

Instead of spending his limited time wishing for better conditions, Shainblum used the opportunity to focus on using his Nikon 100-400mm to create minimalist images of the dunes that showcased the details of the ripples and the contrast between the sunlight and the shadows.

PetaPixel asked Shainblum to share his tips for capturing these incredible desert landscapes in conditions that are less than ideal.

Leave Your Expectations at the Door

“The biggest key is to lose the expectation of getting an amazing shot of the dunes and just go explore,” Shainblum says. “I know that may sound counterproductive, but it works. I went out to photograph dunes in 2011 and 2012 and I had this grand idea of these dramatically spiky dune peaks catching a warm glow with blasts of sand gusting over them. I was chasing shots like that and I never got them. I grew frustrated with dunes and kinda ruled them out. It wasn’t until I went out on the dunes, just for fun and with no expectations, that I started to see intriguing compositions. I got better images than I could have imagined. It was at that moment I started to love the art of photographing dunes.”

“From afar, when you look at sand dunes, they all look very similar. Some are taller than others, but for the most part, you can only see one composition. When you walk into the dunes, however, you begin to notice the unique shapes of each dune and the dramatic size differences from one dune to the next. With just a short walk, the composition possibilities change drastically. Keeping on the move, as challenging as that is in deep sand, can give you endless variety to your compositions.

“Using an offline maps app like Gaia can help you scout and track your route and mark interesting positions that you find lead to good compositions.”

Focus Stacking is Your Friend

“As much as you hear me say in the video that I am often too lazy to focus stack, it can be invaluable when photographing sand dunes using a telephoto lens. Even with an aperture of f/14, telephoto lenses will not capture the entire scene sharply. For those compositions that you really like, it will be worth taking two or three exposure with the focus set on different distance planes. Even if you get on your computer and find that a single image is good enough, you won’t regret having taken the other exposures just in case you needed them. It’s always better to have too much than not enough.

“If you are new to the focus stacking technique, I give you a how to tutorial on my YouTube channel.”

Look For Contrast in Highlights and Shadows

“When the sun is low in the early morning and late afternoon, sand dunes become a remarkable puzzle of light and shadows. While one dune may be well lit, the one in front may be completely engulfed in shadows, creating a stunning scene. Look for these contrast-filled compositions and observe the movement of light. In this composition of the S-Ridge of a dune, I studied the way the shadows were moving across the scene and timed my exposure to showcase the curves of the ridge as they were lit up in the beautiful afternoon light while letting the shadows gently hide the downslopes.”

“While most photographers sit out the mid-afternoon light or pack up their gear and head out as soon as the sun sets, the middle of the day and blue hour can lead to incredible images. If you take out the sky, the mid-day scenes can be very warm and show off details that wouldn’t be visible in lower light. And during blue hour, the cool light with windblown ridges gives a unique and moody feel to the otherworldly landscapes.”

Be Patient and Be Prepared For The Unexpected

“Having found a composition of the dunes with people in the distance, I set up my camera and tripod, waiting for the right wind gusts to kick up to add drama to the scene. As I waited, I noticed a bird start to circle the foreground dune, and I waited with my finger on the shutter in case the bird entered the small window of light. After just a couple of minutes, the bird dove lower and gave me a split second of opportunity to capture it in the exact spot I wanted. Having identified the shot I envisioned, I just needed to be prepared in case the bird went where I wanted. The bird did what I was hoping, and I was prepared to capture that split second in time.”

“While it can often be uncomfortable, the more wind the better. Sand storms make for amazing images by adding movement and drama to the scene. If you are worried about the camera getting beat up by the blowing wind, use a plastic camera cover and a UV filter for the lens. And sunglasses can be a valuable asset to protecting a photographer’s best friend, our eyes.”

“As beautiful as the desert is, it can be equally as deadly. When photographing sand dunes, especially into blue hour, you might find yourself far from your car as night descends. Be sure you have your exit route planned out long before this as usually there is very little artificial light in the distance to guide you. Bring a headlamp, extra batteries, food, water and make sure someone knows of your location before you head out.”

Any day on the dunes is a good day, so it’s important to not get frustrated if you are not finding a composition in the chaos. Sometimes, it’s important to step back from the viewfinder and just simply stare in awe at the remarkable nature in front of you.

The results from Shainblum’s recent cloudless expedition were impressive, as the 100-400mm lens highlights the unique shapes and details of the far-off dunes. He further dives into his process in the second video from this dune photography trip.

“Dunes are all about exploring, watching the patterns, and identifying the interesting textures,” Shainblum says. “Being observant of the way the light is shifting. Being vigilant with composition possibilities but also being very present in the moment. Dunes can be incredibly chaotic when you are out there. It’s really about simplifying them. Look around, continuously be on the move looking for new angles and compositions, and don’t stop observing what’s around you. And if you don’t want to shoot the photographs, you can just bring a piece of cardboard and sled down the dunes!”

Shainblum’s recent videos show that you don’t always need the dramatic skies and weather conditions to create interesting landscape photographs. While some locations will work better than others to experiment with a 100-400mm focal length range, the photographer and time-lapse artist proves that the sand dunes of Death Valley National Park are a great place to visit with that telephoto lens that has been collecting dust on your shelf.

“The more time you spend in dunes, the more amazed you will be with their minimalism and unique beauty. Dunes make for an interesting photography adventure, even when the weather conditions don’t live up to your expectations.”