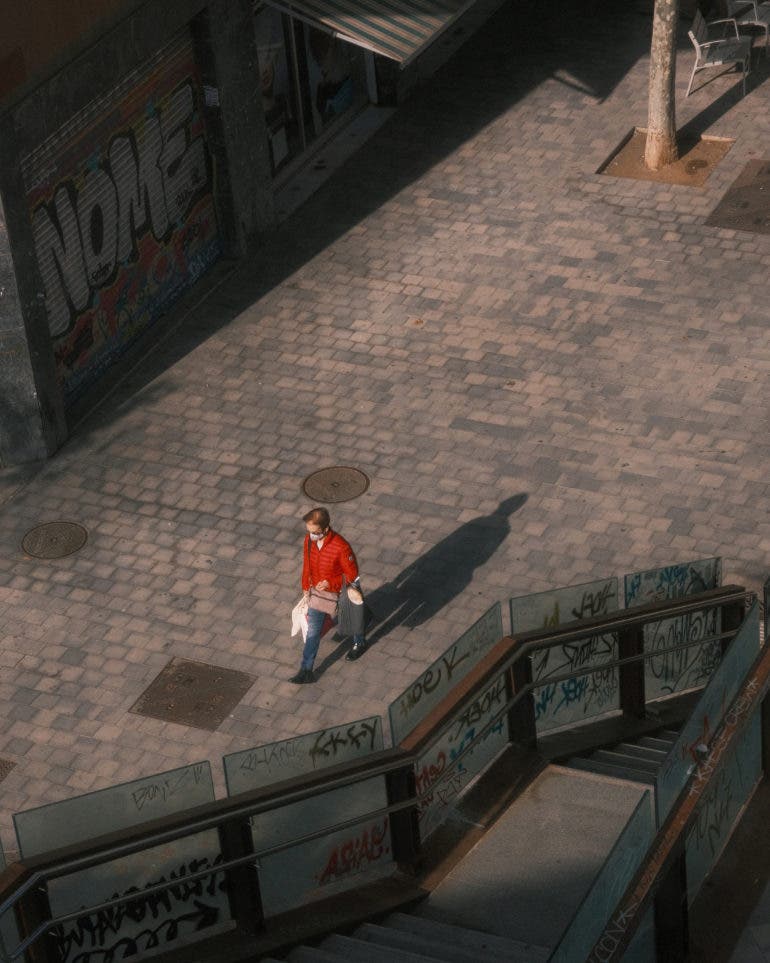 “I look for authentic body language and real emotions. I think body language says a lot without exposing people’s identities and facial features.”, says Shuko Kawase of Japan, about her street photography. Having studied arts in various cities worldwide, she is currently based in Barcelona, Spain, with her husband Nicanor Garcia (also a commercial photographer). Late last year, Fujifilm Spain contacted them to produce a visual project using their newly launched camera – the X-S10. The couple spent 3 months testing it out as a street photography camera, focusing on the IBIS and its ability to help produce shake-free images.

In addition to the visual and technical challenges that street photography poses, it also puts up ethical and personal questions when there are people in the frame. Is it right to take pictures of people from afar, without their knowledge? Is it any different if you stick a camera in their face and walk away with a photo? Even if the laws of your country allow you to photograph strangers, would you delete their images if they request you to? Smiles, frowns, poker faces, poses – I’ve received them all when I take my camera out during my travels. People around the world react differently to street photographers.

A large part of this may have to do with the laws and the cultural sensitivities of the country itself. In regions of the Middle East where I live, it is considered highly offensive and illegal to take a photograph (or video) of anyone in public without asking their permission first. In other parts of the world, photographers taking pictures of passersby and commuters is fairly common. I’ve been to many cities where strangers come up to me and ask to be photographed, many times just for the feeling of being in front of a professional camera for a moment. Whenever possible, I carry around a Fujifilm Instax SP-1 printer during photo walks around the city. Being able to immediately give a photo print to those who have pleasantly posed always brings smiles to those on both sides of the camera. Shuko has traveled to various countries around the world, and she tells us how the Fujifilm X-S10 improved the technical and emotional aspects of her street photography. Also, be sure to check out our review of the Fujifilm X-S10.

“The colors captured and rendered are glorious. Use the film sims and camera filters, and you’ll be overjoyed with the results. We’re also thrilled that the RAW files pack a ton of detail too.”

A quote from our Fujifilm XS10 review.

The Phoblographer: Tell us a bit about your background and how you got into photography

Shuko Kawase: I studied art even outside of school since I was a child, and when I was in high school, I was admitted into an arts summer school in New Jersey in the US. It was there that I got to be in a BW photography darkroom for the first time, and I just adored it.

The Phoblographer: When did Fuji express an interest in having you test out and present the X-S10, and what was the main idea behind that project?

Shuko Kawase: In November 2020, just before the X-S10 came out, Fujifilm Spain contacted me and my husband to tell us they were interested in having both of us test the camera for several weeks and present the content in our Instagram channels. The main idea was to give our audiences a first look at what the camera could do and what we thought about it.

The Phoblographer: Apart from the X-S10, what were the other lenses and accessories you used for this project?

The Phoblographer: Take us through your favourite images from this series. What ideas did you come up with before you shot them and how did you narrow down locations?

Shuko Kawase: We decided to go to Sitges for a change of pace after being stuck in Barcelona all year due to the pandemic. It was refreshing to experience a different city for a day, and I was inspired to make a short video that also included photos. Seeing my own finished video, I was overcome with emotion about how hard the pandemic had been and was for everyone… yet people were out and about… surviving. It was an emotional experience.

The Phoblographer: For the kind of street photography you do, what would you say are the three top features of the Fuji X-S10?

Shuko Kawase: The IBIS (in-body image stabilization) is a game changer for me since my previous camera, the Fujifilm X-T2, didn’t have it. The big grip is also a first for me and allows me to take more stable videos. Finally, I feel like the Dynamic Range setting is somehow better – setting it to 400, I am able to save the highlights right in the camera so that I have less work to do in post.

The Phoblographer: What were the advantages (over similar editing programs) of the Fujifilm X Raw Studio?

Shuko Kawase: The Fujifilm X Raw Studio taught me how to adjust the camera settings better. I became super interested in perfecting my own film simulation recipe based on all the great advice out there. And I really hope to edit less now when I’m traveling because I learned so much about how to finetune the settings.

The Phoblographer: As someone who’s travelled extensively, what are the major differences in the attitude towards street photographers around the world?

Shuko Kawase: I don’t know if I’ve traveled enough to answer this question well. But in many countries on opposite sides of the world, it’s necessary to really respect people because candid photos of people from a close distance are seen as an invasion of privacy.

The Phoblographer: Would you say that traditionally conservative societies, such as those in the Middle East, are opening up more towards street photographers these days?

Shuko Kawase: I’ve only been to Turkey and Qatar in the Middle East, but I didn’t have any problems shooting street photos in those two countries. It probably depends on the city – Istanbul and Doha are large cities.

The Phoblographer: How do you attempt to diffuse a situation when someone objects to your presence with a camera on the streets?

Shuko Kawase: I just move away from the situation or pretend I am actually taking photos of something other than the people who are around.

“A city that is emotional would be the best for good street photography.”

The Phoblographer: What would you say are your two favourite lenses for street photography? What is unique about these two?

Shuko Kawase: I would say the XF23mmF2 R WR and XF18-55mmF2.8-4 R LM OIS are my standard lenses for street photography. The first is awesome when it’s a bit dark outside because it brings in so much light, and the latter is great when a subject is a bit far away.

The Phoblographer: Which city tops your list of the most scenic place in the world for street photography and why?

Shuko Kawase: A city that is emotional would be the best for good street photography. I would say I haven’t been to my top choice city yet, so I wouldn’t know which one to tell you. But Paris is incredibly scenic and also has a dark undercurrent of people who are in need; this was my experience when I studied there during university. Let me answer this question in 10 years, after I’ve traveled more!

The Phoblographer: Do you think eye-catching street photos can be made with a telephoto lens too? Please explain why or why not.

Shuko Kawase: I don’t work often with a telephoto lens, but I’m hoping this will change soon because I definitely think it could catch interesting moments on the street.

The Phoblographer: What sort of emotions do you look for in the streets (to capture)?

The Phoblographer: Can an impactful street photo still be made without a human presence in the frame?

Shuko Kawase: Yes, I definitely think so. Evidence of people exists everywhere… clothes or shoes that were left behind, things of personal value that people have thrown away, a balloon that a child is holding.

“The Dynamic Range 400 setting (DR400) allows me to save the highlights in extreme contrast situations so that the whites aren’t blown out. It saves me hours in post-production…”

The Phoblographer: You like to use the Fujifilm film simulations. What helps you decide which simulation to use for a particular scene?

Shuko Kawase: CLASSIC Neg. became a favorite of mine once I experienced it for the first time in the X-S10. It has a slightly vintage feel to it, especially in the reds. But in the middle of the day, the blue of the sky can become too intense with CLASSIC Neg., so I sometimes switch to ETERNA Bleach Bypass for shots that include the sky. I then have to boost the saturation because the two film simulations are very different.

The Phoblographer: What does the Fujifilm X-S10 do for you that you wouldn’t be able to do in post-production?

Shuko Kawase: The Dynamic Range 400 setting (DR400) allows me to save the highlights in extreme contrast situations so that the whites aren’t blown out. It saves me hours in post-production. Also, the IBIS creates an already stabilized video (especially in hand-held situations) so that I don’t have to stabilize it in Adobe Premiere. It saves me a lot of time!

All images by Shuko Kawase. Used with permission. Visit her website, Tumblr and Instagram pages for more