How Rowan Renee Explores Trauma Through Their Photos 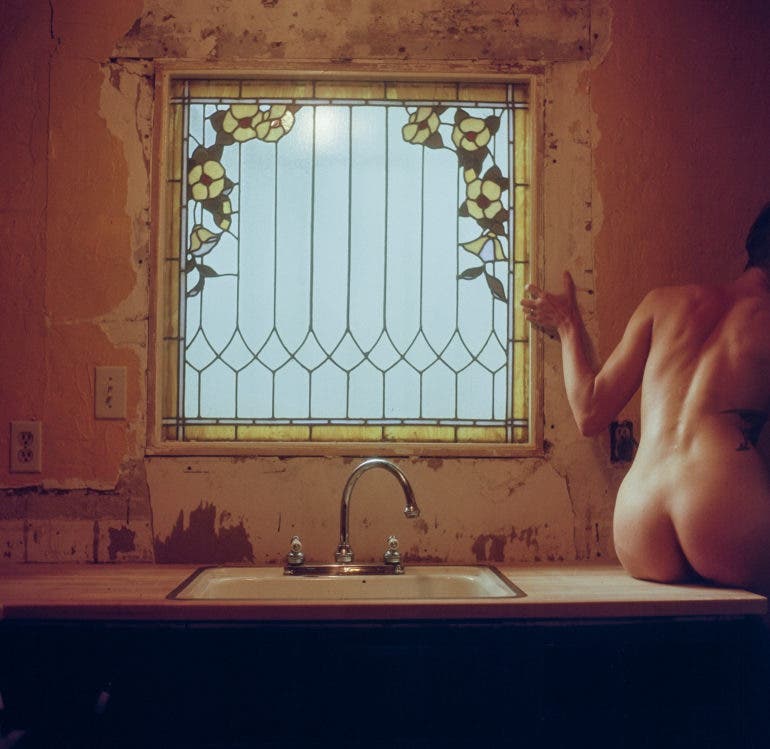 “The impulse to create Bodies of Wood came from a dream, or rather a nightmare that made it clear that the only way to heal was to talk about what happened,” says photographer Rowan Renee (they/them) to The Phoblographer in an interview. “The culture of shame and silence around any kind of abuse within the family is a powerful force, but it’s particularly strong for victims of incest.” Rowan was always fascinated by antique cameras, and so took a workshop at the Penumbra Foundation. That’s where they really started to hone their skills and eventually create Bodies of Wood.

Bodies of Wood is part of We, Women: The Power of We: a free public art show in Chicago. It showcases the work of 18 women and gender-nonconforming artists addressing social justice and political issues in a collaborative way, including immigration, education, climate change, race, motherhood and family, healthcare, religion, criminal justice reform, gentrification, sexual assault, and more. Since their assault from their younger years, Rowan’s work has focused on talking about their trauma.

To do this project, Rowan spent time on a boat, channeling the idea of “home.” The resulting images show quite a bit of expression. Rowan’s photos implore you to pour over the scene and ponder what you’re seeing. The square format lends itself well this. Some scenes in Bodies of Wood appear as if you’re getting a voyeuristic peak at their life. Other photos look like they’re conveying someone that’s been through a whole lot. And yet other images have an almost Wes Anderson sense of symmetry.

To create Bodies of Wood, I used a Yashica Mat twin lens reflex camera, basically a cheaper copy of the Rolleiflex. I got this camera for free, in my early 20s, likely at Materials for the Arts, a free store for arts organizations in Queens. I shot with this camera because it was what I had available that could shoot color film, and I knew that color would be important to this project. The Yashica enabled me to work with a remote release cable to shoot self-portraits. This meant I couldn’t actually see myself in the frame, but I developed a way of using tape markers and other objects to stand in for my own body when I needed to focus and frame the shot. This meant that I had no idea if my images came out until a week later, when I picked up the processed film. This sense of surrender to the process, and the uncertainty of whether the shoot went well, was something that amplified the sense that I was channelling something outside of myself to create these images.

I know photography often is very tech heavy, and also the gear can be prohibitively expensive for young or emerging photographers. I think an important aspect of my relationship with photography is a philosophy that you can make good images with any camera, even if it doesn’t have the fastest processor or the sharpest lens. Ultimately, I think it was the urgency and authenticity of what I needed to say that carried the images in Bodies of Wood, and I think that is something anyone can access in their own work, no matter what gear they use.

Rowan Renee: My introduction to photography began with one of the first photographic technologies. In 2010, after working since my undergraduate program as a printmaker and Street Artist, I wanted to shift gears and try something new. I took a workshop through the Penumbra Foundation on Wet Plate Collodion photography. I had always been fascinated by antique photographs that I saw in thrift stores and flea markets. I wanted to know the people and their stories. I think it was the narrative impulse that ultimately made me pursue photography more seriously. After the class, my first tintype project was a cross-country road trip where I photographed artists, farmers and activists living in intentional communities.

Phoblographer: A lot of people have trouble voicing their feelings on trauma. You’re using creativity and excelling at it. How did the your feelings as a victim of abuse become ideas for creative expression? Did you have to storyboard these images?

Rowan Renee: The impulse to create Bodies of Wood came from a dream, or rather a nightmare that made it clear that the only way to heal was to talk about what happened. The culture of shame and silence around any kind of abuse within the family is a powerful force, but it’s particularly strong for victims of incest. All of the images in Bodies of Wood were created during a 5-week residency, where I lived on a boat anchored off the San Francisco bay in Sausalito. I connected to the strangeness and beauty of the boat, as well as the California landscape around me, and also the sense of power, vulnerability and transgression of photographing myself nude in these spaces. I worked very intuitively and spent a lot of time observing the light, and also responding to the symbolism I saw in the objects or furniture that was already there, or the clothes I brought with me. Sometimes chance was really on my side, as in the image with the pink and blue flags. Occasionally I planned in advance and bought things, like red food coloring, as props to fill out a narrative I wanted to capture. Other times it was totally spontaneous, like the images taken on the beach, in the woods, or laying in the parking lot.

Phoblographer: In your description of the project, you say you’re using suggestive symbolism of home. For you, how has the idea of home changed since you did this project, and what was it like in your mind back then?

Rowan Renee: I think photographing on the boat, and in a friend’s cabin in Guerneville (the image with the red bathtub, and the stained glass over the kitchen sink) were both very unusual and surreal domestic landscapes, and that was ultimately what drew me to photograph in them. The “home” in Bodies of Wood, looks nothing like the home I grew up in. And I think that was an important thing for me and this project, there is a sense of pleasure and discovery in Bodies of Wood, that really wasn’t there in my home growing up.

Phoblographer: How do you feel you’ve evolved as a creative since then?

Rowan Renee: Even though I had a difficult home life, I also had a very supportive mother and access to privileges and opportunities, including being able to attend an arts magnet high school. This experience, and the New York trip we did in school, planted the seed of in idea that I could move away from home and be an artist in a place very different from where I grew up. I think this move laid the groundwork for pursuing a life as an artist. Being in NYC is still a source of inspiration, even though it comes with many challenges, including the high cost of living. Being so close to other artists and thinkers has allowed me to explore my practice both within and beyond photography. For example, over the past year I have started to learn kiln-fused glass, and I’m exploring how to translate photographic imagery onto fused glass works. The ability to experiment in totally new media would not have been possible without resources that make such opportunities and equipment accessible to emerging artists.

Rowan Renee (b. 1985, West Palm Beach, Florida) is a genderqueer artist currently working in Brooklyn, NY. Through craft processes – loom-weaving, analog photography and kiln-fused glass – they use the labor of making as a way to reclaim the body and enact new pathways to healing. They have been exhibited in solo exhibitions at Smack Mellon (2021), Five Myles (2021), Aperture Foundation (2017), and Pioneer Works (2015).  In 2020, their project Between the Lines, supported by We, Women Photo, ran art workshops by correspondence with LGBTQ+ people incarcerated in Florida. Their installation, No Spirit For Me (2019), was included in the critically acclaimed exhibition Marking Time: Art in the Age of Mass Incarceration, curated by Dr. Nicole R. Fleetwood at MoMA PS1.

For more from Rowan Renee, please visit their website and check out their showcase on We: Women.