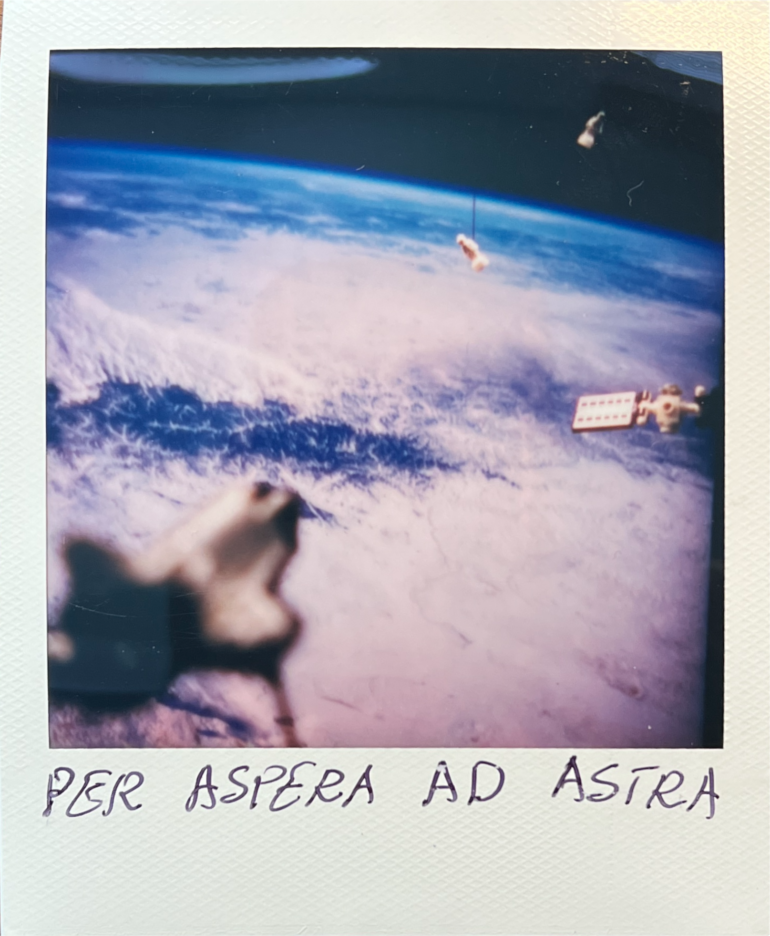 “Regardless of the high-quality camera of my iPhone 13 pro, I wasted more time taking pictures and less time reminiscing over them,” says passionate photographer Nir Patel to The Phoblographer in an interview. “My pricey solution was to purchase an SX-70 Polaroid at around 4$ a shot; I’d be forced to take only worthwhile pictures. From there, a joyful obsession began, where I’d constantly determine if the time and place I was at was perfect enough to savor through a polaroid.” Nir says he doesn’t understand basic photography principles but that shooting Polaroids gives him exactly what he wants. He chooses aesthetics over practicality and, using his beautiful vintage Polaroid SX-70, he created this unique photo of a rocket ship coming to earth. But how?

Nir explains that shooting with the SX-70 made him incredibly careful about how he shoots photos. And in turn, it’s made him shoot the same way with his iPhone. At $4 a shot, Nir tries to make each Polaroid worth it. “It’s a joyful experience that I do not need to waste much time playing around with an SX-70’s settings; I need to determine whether the moment is worth capturing and being done with it,” says Nir. “The second reason I got into the instant film is its rustic low quality. That quality makes it easier to tie up the loose ends of a fabricated scene. If the variables are correct, something like a Lego set can be turned into something realistic and phony simultaneously, which gave its attraction.”

That’s exactly how this scene was made. If you didn’t know any better, you’d think Nir created a weather balloon, shot it into space, and somehow or another photographed this scene. However, it was made using clever set design. Nir likes adjusting things on a millimeter scale and strives for perfection. He says it’s a toxic obsession. To that end, he thinks Instant Film is far more capable than folks make it out to be.

While Nir tried to make the scene look as realistic as possible using LEGOs, he also realized the flaws came out. It took multiple attempts to get the photo to his liking. In this way, he feels it gave him full creative control because he could choose his own level of realism in the shot. With that said, Nir also tried not to overthink the images. As he tells us, he was trying to make something cinematic and profound.

“I have read that the downside of SX-70 is that the film takes too long to develop and must be placed in a dark area. However, that is what allures me the most. Tossing the Polaroid away and living in the present moment…anxiously waiting for the revision of a scene builds the excitement the most.”

Nir’s final photo placed the focus on the astronaut. The background is the earth on a monitor. And in this way, the Earth was blurred enough so that the monitor’s pixels weren’t captured. It also blurs the space shuttle just enough to hide the blocks. Nir put a string on the astronaut and the kabab stick holding the space shuttle was purposely included in the picture to bring that feeling of a miniature set. “The monitor’s bezel on the right side was also purposely included to give the sense of the cameraman peering out of a window,” says Nir. “I also don’t have the professional gear to set this scene up other than my ancient camcorder tripod, which was quite sketchy to use because, at any point, it was possible that my SX-70 would have fallen.”

To light the scene, Nir used his two phones set to flashlight mode. This helped illuminate the astronaut on the right side.

All images by Nir Patel. Used with permission. You can view more of Nir’s work on his Instagram and Reddit.