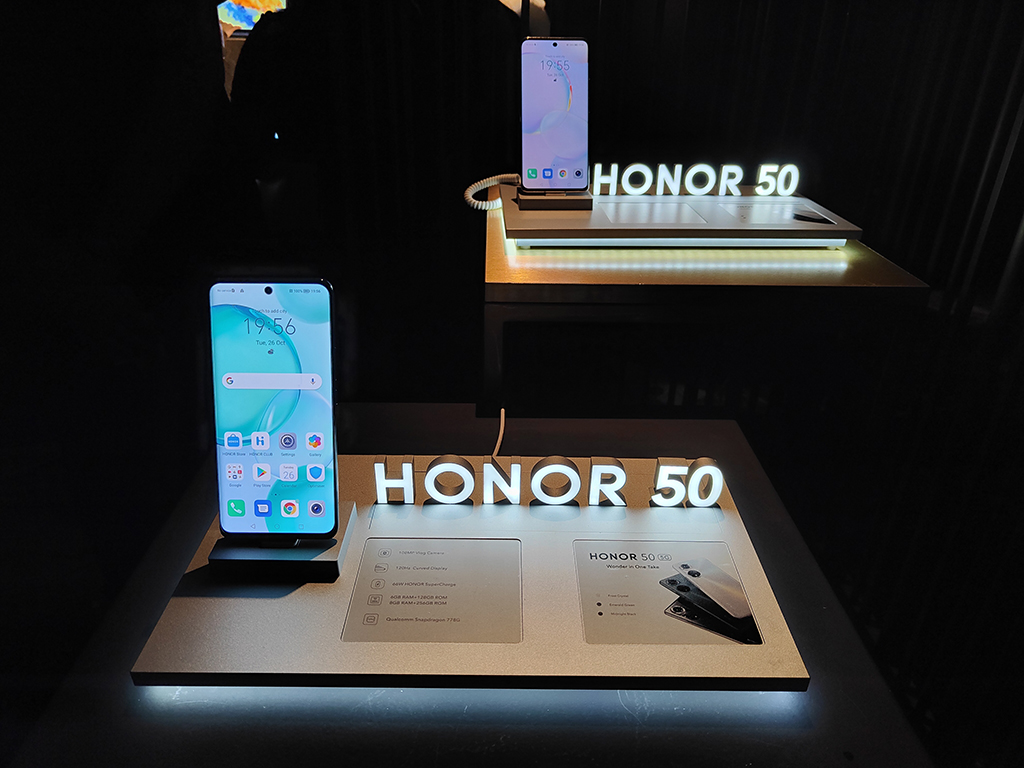 Chinese smartphone maker Honor has announced its Honor 50 smartphone, with a strong emphasis on making vlogging more straightforward. The spec sheet for stills photographers is impressive, too.

The front facing camera aims to give selfie fans more options and features a 32MP front-facing lens which is AI-enhanced to include as many or as few people in the scene as required.

There’s also a 90-degree viewing angle. You can dynamically adjust the field of vision to squeeze more people in without the need for a selfie stick. Alongside the AI wide-angle options, you also have a variety of shooting options on the front-facing camera, including night mode and soft depth of focus.

There are four back facing cameras, with the most powerful one being a 108MP main shooter for high resolution images.

Alongside that is a 2MP macro camera for close-ups, able to shoot a close as 4cm, an 8MP wide-angle lens for landscapes and other bigger vistas and a 2MP bokeh/depth of field lens for more professional-looking portrait shots with background blur.

As mentioned, the phone is particularly targeted at vloggers. A big selling point for content creators of this kind will be multi-video recording. Essentially, it can take two video feeds, alongside audio, and compress this into a single video file, while maintaining detail and clarity.

There is a single user interface where you can select from multiple modes, pause and play the video, or capture stills as you are recording. The multiple modes are as follows:

You can record with half the front facing camera and half with rear facing, so you can literally record both sides of a conversation. “When recording footage you don’t have to keep stopping and starting to record what’s in front of you and your reaction,” said the company.

This works in a similar way, but by having the smaller adjustable window, you can show your reaction to something as it happens.

Users can record with the main and wide camera and independently control them. You might be recording in a single camera mode and can easily switch to multiple dual view recording. You can also adjust the speed with which you record in real time – 1, 2, 4 or half speed. So it’s possible to get a time lapse followed by slow-motion footage.

All these features require some processing shovel, and the Honor 50 is first smartphone to feature Qualcomm’s Snapdragon 778G 5g chipset. The 6.57 inch curved OLED screen supports a Full HD+ resolution of 2340×1080 and is able produce 1.07 billion colours. The display is also capable of up to 120Hz refresh rate. Honor also claims the battery can be charged up to 70% within just 20 minutes using the included charger.

Honor began as more of a budget brand in order to differentiate from its former parent, Huawei, but is clearly aiming for a more mainstream audience with this release.

The company has some stiff competition on its hands from Apple, Samsung and other Chinese makers such as Oppo, but the Honor 50 looks an impressive handset with a lot to offer photographers and vloggers. Being able to run the full range of Android and Google applications gives it an obvious advantage over Huawei.

It also a good-looking phone that feels relatively light despite its processing power and is available in Frost Crystal, Emerald Green (our preferred option) and Midnight black.

During the launch, the HONOR 50 Lite was also announced. It is equipped with a 64MP Quad Camera, comes in Deep Sea Blue and Midnight Black, and will retail for £249.99 starting early December.

Watch out for a full review soon. The Magic 3 Pro, which has a dedicated 64MP monochrome camera and other advanced features, is to be released in the UK next year. More details to follow.