There are numerous ways to convert color images to b&w, and some work better than others depending upon the type of photo on hand. The tutorial below is designed for landscape imagery, and provides a foolproof method for achieving striking contrast-rich photographs.

This eight minute episode comes to us from German landscape pro Christian Mohrle. If you’ve followed his work you know he’s just as adept behind the computer as he is with a camera. The technique he demonstrates here can be easily accomplished with either Photoshop or Lightroom.

He begins with a pretty nice color landscape shot with interesting cloud cover and jagged mountains in the background. But after working his magic, the resulting b&w image is far more compelling.

Mohrle says, “As I’m not a fan of this midday light I wanted to make use of the harsh contrast by converting the photo into a black-and-white image.” As you’ll see, both the contrast and blue sky from the original are perfect for this particular conversion.

Everything Mohrle accomplishes is done with simple adjustments in the Camera Raw editor, and he begins with basic global adjustments involving white balance, exposure tweaks, highlight/shadow modifications, and an increase in contrast. 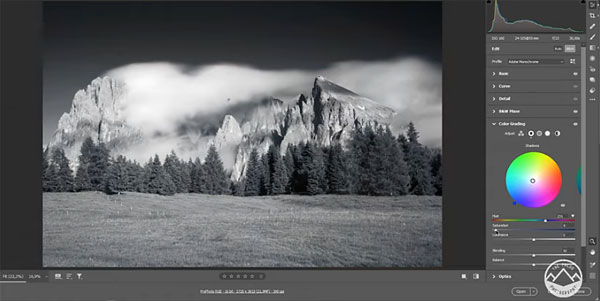 Next come the selective local adjustments, using a graduated filter over the sky with a Color Range Mask, specifically targeting the gray tones of the sky. He simply drops the exposure to make this portion of the scene darker, while dropping texture all the way down to eliminate noise.

Even though this is now a b&w image, Mohrle demonstrates how the Color Mixer panel can be used to accentuate the effect. Bringing down the blue slider, for example, further darkens the sky. He then adds a very subtle blue tone to the shadows to fix the yellowish look of the b&w image.

After watching the video, be sure to visit Mohrle’s YouTube channel where there’s a lot more to learn. And check out another tutorial we posted, explaining 10 great landscape editing techniques you don’t want to miss

New to Photoshop? These Are the 1st Tools to Learn (VIDEO)