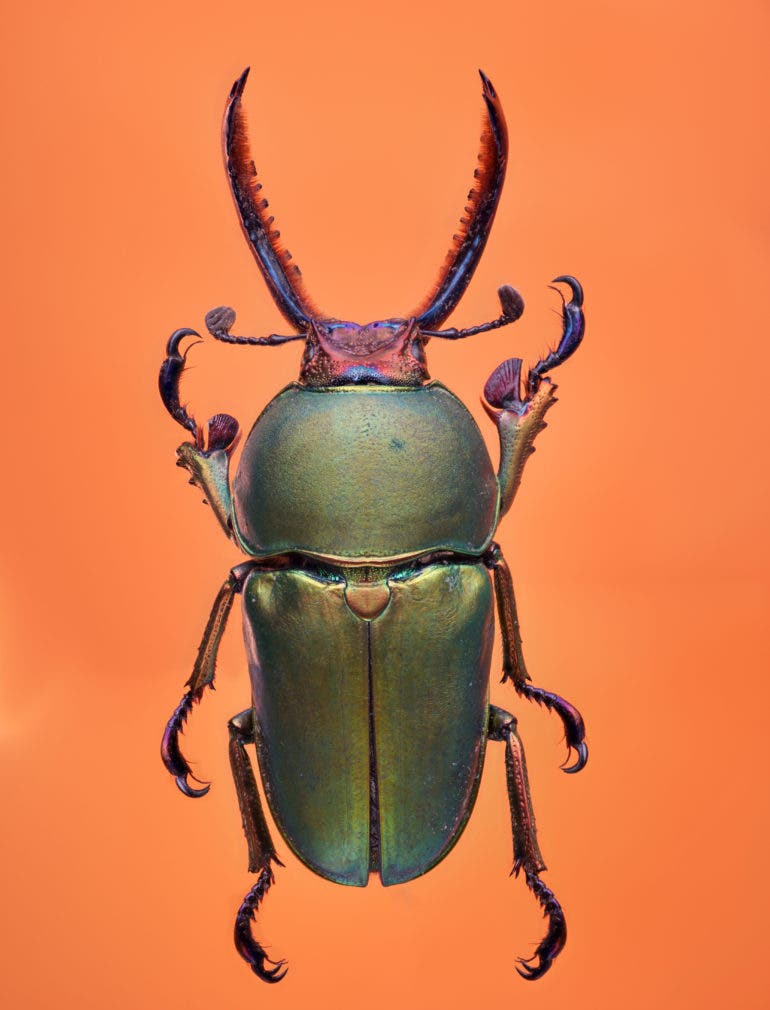 “By showing how beautiful and complex their bodies are, I think people will start to appreciate them more,” says Hasan Alhamada of Saudi Arabia. A computer programmer specializing in designing corporate brochures, he got into macro photography when unsuccessfully trying to create a flower using software. He hopes that his photography can help people better understand the role of insects in the ecosystem.

Creepy crawlies and I don’t go well together. Having to dissect insects in a lab was one of the reasons I opted out of studying biology in high school. Having to view mosquitos under a high-powered microscope in junior school probably helped steer me from insects in general. Hasan has no such qualms and visually embraces all that these insects have to offer, at magnifications so large that most of us would run away from looking at them. It’s not easy work, though. Each of these creatures is posed carefully, almost like you would with a real person. Not everyone would agree with some of the ethics practiced behind insect macro photography. But there’s no doubt photographers like Hasan help us see these tiny beings in a whole new light. Hasan was most enthusiastic when I got in touch with him for an interview about his macro work.

In this type of photography you must be a great DIY person as a lot of the equipment either doesn’t exist or is very expensive, so duct tape and the different tools is part of the daily routine for any extreme macro photographer

Hasan Alhamada: I am a programmer, a trainer, and a macro photographer. My love of photography started 23 years ago through Photoshop; I used to design brochures and advertisements with Photoshop. Then one day, I came across a photo of a flower that had a blurred background. With my ego as a designer, I tried to replicate the effect with no real success. One of my friends told me that it only happens with the lens, not with Photoshop (there was no AI at that time). From that moment, I forgot about designing, and my life became happier.

The Phoblographer: When did you decide to specialise in extreme macro photography? What was the tipping factor?

Hasan Alhamada: I love challenges, and I’ve always been fascinated with details. I need to reveal more details in my photos to show the unseen. Insects were always the underdog. By showing how beautiful and complex their bodies are, I think people will start to appreciate them more and learn more about their significant role in the ecosystem. Seeing the details of a butterfly wing under the microscope was a tipping factor for me to try to share this beauty with the public.

The Phoblographer: I’d love to see the macro rig you have. Could you take us through your work flow for any one of your favourite images.

Hasan Alhamada: The process starts after I decide which insect is next on the list. First, I need to do joint relaxation for the insect legs and antennae using a special liquid, and this step takes from 2 -6 days depending on how dry the insect is and the type of the insect. Then, bin the insect on a foam sheet in the required position and leave it for three to four more days to [set into] position. The next step is the physical cleaning to remove any dirt, especially in the eyes. After that, we had to bin and position it so we could start taking photos. In the photographing stage, it is critical to use a good diffuser. It is a must to use an electronic stacking device as every step could be as small as 5 um in the high magnification shots like the peacock feather or the butterfly wing.

After taking all the frames, I use the Affinity photo application to create a single image with all the focus points merged together. I know a lot of photographers use specialist applications for this step but for me, I think Affinity photo just does the job. The final step is cleaning the insect sample from any dirt that is left after the physical cleaning, then fixing any color and white balance issues in the photo.

The Phoblographer: Do you work with only dead insects or do you photograph live ones too?

Hasan Alhamada: For extreme macro fields, any kind of shake and/or movement is not allowed, so dealing with living insects is not on the table. I know photographers work only on the night after everybody in the house sleeps, so nobody creates a vibration by walking nearby, and others turn off the air conditioner for the same reason. Stacking with (1:1) magnification is possible for living insects, especially in the early morning or on cold days, but anything beyond 1:1 is not practical.

The Phoblographer: There have been instances of macro photographers freezing insects in order to make them immobile for their macro photography. Would you say this is more ethical than killing an insect outright for the same?

Hasan Alhamada: I do not think freezing insects is more ethical, especially if a lot of them just die in the process and it is a long, cold [route to] death. For me, I collect some of my samples already dead; you could get quite a lot in the heat waves, and I get some of them from collectors. I admit that I kill some insects, but I consider it a good reason, just like the lab rats. In my opinion, it is ethical if it is for a good cause and shows beauty; and raising awareness for insects is a good reason.

The Phoblographer: Is there a lot of focus stacking and post processing required? File storage and management must be a real headache.

Hasan Alhamada: This totally depends on the magnification level the subject needs; the bigger we go, the smaller depth of field we have, and as a result, the more photos we need to get everything in focus. The other factor is if we want to photograph the insect as one part or photograph each part alone, then use the panorama method to merge them together. As a result, I sometimes take more than a thousand frames for a single insect and sometimes 40-60 frames. Then the stacking and color editing can start.

I always have problems with storing my files. Last week I bought Cloud Storage and transferred most of my gallery there. Then I faced a connection problem, and I almost lost everything. Everything has been stable since then.

The Phoblographer: What are some of the more difficult insects to photograph. Which ones would you recommend beginners start with?

The Phoblographer: The colours, the symmetry, the minute details in each of them. Do you sometimes marvel at these creatures while you photograph them. What is the feeling like?

Sometimes you can not visualize the end result until you do the postprocessing and stacking, like the time when I saw a small larva on the moth wing or when I found a single scale on the butterfly wing. In these times, you realize that what you miss is more than what you see. Seeing the details of a beetle claw makes me wonder what could happen if the beetle was the same size as a man.

The Phoblographer: Most of the world treats insects as pests. Do you think if we saw them closer that we’d understand them more?

Hasan Alhamada: This is one of my main goals to photograph insects. They are always underestimated; everybody looks at them like pests, even if they play a significant role in the ecosystem and the food chain. Humans appreciate honey bees as pollinators but not the flies, even if the flies come second in the rank of natural pollinators. I am sure anybody who sees these little creatures enlarged will fall in love.

The Phoblographer:Do you have friends asking you why you don’t prefer more common subjects to photograph? Insects aside, what are else do you enjoy shooting up close?

Hasan Alhamada: My wife definitely has this question, a lot of my friends have it also, and one of them unfollowed me on Instagram. Besides insects, I try to do some astrophotography and small planet (360) photography.

All images by Hasan Alhamada Used with permission. Visit his Instagram and 500px pages to see more of his macro work.