Han Chen Made an Awesome Instax Back for the Mamiya RZ67 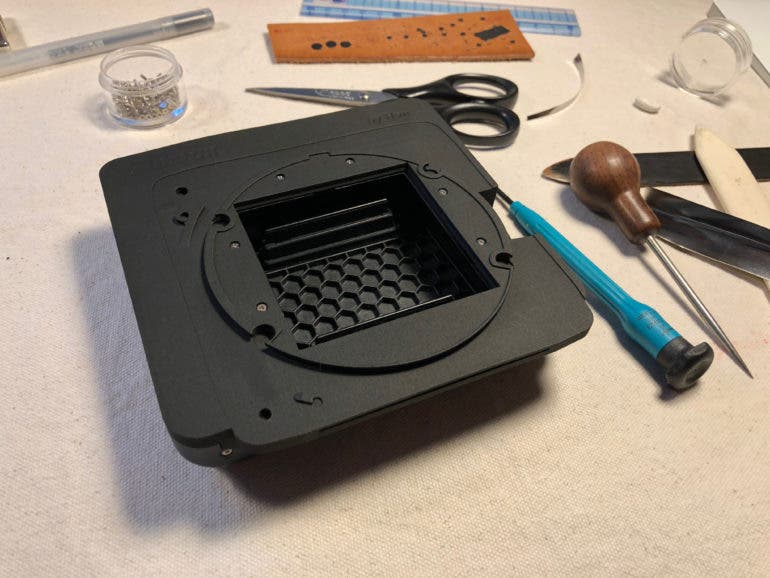 All images by Han Chen. Used with permission.

“I don’t have my own Zinstax, believe it or not. If I had a spare one, I would always send it to the next customer on the waiting list”, says Han Chen. Currently a student based in Germany, Chen’s brainchild is the aptly named Zinstax – a 3D printed back made for shooting Instax film on a Mamiya RZ67. His love for photography and making new things came together to produce this unit. In 2019 he realized the lack of such a product in the photography world, so he designed and manufactured one himself. As with almost all film photography lately, the results are uniquely unpredictable. The finishing quality of the Zinstax alone has me considering the thought of getting an RZ67 someday.

The Phoblographer: How did you come up with the name Zinstax?

Han Chen: It’s pretty simple, but there are people who still don’t get it. Zinstax = RZ+Instax.

The Phoblographer: How long did it take you to design the Zinstax? Did you have more iterations than you expected before you arrived at the final design?

Han Chen: About a year. I knew from the beginning that I won’t be able to nail it just in one go. After I slapped the mount plate I took off a 120 back on the SQ6 and realized that the focus was off, I knew there’s a long way ahead of me, and yes, there were countless iterations before the design was finalized.

The Phoblographer: There have been instant film backs for various cameras for some years now. Why did you pick the RZ67 as your model of choice for this unique project?

Han Chen: Honestly, because Willem Verbeeck shoots an RZ. When I found his channel, the Pentax 67 and the Mamiya 7 were my go-to cameras for 6×7. Although I got brainwashed by him constantly about how great the RZ system is, I didn’t make up my mind to get it because of its weight and size. Until end of 2019, when I had the idea to shoot instant films with these professional cameras, I decided that the RZ would be my final choice, because it looks gorgeous, shoots 6×7, and Willem has it

The Phoblographer: Why Instax over Polaroid? Was that a technical choice or an artistic one?

Han Chen: Instax films are way cheaper than Polaroids, that was the only reason I went with Instax. I want to just shoot away and not think about how much I’ve spent on the film

The Phoblographer: Do you think you might do something similar in future for other medium format cameras or even 35mm ones? I would love to see something like this for my Nikon FM2.

Han Chen: I will make an instax for the RB, as it seems to be the most requested one. It’s much easier to make a back for a modular camera system, because you don’t have to modify the camera itself. A back for the FM2 is probably too difficult

The Phoblographer: Have you had a sizeable demand for this from around the world? Have there been requests for instant backs for other camera models from your followers?

Han Chen: Zinstax is for sure a niche product, so I am still able to meet the demand as for now. People have asked me to make a back for RB67, Mamiya 645, Bronica SQ series, Rollei SL66 or even the monstrous Fujifilm GX680.

The Phoblographer: Is the film loading and ejecting a straightforward process with this back?

Han Chen: Yes. You load the film as you would do with any other instax cameras. Turn the crank to eject, once you get a hang of it, it’s super easy and intuitive.

The Phoblographer: What was the most unexpected challenge you faced with developing and / or using this mechanism?

Han Chen: Making the light seal, for sure. You have to make sure no light gets to your unexposed film through the dark slide slot, when the dark slide is pulled out. How would you do that? I know there is an RB instax back on the market, and its solution to this problem is to insert another short “dark slide”, essentially a plug, into the slot. Perfect, right? No, it’s hilarious. Light is still able to get in when you’ve pulled out the dark slide and haven’t inserted the plug yet. Unless you can do it faster than the speed of light, your film is toasted. You can certainly insert that plug in the dark, but I mean, come on. Zinstax has a built-in metal light seal that won’t wear out, and it’s simple, which means it’s robust and unlikely to fail.

The Phoblographer: What sort of photography do you mostly find yourself doing with this?

Han Chen: I don’t have my own Zinstax, believe it or not. If I had a spare one, I would always send it to the next customer on the waiting list. And I’ve always wanted to make my own Zinstax a little bit differently, a special one, made out of machined Aluminium or something. I haven’t got around to do that, though, and honestly it might be impossible. I have a friend who has the very first prototype I made, so I always borrow his when I want to shoot some instax with the RZ. With that said, I haven’t shot much with my own creation. When I do, I mostly shoot my friends when we’re having a good time.

The Phoblographer: Were any RZ67s sacrificed in the making or testing of this back?

Han Chen: No. I’ve taken apart a 120 back and will never be able to put it back together, though. The parts are sealed in an ikea ziplock bag and tugged away under my bed. That must be the reason why it always comes back to haunt me in my dreams.

The Phoblographer: What is the road ahead like? Do you have more products coming up for film photography enthusiasts?

Han Chen: The next project is Binstax, an instax back for the RB. I don’t know what’s after that, maybe a Zolaroid, a polaroid back for the RZ, or an instax mini back for the Mamiya 645, 5instax? I’m not even sure how you’d pronounce that sh*t. I like to shoot seemingly mundane scenes without much to it at first glance, and I like the peacefullness in them. If no one documents these, they will be gone forever

The Phoblographer: What advice do you have for today’s photographers who want to dip their toes in the world of instant film?

Han Chen: Who am I to give advice to those photographers who are way more talented than me? It’s fun, it’s cheap, come and shoot more. So fuji will keep instax alive. I still remember my heart broke when they announced 400H will be discontinued. Why do you hate us, Fuji?

All images by Han Chen. Used with permission. Head over to his Instagram account to see more of his work.