Greg Williams Photographed Zendaya with a Remote iPhone for Vogue 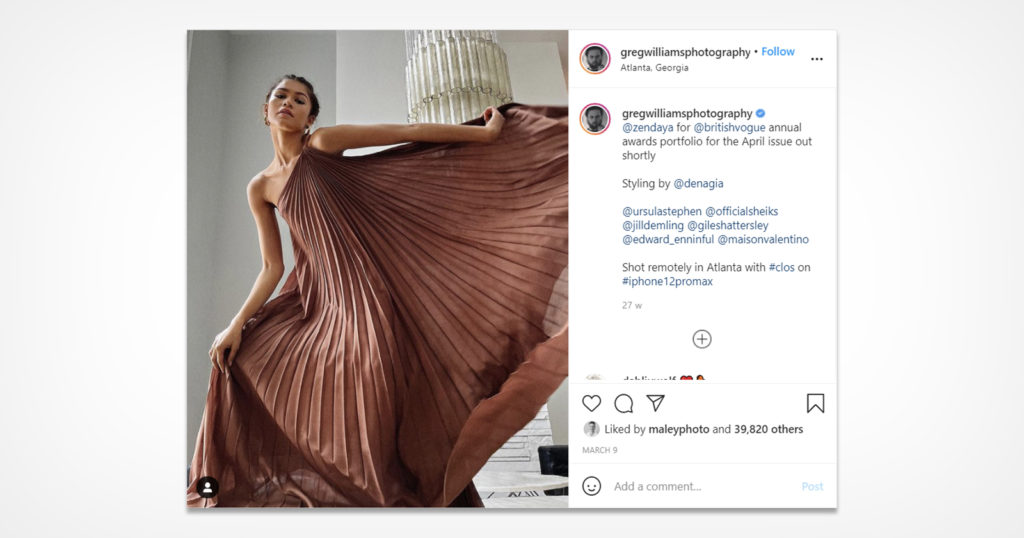 Celebrity fashion and portrait photographer Greg Williams recently photographed Zendaya for British Vogue through a virtual photoshoot. He used the virtual photo app CLOS, which allowed him to control her smartphone from the other side of the world.

Virtual or remote shoots gained popularity during the height of pandemic lockdowns when photographers found themselves forced to come up with innovative ideas to continue pursuing their hobby or profession. In March, PetaPixel shared how to do remote shoots using Zoom to capture screenshots and how to control the subject’s DSLR remotely (also via a Zoom call). Meanwhile, others, such as photographer Alessio Albi, turned to Facebook’s video call alternative — FaceTime.

Although face-to-face shoots have now resumed to a certain capacity around the world, there is still time and place for virtual shoots, Williams proves. He photographed Zendaya from the comfort of his home in England while she posed for him in Atlanta, Georgia in the USA.

In the 1-minute video above (spotted by DIYP), Williams shares how he created remote portraits of Zendaya by controlling her iPhone 12 Pro Max camera.

The final image was published as a full-page spread as part of Vogue’s 2021 Hollywood Portfolio, which also featured 27 of the world’s biggest stars like Kate Winslet, Rashida Jones, Viola Davis, Tom Holland, and others. Although the Vogue feature was published in March 2021, Williams released the behind-the-scenes video on YouTube and TikTokk only earlier this month.

As technology, and smartphone cameras, in particular, advance, remote shooting is not to be dismissed and can become a part of a modern photographer’s workflow. Apple’s recent collaboration with photographer Mark Clennon shows that powerful portraiture can be achieved with smartphones and if the resulting quality is good enough for a major fashion publication like Vogue, it’s something that other photographers can consider, too.