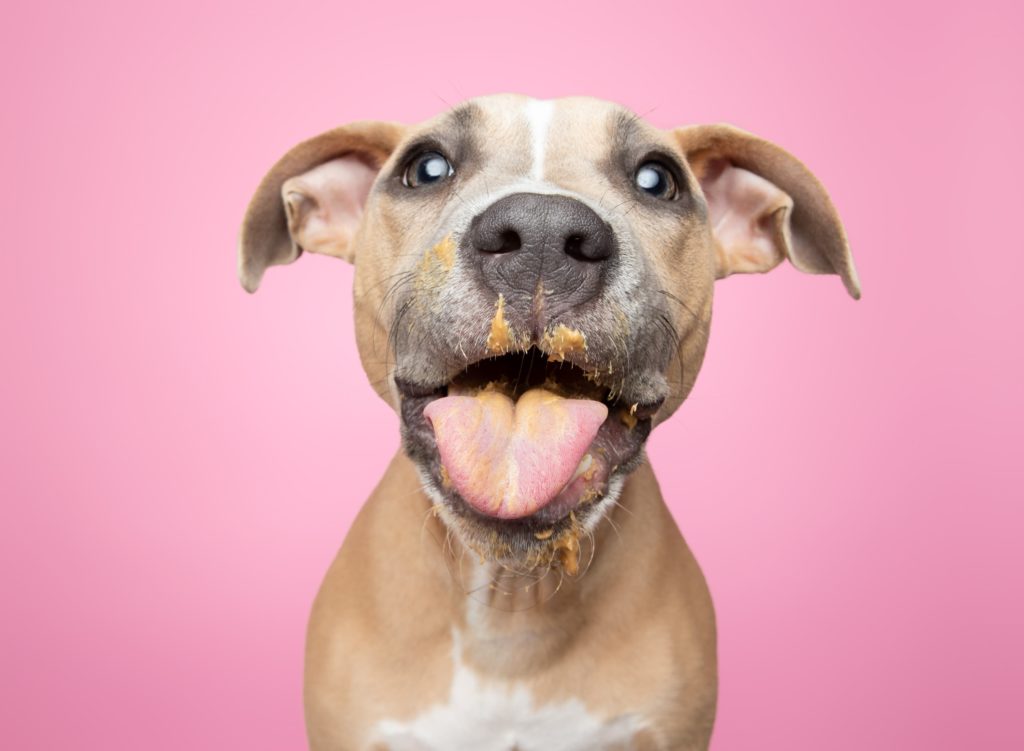 “Harley’s human is a first responder, and as you know, the past year has been challenging, especially for them,” the photographer Greg Murray remembers of a one-year-old dog who graced his studio last year. “Each time I’ve met Harley, I can see how important she is to her human. The connection they have is very evident. They both need each other so much.” Harley is one of seventy young rescue dogs featured in Murray’s new book, Peanut Butter Puppies, the exuberant follow-up to 2017’s Peanut Butter Dogs.

The book includes all kinds of dogs, each delightfully licking peanut butter. In its pages, you’ll find chihuahuas, beagles, Great Danes, Australian cattle dogs, Saint Bernards, dachshunds, Doberman Pinschers, Boston Terriers, Labradors, Bernese mountain dogs, and many, many more. But pit bulls like Harley will always occupy a unique space in Murray’s heart, in part because they’re often the most misunderstood and overlooked.

In the United States, 40% of the 1.2 million homeless dogs euthanized annually are pit bull-type dogs. They’re overbred, and they face prejudice from the public. In some areas, Breed Specific Legislation (BSL) bans ownership of pit bull-type dogs, making it impossible for people to adopt or keep these dogs. In recent years, Murray has been one of many citizens who has advocated to end these kinds of bans in Northeast Ohio. He’s also the author of Pit Bull Heroes, featuring dozens of pit bulls, from therapy dogs to narcotic-sniffing dogs, who changed their communities for the better.

Peanut Butter Puppies is a joyous tribute to each and every type of rescue dog imaginable, from the purebreds to the mutts and everyone in between, but the pit bull mixes–and their bittersweet stories of resilience and rescue–are among its brightest stars. In celebration of Harley, her first-responder, and all the ordinary dogs and people who found comfort and strength in one other amid a difficult and turbulent year, we asked Murray to tell us more about Peanut Butter Puppies.

Grab your copy of the book here, and consider making a donation or volunteering at your local rescue or shelter to help dogs in your area. You might even find a new addition to your family.

The Essential Gear of Greg Murray

Phoblographer: Tell about how you first got into photography.

Greg Murray: I loved the arts from a very early age. My mother would send me to summer art classes as a child. I came a class short from minoring in art in college. I never took a photography class, though, and am completely self-taught.

I learned how to shoot manual by pretending to be a professional concert photographer and getting pit passes to shoot shows at places like the House of Blues. The shooting conditions are so difficult. I knew that I’d learn manual quickly by photographing shows. From 2010 to 2014, photography was a hobby and side job. Then in 2014, I quit my career in HR and became a full-time photographer with the goal of working only with animals eventually.

Phoblographer: What made you want to get into photographing dogs?

Greg Murray: I grew up with animals. Some of my earliest memories are spending time with my rescue dog Muffit. We had dogs, fish, cats, lizards, birds, rats, guinea pigs, and more. I love animals. I decided in 2014 that I really wanted to combine my love for photography and animals. I knew it wouldn’t be easy but wanted to make my business animals-only within a few years of going full-time. With a lot of hard work, that happened around 2017.

Phoblographer: We know you photograph other dogs. But what fascinates you about pit bull-type dogs?

Greg Murray: I feel sad for the bad rap they get. All dogs are individuals and deserve to be treated as such. Just like for humans, we can’t judge them all based on the actions of some. When I volunteered as a photographer at a local shelter here in Cleveland, most of the dogs I photographed were pit bull-type dogs. I fell in love with them immediately. They were the most enjoyable and happy dogs to be around. They also had some difficult pasts, and that made me feel even more sorry for them.

I also live in Lakewood, Ohio, where we had a ban on pit bull-type dogs from 2008 to 2018. Along with others, I fought hard to end that ban. They don’t deserve to be treated differently based on the way they look. Cleveland is an underdog-type city, and when you grow up here, I think you are drawn to root for the underdogs.

Phoblographer: Were there many dogs (of any kind) in the book whose stories have stayed with you?

Greg Murray: I was really touched by Belle, the Cocker Spaniel rescue dog. She came from a situation where the people that breed these dogs have no regard for their health or well-being. For them, it’s all about the money. And because of that, Belle was born with no eyes. She’s a sweet dog, and I look forward to seeing her again in the near future just to hang out. I feel so sorry for her. It’s really important that we report the breeders who do things like this. It’s a big issue here in Ohio, and unfortunately, the state’s resources to stop these people are limited.

Phoblographer: Please tell us about some of the challenges of photographing puppies in a studio. How did you overcome them?

Greg Murray: The main challenge is their unpredictability. They are puppies, and not all of them are great with commands yet. They want to play! I overcome this by having low expectations and remaining patient and calm at all times. You can’t force a dog to take a photo.

Some dogs that came into the studio for the book didn’t make the book because they simply didn’t want to be photographed. And that’s okay. I knew that would happen. Many of the dogs that made the book were a challenge. But again, I remained patient. I wanted it to be a fun experience for me, the dog, and their human. If you are not a patient person, you will not be successful as an animal photographer.

Phoblographer: Do you have any funny behind-the-scenes anecdotes you can share from your time working with the puppies?

Greg Murray: All the sessions were pretty funny. Some dogs jumped off the platform into me. Many dogs just wanted to lick my face during shoots. I could often be found cleaning up after them since many were not completely bathroom trained yet!

Phoblographer: How do you get these incredible facial expressions? What camera settings work best for you?

Greg Murray: I take a lot of photos to get these expressions. Many aren’t that great, and I pick the best and funniest ones. Sometimes, I get lucky and only get a few photos that all happen to be hilarious. It just depends on the dog’s willingness to cooperate.  Most of the photos had the following settings: f/10, 1/100, ISO 100.

Phoblographer: Emotionally speaking, what was going on in your life while you were making images for this book? Do you feel it affected the creative process at all?

Greg Murray: The pandemic started a few months prior to the shoots starting in June of 2020. My wife and I also welcomed our first child into our lives in January of 2020. I think these things made me want to make an even greater book than if they didn’t happen. I wanted an amazing book for my daughter, and I wanted to improve upon my first book in the series, Peanut Butter Dogs.

I knew that the book would likely come out when the pandemic was still going on. I wanted to make something great that would bring much-needed smiles and laughter to people’s lives. In fact, Peanut Butter Puppies was supposed to be my fourth book, not third. We decided to move it up because of the pandemic because we knew it would make readers happy during an uncertain time.

Phoblographer: Last year, stay-at-home orders led to a surge in adoptions and fostering. What advice would you give to first-time dog parents wanting to photograph their pups?

Greg Murray: Get at your dog’s level, close to the ground. It’s a more natural photo, seeing your dog as other dogs would see it. Photograph your pet’s personality. Whether your dog is lazy or playful, capture it the way it spends most of the time. If it sleeps a lot, take pictures while it is sleeping. Sleeping dog photos are always great subjects.

Avoid flash at home or outdoors. Find a spot in your home with natural sunlight and avoid direct sun, which can be harsh. If shooting outdoors, try in the early morning or evening for more forgiving light. Hold a treat or toy over your phone or camera lens to get their attention. Be patient!

Phoblographer: Any peanut butter safety tips everyone should know?

Greg Murray: When it comes to safety, it’s important to make sure any peanut butter does not contain Xylitol. That can be very dangerous for dogs. Most peanut butter brands don’t use it. So it’s unlikely you’ll even find it. But just to be safe, check to make sure. Also, don’t give your dog too much peanut butter. It’s a treat. For the book, I typically only used a spoonful per dog. While peanut butter is perfectly healthy for dogs, too much may upset their stomach.