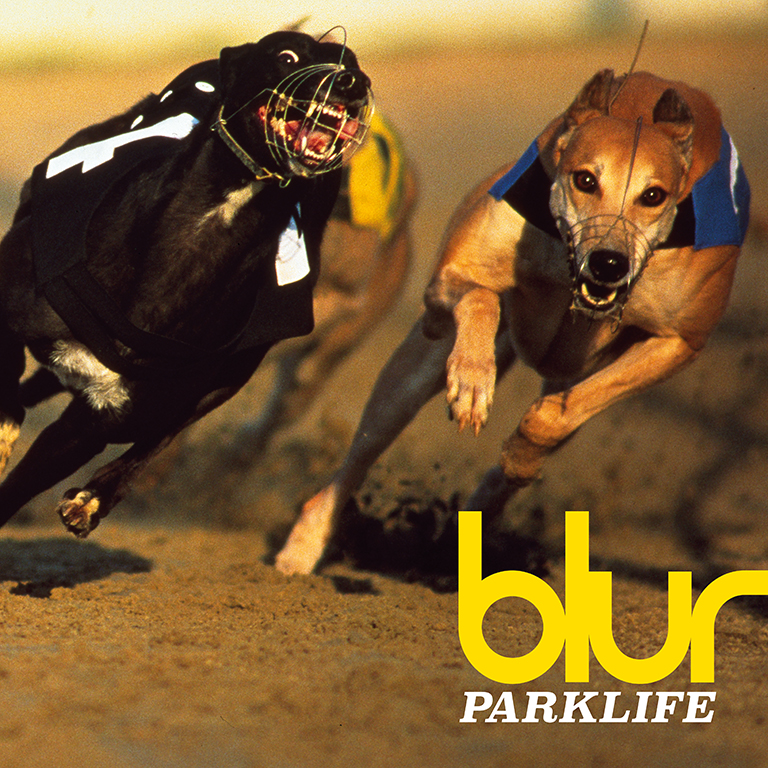 Steve Fairclough reveals the inside story of creating the iconic cover of Blur’s 1994 album, Parklife

Best chart performance: No. 1 in the UK Albums Chart Sales: Over 5,000,000 certified sales

Fascinating fact: Whilst the Bob Thomas image for the record cover was shot at Romford dog track in Essex, all the photos of the band on the record and CD packaging were shot by photographer Paul Postle at Walthamstow Stadium dog track in east London.

Walthamstow Stadium hosted its final dog race in 2008 and the site is now a housing development. The Parklife cover was among ten that featured on the GB Special Stamps ‘Classic Album Covers’ issue of January 2010.

The photographer: Bob Thomas (above)

Born in England in 1958, Bob Thomas began his career after leaving school aged 17. He gradually built up the Bob Thomas Sports Photography agency alongside photographers David Rogers and John Evans. By 1980 they were travelling 200,000 miles a year shooting some 20 sports. In 1984 Thomas was voted Sports Photographer of the Year and his image portfolio is now represented by Getty.

The cover of Blur’s seminal 1994 LP Parklife is rather an anomaly among album covers in that it relies on a ‘found image’ – a greyhound racing image by sports photographer Bob Thomas – rather than a photo shot specifically for the album.

The approach of using a found image was in keeping with Blur’s previous two albums – Leisure featured a crop of a photo by Charles Hewitt for a 1954 Picture Post feature on bathing hats; Modern Life is Rubbish featured a painting of the steam locomotive ‘Mallard’ by Paul Gribble.

The commission for designing the cover fell to the creative agency Stylorouge, which had been founded in 1981 by Rob O’Connor, who explains, ‘We were involved with Blur from the point that they were signed to Food Records on an independent deal – they were called Seymour, so it was right from the word go.

The first job we got for Blur was to design a T-shirt and that gave rise to the band logo. We designed the covers of the first four albums. That sort of design, when you’re actually using very little imagery, is a difficult concept but that’s part of the spirit of those early Blur covers. We were misappropriating advertising imagery from one field to package and market music. That was the whole mischief of the thinking.’

Stylorouge worked closely with the band and their ‘svengali’, Dave Balfe, who had founded Food Records and had played keyboards in and managed the band Teardrop Explodes. O’Connor says, ‘We started the job before we even knew it was called Parklife.

With the theme being London, we suggested a very scatterbomb, but subjective, view of London by having three of us go out with cameras on the same weekend. Chris [Thomson] from the studio, myself and Rick Mann, a very gritty photographer, went out that weekend and came back with all these photographs. We took them into the recording studio and had a lunch meeting with the band where they pored over them.’

A call from Blur’s lead singer, Damon Albarn, was pivotal, as O’Connor explains: ‘We suddenly got a call from Damon saying “can we have our next meeting in the King’s Road? There’s a branch of William Hill betting office and we could meet there?”’

Coincidentally, O’Connor and Albarn were both reading the Martin Amis novel London Fields, which tells the story of a middle-class man who decides to live a more salt-of-the-earth lifestyle. O’Connor reveals, ‘We were the first people in the betting office that day. We were in there, taking Polaroids and picking up betting slips and things. Damon particularly liked that idea of how the working man is tempted to spend his time and his money.’

The next stage was for Stylorouge to take the ideas of sport, leisure, gambling and drinking and distil them down into a visually striking record cover. O’Connor explains, ‘Our idea was to create a William Hill-style betting office front window, which always seemed to date really fast.

I remember pictures of [footballer] Alan Shearer with a full head of hair and football shirts with old sponsors on them… after a year they’re so old hat. I found that quite charming. We did a visual with about ten pictures and it got distilled down and down until it had that one image of the greyhounds, which had that kind of manic energy about it.’

He adds, ‘By this time we’d set a precedent for utilising found imagery, but that wasn’t typical of what we did. Stylorouge prided ourselves on the creation of imagery, so this was kind of biting our tongues, but we were thinking of Blur as a product, rather than a band, in an ironic kind of way. They, equally, were ironic.

O’Connor and his colleagues approached picture libraries looking for the sort of imagery that featured in betting shop windows, before choosing the Bob Thomas greyhound racing photograph – originally shot at Romford, Essex, in 1988 – which they cropped.

O’Connor says, ‘There were three dogs in the original image, so it’s a little bit wider. This was the most powerful greyhound picture. It was in our montage of a whole shop window and choosing that picture set the theme for the whole thing – all the graphics became related to dog racing and gambling, so you had betting slips and things as part of the whole marketing story visually.’

O’Connor recalls that there were no colour adjustments. ‘In those days we would have normally made a 10x8in transparency. This would give us the opportunity to retouch as necessary. This album is from 1994 – we had computers then but we really only used computers for our equivalent of DTP, literally just using Quark XPress, laying things out. We would nearly always have done our image manipulation on transparency.’

Reflecting on any potential impact the Parklife cover might have had on sales success, O’Connor remains modest. ‘Blur were ready to be huge. I don’t think anyone has ever produced a record cover that’s been more important than the record.

The thing about this cover is it’s under-designed. It’s more about attitude than anything, but the fact that it’s been on a stamp and in so many awards… I can’t knock it. The strange thing is I never met Bob Thomas and I don’t know anything more about him. But there’s no science to using a found image – it’s just about misappropriation, hoping that it works and that people understand the irony and don’t take everything too seriously.’

Our expert panel on Parklife

As someone who shoots live music, the art of capturing a fleeting moment is fundamental. I’ve always loved this cover, as the composition and timing are perfect, with very intense and expressive looks from both dogs! For me, this cover always had to be in the Greatest Album Covers list.

I loved that the cover made it feel like you were in on a joke. If you’d grown up in Britain you were familiar with the photo as it was in betting shops across the UK. Its use had this instant feeling of ‘knowing’ it was a clever repurposing of British iconography. It contextualised the album as being from that perspective.

This cover is a British icon if ever there was one. The eye contact between the dogs and us feels quite aggressive and there’s a very masculine urgency to the image – redolent of the lad and ladette culture of the glorious mid-’90s. It was perfectly of its time and perfectly synergistic with the songs.

Our panel of judges…

Some of the finest names in music and photography chose the series’ covers:

Houses of the Holy by Led Zeppelin

Born to Run by Bruce Springsteen