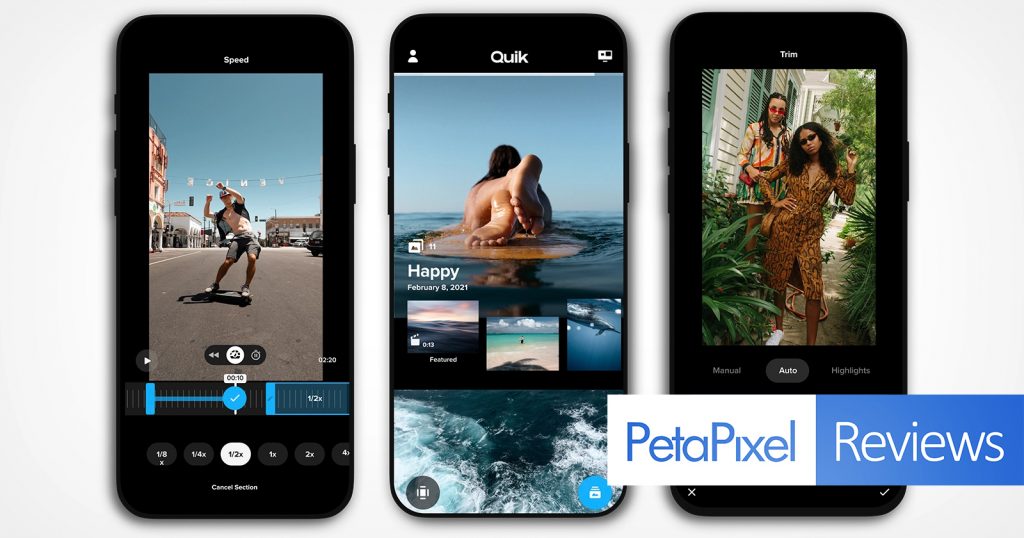 GoPro recently announced the Quik app, a relaunch of the GoPro app that makes it quick (get it?) and easy to get the most out of your favorite photos and videos no matter what phone or camera you’re using.

At its core, Quik says that it solves the “black hole” problem that most of us have with the storage on all of our devices. What does it mean by that? Well, just think about how many photos, videos, memes, and whatnot you have saved on your phone, either in the camera roll, app folders, or synced from your desktops in a portfolio/album setup. This rebooted app from the company will take these images and videos you’ve got tucked away on your smartphone and ensures you’ll never lose track of them again.

Quik replaces the GoPro app in iOS and Android app stores and existing GoPro app users will see their app update upon install. For GoPro camera users, Quik features all of the capabilities of the previous GoPro app, plus so much more. Existing users’ photos and videos will transfer from the old GoPro app to the new Quik app upon install and any cloud-based footage will remain accessible.

Quik also features a suite of powerful, yet simple, editing tools if you prefer to edit your photos and videos yourself.

Quik supports content captured on GoPros but now also stretches to include images and video taken on any camera. For more details on that, make sure to read PetaPixel’s full coverage here.

How Does It Work?

The app is surprisingly easy to use. Let’s assume you’ve already got a ton of images and videos loaded up on your phone and maybe you’ve even already been using the previous version(s) of the GoPro app. When you open Quik up for the first time, you’ll be dropped right into the Mural feed. This is the core of the new app and one of its most important features. You’ll organize, store, and use the images, and videos found here to create new videos to share wherever you please.

This makes it easier to find the content you want instead of having to scroll through your camera roll searching for that one shot you know you want in the project.

There are two main ways to populate Mural:​

First, you can send content to Quik from anywhere on your phone by using share sheets on iOS and Android.

The second method allows you to send content directly from the in-app Quik media gallery.

Your media gallery consists of four content locations: App, Cloud, Phone, or Edits. You can use any of these four locations to populate your Mural.

Unfortunately, it’s not all positive with this process. In its current state, there is no way to just import existing folders from your phone into the app and instead, you have to go into your existing folders and select the files you want and send them to Quik manually. It’s a pain point for sure, but not insurmountable.

From there, they are sorted the way you want: first as an event, and then by date. The app imports the images in an order of its own choice which you can change afterward.

At that point, you can select the photo or video you want from your media and tap the pencil icon to start editing the colors, lighting, trimming the video, adding stickers, change the video speed, and even apply custom filters/presets to each piece or the project as a whole.

Then you can select a premium theme and/or original music to play over your project. This includes 13 video edit themes and over 190 music tracks (18 of which are royalty-free GoPro Originals).

At this point, things get even more interesting. Say you’ve never worked with an app like this before, or have never put together your own videos for any sort of showreel or promotion; The Quik app can do it all for you, including selecting music and filters for you from what the app feels best suits the project you’ve put together.

I tried this with a bunch of random photos and videos I had on my phone of my dog (mostly puppy photos and some light tests of my new living room setup), and the Quik app assembled an emotive reel of these images and videos put together in an adorable “Sarah McLachlan” style commercial. I sort of did it as a quick and rather thoughtless test and was still quite impressed with how this thing pulled it all together. It even matched some of the motion in the videos to the beats of the automatically selected music tracks. What’s even cooler is that I didn’t like that song the app originally chose, so I manually selected something more upbeat, and the app automatically changed the transitions and timing to match the song better.

Here’s a two-minute clip the app put together from a selection of photos I’ve taken at various Comic Cons around the country over the last few years.

As you can see, the end result was pretty fun, although it does have a few alignment/framing issues where the portrait images are cut off on the top/bottom (this is a part that seems to be lacking in the Quik’s detection of faces in the shots), but you can remedy this manually by going into the video timeline and moving/changing the crop of the shot.

When it comes down to it, Quik does a great job fulfilling what it promised. It’s easy, it’s fun, and it’s Quik (the puns continue to amuse). While it’s a rather simple-to-use editor, it has a lot of powerful features tucked away and as a result can definitely help you create some pretty nice content regardless of the intended platform. I’d imagine the only real limitation is the end product resolution, which at least seems to export at 1440p, but without 4K it isn’t particularly impressive. That said, the content is intended to be seen on mobile devices and it should be just fine for that.

These features are all built in addition to the promise of unlimited cloud storage for any photo and video at original resolution, which by itself is arguably worth what Quik charges. One final downside is that there doesn’t appear to be a way to manage stored content from anywhere other than the app, which is a bummer; a desktop app or web-app would be a welcome addition. That said, this limitation might be why GoPro is able to offer unlimited storage for such a low price.

Oh, and the ability to control a GoPro is still part of Quik and you don’t have to pay anything at all to keep that functionality.

There are a wide variety of cloud storage and video editing apps available for your smartphones out there including some powerful tools from Adobe and some that even have some similar features to the new Quik app. However, from what we’ve been able to find, Quik has a relatively unique proposition as few can match the price of the service or the combination of features.

Should You Buy it?

Honestly, If you’re someone who wants to take advantage of your stories/Instagram/social media feeds, Quik is completely worth it. For just $2 a month or $10 a year, you get unlimited storage with GoPro’s cloud service that you can keep adding to and editing videos and reels from for your various social media channels. If you’re already paying for GoPro’s $50 a year subscription service, congrats: everything Quik offers is included.

Editor’s note: At the time of publication, GoPro had not yet launched the unlimited “original quality” photo and video backup feature. Comments made about the value of the service are done from the expectation that this cloud service launches without issue.