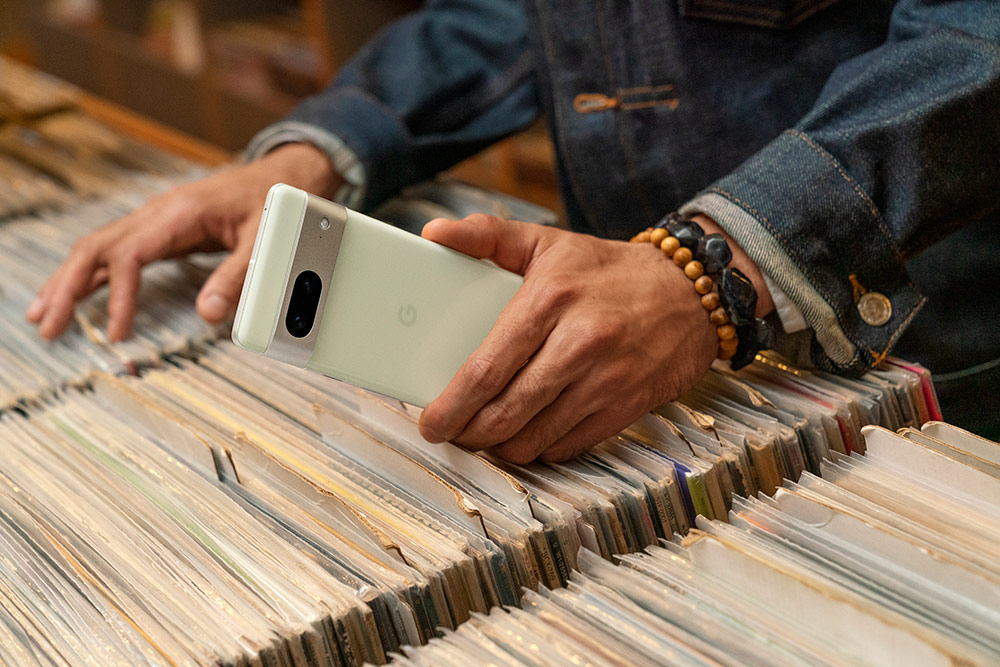 In a globally broadcast launch event, Google has today announced its latest smartphones, the Google Pixel 7 and Pixel 7 Pro. Shipping with Android 13, the new phones are powered by the latest Tensor G2 processing chip, and feature upgraded camera tech for content creators.

These are the only two phones coming out – there’s no updated version of the slim and affordable Google Pixel 6a. However, the Google Pixel 7 has been slimmed down to compensate, and is actually more compact than the Pixel 6. It has a 6.3-inch screen and slimmer bezels, while the higher-end Pixel 7 Pro sports a 6.7-inch display.

The Google Pixel 7 and Pixel 7 Pro are photographed alongside the Pixel 6a, suggesting that phone still has a place in the line-up.

Both phones are constructed from recycled aluminium, and come sporting the latest security features like Face Unlock. At its announcement event, Google also promised that the phones will be receiving regular ‘Pixel Feature Drops’, which are update packages designed to give Pixel 7 and Pixel 7 Pro access to the latest developed features. Battery life has been improved to, with the phones rated to last 24 hours per charge in normal usage, and up to 72 hours in the battery saver mode.

Google is also promising that these new phones have even better camera capabilities than previous Pixel models. So, let’s dig into what’s new for photo and video shooters.

We’ll take these one at a time. The Google Pixel 7 uses a double rear camera array, with a 50MP Octa PD Quad Bayer wide camera module, with an f/1.85 aperture and an 82° field of view. It’s this module that powers one of the new modes Google is pushing front and centre – Super Res Zoom. This gives you up to an 8x digital zoom effect that Google says achieves optical quality comparable to a telephoto zoom lens mounted on a DSLR or mirrorless camera.

The Pixel 7 also uses a 12 MP ultrawide camera module with an f/2.2 aperture and a 114° field of view. It has a LDAF (laser detect auto focus) sensor, as well as optical and electronic image stabilisation.

The Google Pixel 7 Pro has all of the above, but also adds a third camera module into the mix – a 48 MP Quad Bayer PD telephoto camera. This lens, with an f/3.5 aperture and a 20.6° field of view, uses a 5x optical zoom lens, and also powers the digitally powered 30x Super Res Zoom mode.

This mode crops in and resamples the image to de-noise it. Google says this will achieve optical quality equivalent to a 10x telephoto zoom on a DSLR or similar camera. It also works the same way when you pinch and zoom to crop into an image, allowing you to effectively create a telephoto shot after the fact.

You can distinguish the Pixel 7 Pro from the vanilla Pixel 7 by its additional circular camera module.

Another mode unique to the Pixel 7 Pro is Macro Focus, which gives you a 3cm minimum focusing distance to play with. Google says it will render small details with impressive sharpness and vivid colour. Both the Pixel 7 and Pixel 7 Pro are getting the same front camera – a 10.8 MP fixed-focus f/2.2 module with an ultrawide 92.8° field of view.

There’s also the interesting-sounding Photo Unblur, which Google says uses machine learning to reduce blur and noise in images – even old ones that are not necessarily taken on a Pixel phone. Google developers showed off a video of the Pixel phone touching up images that had been taken years ago on an entirely different phone (referred to in the presentation as ‘taken on that phone’, presumably meaning the iPhone). Another feature is the Magic Eraser for quickly dealing with blemishes in editing, or even removing unwanted objects from images.

Real Tone algorithms have been extensively trained to capture all skin tones faithfully. At the Pixel 7 launch event, Google representatives said that the company has fine-tined its exposure and colour balance algorithms specifically for capturing darker skin tones accurately, describing the Pixel 7 as the ‘most inclusive camera’.

The Night Sight mode has been improved. It now only needs exposures half as long to capture sharp images in low light.

Impressively, the video specs are pretty much the same across the two handsets – so video content creators may want to opt for the cheaper Pixel 7, unless you’re really hankering for that extra telephoto zoom.

The new Pixel 7 phones both shoot 4K video at up to 60fps, on both rear and front cameras. They can capture 10-bit HDR for a wider colour range. The Cinematic Blur mode simulates a shallow depth of field, and the built-in stabilisation enables various panning and moving modes. Both phones also offer 4K timelapse, as well as an astrophotography timelapse mode for night-sky shooting.

The Pixel 7 is designed to synergise well as part of a complete Google Pixel digital ecosystem.

The Google Pixel 7 and Pixel 7 Pro are announced alongside the new Google Pixel Watch. They are available for pre-orders now, and will be on general sale from October 13. The Pixel 7 is priced starting at £599 for the lowest-storage version, while the Pixel 7 Pro starts at £849.

Which camera is best for connecting to smartphones?