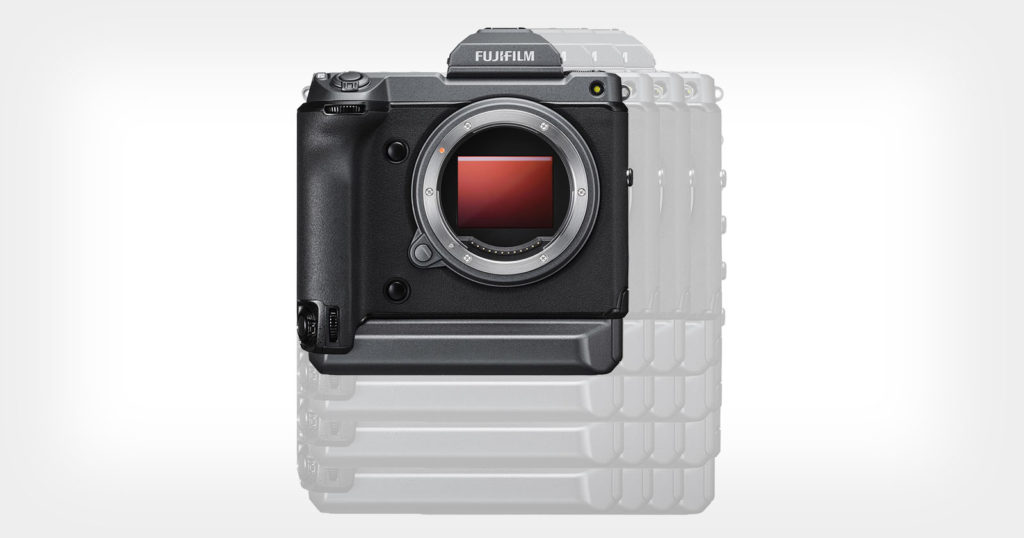 Even with its relatively smaller sensor, the GFX 100 seems to have no compromises in image quality. Low light and dynamic range performance are on par with larger sensor cameras such as the $48,000 Hasselblad H6D-400c.

What is Pixel Shift?

The Fujifilm GFX 100 has a feature that allows it to produce 400-megapixel files even with a sensor that’s only 100-megapixels. It manages to do this by stacking 16 images together and then stacking them in post. Each individual image is shifted by one pixel and this has two major benefits.

The first benefit is that the red, blue, and green pixels are no longer interpolated. Each pixel is correctly assigned to one of those three colors.

The second benefit is that with the extra data from the other 15 images, Fujifilm’s software can increase the resolution to 400-megapixels. This is interpolated, although due to the extra information it’s a very sophisticated form of interpolation.

Pixel shift features are not unique to Fujifilm, as several other manufacturers have produced cameras with similar features. Cameras such as Pentax, Sony with its a7R series of cameras, and of course Hasselblad with its Multi-Shot cameras.

The key limitation with Pixel Shift features is that they can only be used effectively on still-life subjects. Any movement in the image can create unwanted artifacts that may prove difficult to remove or workaround.

With the Fujifilm GFX 100, there is a steep cost for using the Pixel Shift features. These costs come in the way of storage, time, and usability.

When it comes to storage, it takes 16 raw files to produce one individual Pixel Shift file. This amounts to approximately 5 GB worth of data. This is without taking into account potential PSD files and any extra storage requirements through the workflow.

There is also the additional time that is required for each image. Depending on your computer’s performance, it can up to 25 minutes just to produce one image. If anything goes wrong with any of the individual files, you may be required to start the whole process again. More than likely, things will go wrong because the biggest problem with Fujifilm’s Pixel Shift feature is the fact that you cannot use the mechanical shutter.

The GFX 100 is forced into using its electronic shutter when shooting in the Pixel Shift mode. This means that flash lighting along with a fast shutter speed is out of the question. You can of course use continuous lighting, but at smaller apertures, you are forced to use slower shutter speeds.

The slower shutter speed and the high number of images required per Pixel Shift mean that the potential for error is significant. It took us almost 4 hours to produce one pixel-shift image where all of the images were sharp and had no motion blur. Even with heavy tripods, 2-second delays, and tethered shooting, The Fujifilm GFX 100 is highly susceptible to issues.

To put this into context, the Hasselblad H6D-400c requires less than half the number of files to produce a Pixel Shift image. This meant we were able to produce a successful multi-shot image with just one attempt. The Hasselblad can also fire the mechanical shutter when using its multi-shot mode meaning flash and high-speed shooting is still possible at smaller apertures.

With the Fujifilm GFX 100, the cost of using Pixel Shift features may still have been worth it if the result were good enough. Unfortunately, the results are mediocre, and simply not worth the effort.

For instance, the wood grain in the Pixel Shift image has more detail and appears sharper too. Even in the second comparison, the vein structure in the leaf is more defined. Essentially, there is definitely an improvement when using the Pixel Shift feature.

However, the improvements gained from using Pixel Shift are minimal at best and not at all worth the ridiculous effort. The resolution has increased, although the actual detail in the image hasn’t increased by a significant amount. The image simply appears slightly sharper and less pixelated as opposed to having more actual detail.

Why This Feature is Pointless

The Pixel Shift features in the Fujifilm GFX 100 are pointless, mostly because of AI upscaling software by Topaz Labs and Adobe. Gigapixel is one of the AI-powered software from Topaz Labs, and it’s used to intelligently increase the resolution of an image. You can effectively take any standard 100-megapixel image taken with the Fujifilm GFX 100 and upscale it in the software to produce better results.

When you compare the Pixel Shift file against the gigapixel upscaled image, the latter distinctly better. The upscaled image appears sharper with a greater degree of detail. Even in complex areas on the leaf, wood grain, and felt textures, the upscaled image looks more defined.

This is actually not the case with Hasselblad. The H6D-400c produces results that not even Gigapixel can seem to match. When you compare the upscaled Fujifilm image to the multi-shot image, it’s clear that the Hasselblad file is still better.

Even with just 6 images, the Hasselblad is able to interpolate details and resolution far more effectively than both Fujifilm and Topaz Labs software. It’s simply unmatched in this specific area. Even if you take a standard 100-megapixel file from the Hasselblad and upscale it in gigapixel, the multi-shot image is still better.

The Pixel Shift features in the Fujifilm GFX 100 are a waste of time and effort. You can produce better results simply by upscaling images in post. This cuts out the need to use the electronic shutter and reduces the storage costs by a significant degree. Even without Gigapixel software being in the picture, the results from the Pixel Shift feature are mediocre at best. It’s individually not worth the effort and when you start to consider AI software too, it becomes a pointless charade.

In order to make this feature useful, the number of images required per Pixel Shift needs to be reduced by at least half. The mechanical shutter also needs to be available otherwise the whole feature remains a badly implemented afterthought.

One could argue that with a mechanical shutter, Pixel Shift wouldn’t be possible due to the vibrations. However, with a sufficient delay between each shot, I don’t see how it could be a problem. Hasselblad manages this quite effortlessly even with its much larger sensor.

As of right now, the Pixel Shift features in the GFX are not effective for high-end use. It’s essentially just a half measure and you’re better off spending the extra money to rent or buy the H6D-400c instead.

The Fujifilm GFX 100 is still probably the best medium format camera currently on the market. Not only is it incredible value for money (especially when you take the GFX 100s into account) it is an utterly marvelous camera. As long as you process the GFX files with a custom ICC profile, I believe it can produce some of the best results right now.

With that in mind, the issues the GFX 100 has with its Pixel Shift features are insignificant. In the grand scheme of things, this is an extremely minor issue that affects very few photographers. Nonetheless, it’s still important to highlight this issue with the hopes that Fujifilm can improve it. As discussed above, there are only two areas where Fujifilm falls short. If these can be addressed, I believe the Fujifilm GFX 100 would indisputably be the best medium format camera on the market.

About the author: Usman Dawood is the lead photographer of Sonder Creative, an architectural and interior photography company. The opinions expressed in this article are solely those of the author. You can find more of Dawood’s work on his website, Instagram, and YouTube.