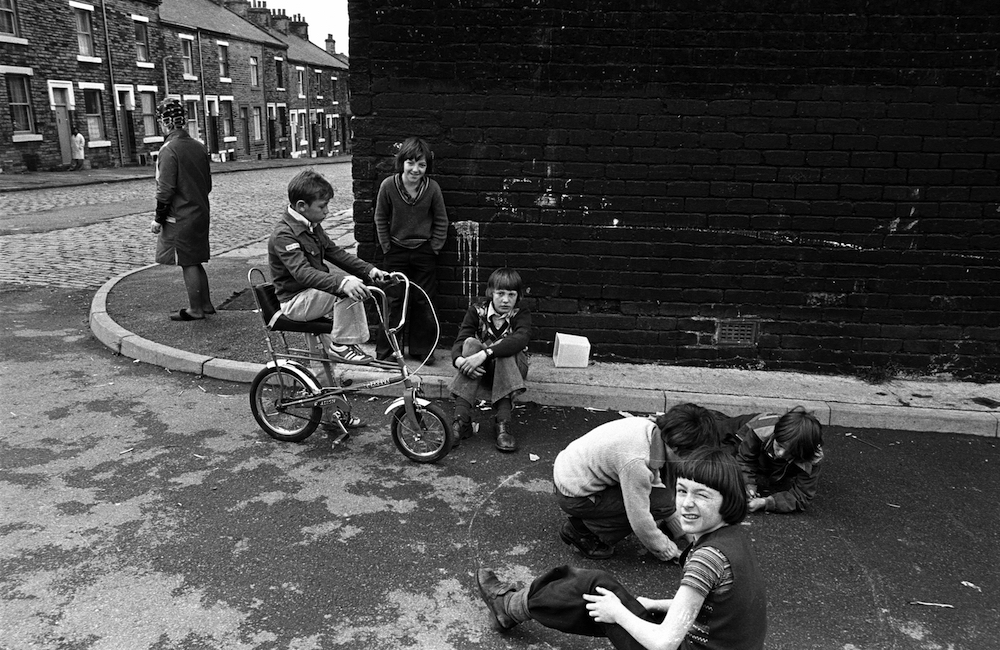 From 20 August 2022 the Salts Mill near Bradford will show the first ever career retrospective of internationally acclaimed, Bradford-born social documentary photographer Ian Beesley.

Edited from Beesley’s archive of 60,000 images, the exhibition will include previously unseen pictures as well as some of his best-known works created during a career spanning over 40 years.

When Beesley (born 1954) was expelled from school he found work in his local sewage works.

His colleagues urged him to find a passion and engage in education.

With their help, he found photography and headed first for Bradford Art College, then Bournemouth & Poole College of Art.

On graduating he was awarded the Kodak scholarship for social documentation.

Thus began a lifelong study of the North’s cultural and industrial heritage, with people at the heart of almost every picture.

Babe, one of the last Yorkshire miners, 2010. Ian Beesley explained, ‘I spent years photographing Hayroyd’s Pit in Clayton West, Yorkshire. Babe was a face worker. He asked me to take a formal portrait with my plate camera after he had finished his shift and was still covered in pit dirt. He wanted the photograph for his grandchildren and their children. Babe said, ‘We are the last of the miners and soon we will all be gone, I want my grandkids, their kids and their grandkids to know I was a miner and this is what I looked like.’ © Ian Beesley

Beesley soon found himself documenting the brutal closure of core heavy industries such as mining, iron and steel production.

The nobility of labour and the horror of one’s skills being forcibly rendered obsolete figure largely in these works.

In recent years Beesley’s work has encompassed physical and mental health through his involvement with important medical research projects including the Bradford Institute for Health Research’s Born in Bradford project and the University of Exeter’s IDEAL and ENLIVEN projects researching the effects of dementia.

The detailed notes Beesley makes around each shoot make for fascinating reading.

Some of these notes will be displayed alongside the photographs, beneath the iron girders of Salts Mill’s UNESCO World Heritage Site, which has a quarter-mile long roof-space.

Fish ‘n’ chip van, Otley Road, Bradford. Ian Beesley explained, ‘The chip shop owner told me he had to fire one of his assistants because he kept parking the van the wrong way round.’ © Ian Beesley

Beesley has previously had exhibitions at Milan Photofestival, Italy; the International Industrial Photography Festival, Shengyang, China; the Imperial War Museum London and the Smithsonian Institute, Washington, USA, amongst others.

His work is held in important national and international collections, including the Royal Photographic Society, the People’s History Museum, the National Science and Media Museum, the Smithsonian Institute, the National Museum of Labour History Helsinki.

He has published over 25 books and won many awards, including in 2012 an Honorary Fellowship from the Royal Photographic Society.

In 2019 he received an honorary doctorate from the University of Bradford for his significant contribution to the artistic, cultural and social well-being of the city of Bradford

Mr. Beesley has requested that we include the fact that he is a Bradford City AFC season ticket holder.

‘You’re not singing anymore’, Bradford City fans in the Kop taunt Spurs fans after City equalise in the last minute of the game, 15 September 1999. Ian Beesley explained, ‘On 9 May 1999, Bradford City was promoted to the Premier League. In July I was appointed the artist in residence for the 1999-2000 season. I found the transition from ardent fan to photographer, from spectator to observer, very difficult indeed. I confess I missed quite a lot of photo opportunities by becoming far too involved in the game, but, hey, so what – I’m a Bantams fan first, a photographer second!’ © Ian Beesley

It will be open from Wednesday to Sunday from 11am till 4pm. Admission is free.

To find out more go to the Salts Mill website.

How to make photography a successful career!