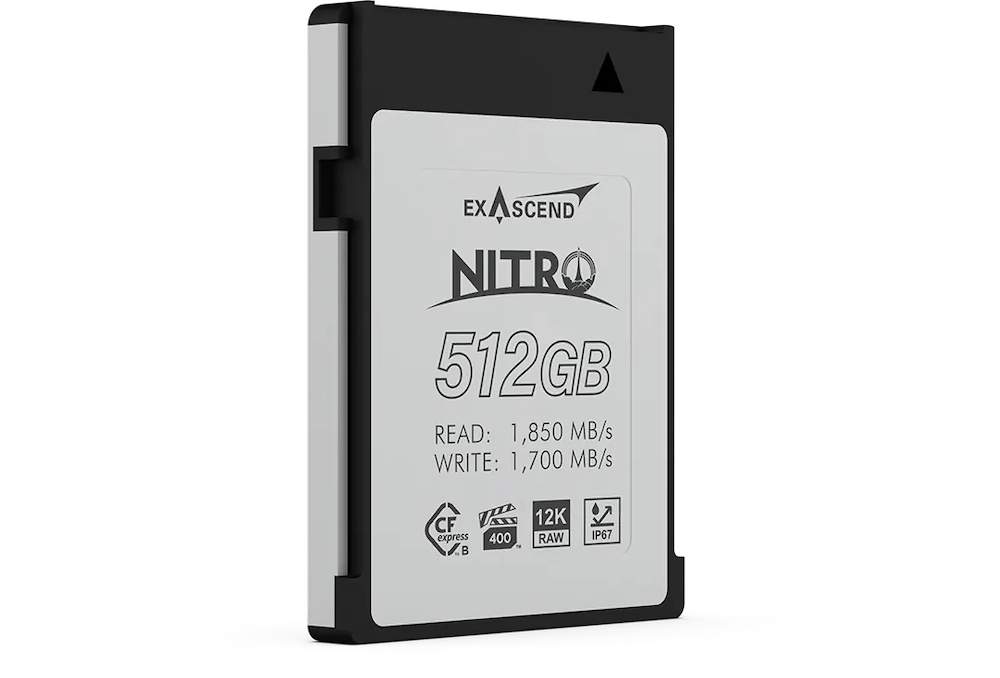 The Exascend Nitro CFexpress card is said to have has sustained 1,850 MB/s read and 1,700 MB/s write speeds.

There are no current cameras which use CFexpress Type B cards that require write speeds of above 850MB/s, so the Nitro card should be future-proofed for some time.

Exascend has stated the Nitro card has sustained write speeds that make it perfect for use with cameras such as the Canon EOS R3, EOS R5, EOS R5 C, Canon EOS-1D X Mark III and the Nikon Z 9.

What does VPG400 certification mean?

The Exascend Nitro has been certified VPG400 by the CompactFlash Association using its stringent Video Performance Guarantee Profile 4 (VPG400) qualification.

This means that the Nitro CFexpress card is capable of delivering sustained video recording performance in even the most demanding of cinema camera systems.

To attain VGP400 certification a card needs to be able to provide sustained write speeds of 400MB/s without dropping any frames.

The 512GB capacity is over three times the capacity of existing VPG400-rated CFexpress Type A cards, which until now, were the only cards to gain a VPG400 rating.

In late May 2021 Western Digital revealed plans to release what would’ve then been the world’s first VPG400 CFexpress Type B card when it said, ‘the new card is expected to be available this summer’, but it has yet to come to market.

The upcoming Exascend Nitro card is also IP67-certified for dust and water resistance and features a next-generation-ready CFexpress controller.

It also has shock resistance (MIL-STD-810G), electrostatic discharge (ESD) protection, an X-ray proof design, and protection against damage from magnetism.

Exascend has also developed a new 20Gbps CFexpress reader (Exascend’s current CFexpress Type B card reader operates at up to 10Gbps) in tandem with Nitro CFexpress to enable very fast offloading of footage.

The new 20Gbps card reader is said to be able to transfer footage from a full 512GB Nitro CFexpress card in under five minutes.

The high-speed CFexpress reader also allows users to upgrade their Nitro CFexpress cards to unlock even higher performance when the next generation of the CFexpress standard launches in the future – hence it’s future-proofed.

The Exascend Nitro CFexpress card will come with a five-year global warranty that covers any issue with the card and its components. Exascend offers a factory data recovery service that can retrieve data from even severely damaged cards.

Neither the 512GB Nitro CFexpress, nor the 20Gbps CFexpress reader have any pricing information available at this time, but the products are expected to launch within the next ‘two to three weeks’, according to the Newsshooter website.

To find out more go to Exascend Nitro CFexpress.