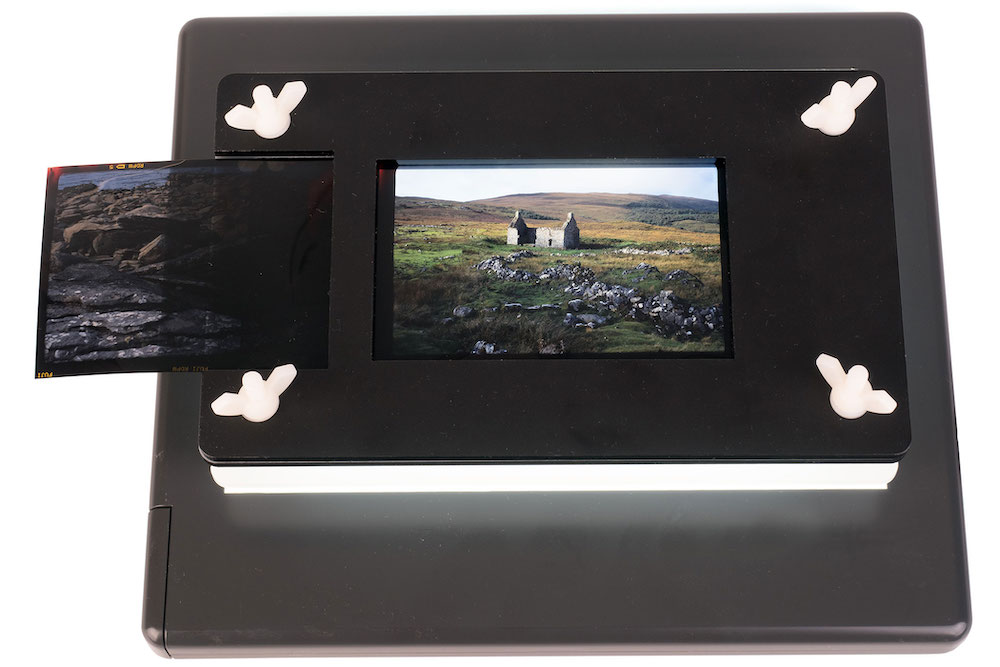 The Essential Film Holder (EFH) kit – a simple-to-use kit that helps you to digitise your film photographs – has just shipped its 20,000th unit in little over two years since its launch.

The EFH was originally the lockdown project of electronics engineer and high-tech company director Andrew Clifforth, with the first Essential Film Holder unit shipped in February 2020.

The news of the new sales milestone comes under a year after, in May 2021 after just 14 months on sale, we reported the Essential Film Holder smashed the 10,000 sales barrier.

Andrew Clifforth explained, ‘I found my flatbed scanner frustrating, as the results were fairly random. I did some research and found out you could digitise negatives with a digital camera and the rest followed on from there. At the time, an exquisitely made Negative Supply film carrier, which supported 35mm and 120mm format film, would have cost about £1400 in total, which I thought was somewhat expensive for the task of keeping negatives perfectly flat.’

Read our review of the Essential Film Holder Kit

The EFH aims to provide a simple, affordable solution for holding film strips above a lightbox so they’re kept flat and perfectly aligned with the camera for shooting and digitising.

The design is simple – four corner posts hold the components together, with a thick translucent diffuser at the base to ensure even illumination.

Recently upgraded from V3 to V3.2, the Essential Film Holder has been further optimised to obtain the best performance possible in terms of holding your negatives ultra-flat and at a perfect alignment with your digital camera.

Andrew Clifforth revealed, ‘It’s a bit of a continuous improvement rather than anything too radical, hence the V3.2. Basically, you can use a less critical set-up and you can utilise a wider angle macro lens for scanning. Originally the geometry of the design allowed for 60mm+ macro lenses. Over time, the old Nikon Ai 55mm Micro and the newer (crop DX) 40mm AF-S Micro lenses have become popular for camera scanning – probably due to the fact you can pick these up for less than £100 on eBay, and they are readily adapted for mirrorless cameras. To best accommodate these, the mask sizing needed to be adjusted by a couple of mm (literally) to create the correct angles. The masks for 35mm were changed at v3.1, a while ago, and then v3.2 brings the 120 masks in line.’

The Essential Film Holder with a 35mm slide

There’s one ‘guide layer’ for the 35mm masks and one for the 120 format masks.

Andrew Clifforth also told AP that a 4×5 version of the Essential Film Holder will be released, ‘in the coming few months. I always told myself H1, 22, so by end June this year, but it depends on other things of course. Beta versions have been with three 4×5 users for a while and I would expect one more round of final adjustments, then the launch process can start. Based on the feedback I’ve received, there is a very significant demand for this 4×5 product, so I want it to be good when it is released.’

With the appearance of new films stocks – such as Kodak GOLD 200 in 120 format, the CineStill 400D film in multiple formats and the crowdfunded FuguFilm 400 slide film – it seems there is a current surge in the popularity of film photography.

Andrew Clifforth commented, ‘Product performance is a given these days. However, I know that for many, pricing is equally critical. Spending hundreds or even thousands of pounds for a film holder would challenge the majority. So, I’ve worked hard to hold the price of the Essential Film Holder at the original launch level, with single-format versions starting at just £73, and the multi-format kit at £90, in order to encourage more people to experiment with their film photography.’

As well as being available direct from the Essential Film Holder website the EFH is now available from a number of European outlets including Retro Camera in Belgium, with US resellers, ‘being announced very soon.’

To find out more about the capabilities of the Essential Film Holder go to www.clifforth.co.uk

CineStill 400D film to be available in multiple formats