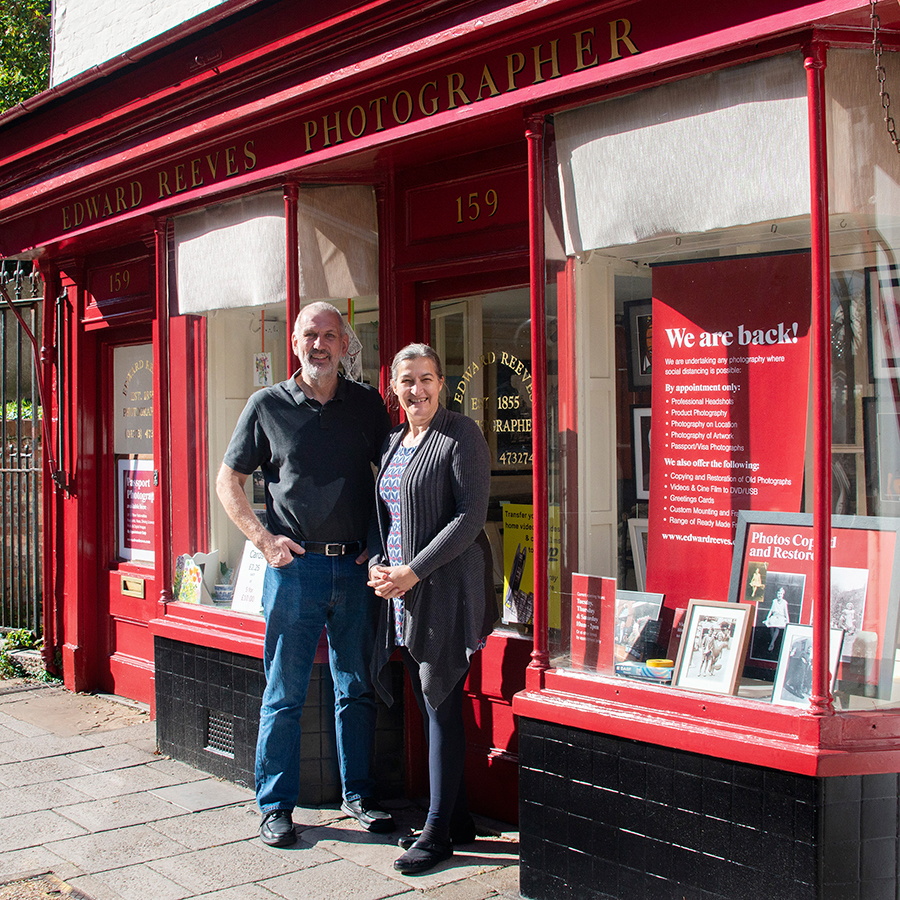 In a new series, photographer and print specialist Mike Crawford explores the history of Britain’s oldest and most prestigious photographic firms. Here he visits the Edward Reeves Studio in Lewes

The historic market town of Lewes is situated in the county of East Sussex, 44 miles southwest of London. Its winding streets, built on a series of hills close to the South Downs, still follow the Medieval road plan dating back centuries. Lewes is proud of its history and heritage and is home to the world-famous Glyndebourne opera house and the Edward Reeves Studio. The town is also known for its annual Bonfire Night, which sees the narrow streets thronged with torch-lit processions; its costumed participants bearing huge effigies of politicians and world leaders ready to be burnt on bonfires.

In recent years, there has been much interest in the Edward Reeves Studio, which is recognised as the world’s oldest photographic studio, run since 1858 from the same premises in Lewes High Street. Not only is the original daylight studio intact, but it also houses the complete archive of four generations of the Reeves family’s work. I recently had the opportunity to visit the studio to meet photographer Tom Reeves and Brigitte Lardinois, initiator of the Reeves Archive Research Project.

The Reeves family’s fourth-generation photographer, Tom Reeves and his wife Tania, outside the Edward Reeves Studio in Lewes. www.reevesarchive.co.uk www.edwardreeves.com

With over 160 years of business, I found it remarkable that just four photographers have worked in the studio. ‘Our generations are very spread out,’ confirms Tom. ‘My great-grandfather Edward was born in 1824, my grandfather Benjamin Reeves in 1875 and my father, also named Edward, in 1908 who worked until 1974. By then I was 14, already printing to a professional level and shot my first wedding aged 18.’

‘My father learnt from his father who had learnt from his,’ Tom continues, ‘though Dad had suffered from strokes when I was 13 so I later learnt the trade at the Polytechnic of Central London, at least in theory. While I had been taught how to be a photographer, in practice you don’t learn much about real life in that situation. My mother had run the business side of things while my dad took the pictures and she supported and shepherded me in my early years of running the business.’

The studio is in a separate building at the back of the property, wood panelled on two sides, with the main north-facing window looking out to Lewes Castle. It retains many of its original 19th-century features, such as furniture and painted backdrops, while in an adjoining room the negative archive is stored. Row upon row of filed and numbered boxes containing around 250,000 glass plate negatives in addition to a similar amount of work on sheet and roll film. It is an outstanding collection of pictures of both the people and families of Lewes, and the town itself.

The 2017 event, Lewes Remembers, viewed from the roof of Lewes Town Hall. Photograph by Tom Reeves

‘I was always aware of the archive, even in dad’s time, says Tom, ‘and as a photographer, I am adding to this end of the archive. Until recently, there was not the opportunity to do anything with it. If someone was interested, the only way was to make a print, but there was no economical way to use the archive. With digitisation it will be possible to make something of it.’

Brigitte Lardinois is the director of the Photography and Archive Research Centre at the London College of Communication, part of the University of The Arts London. She first met Tom and his wife and business partner, Tania Osband, in 2013. ‘I was commissioned to investigate the archive and photographic collections of Glyndebourne. In order to complete the research, I came here on the instigation of Glyndebourne’s press officer and asked Tom and Tania for photographs of the opera house.’

Brigitte then considered the possibility and potential of working on a major project with the Reeves archive. ‘I was Research Fellow at UAL and had been given extra time for a research project.’ She was previously the cultural director of Magnum Photos as well as working for ten years as a photographic curator and exhibition organiser at the Barbican, so had not only a broad knowledge and experience to offer but also a large network of contacts to consult – institutes such as the Victoria & Albert Museum, the Science Museum, and the Imperial War Museum.

‘While not being a specialist in Victorian photography, Tom and I were able to work closely with these specialists, slowly but surely becoming aware of the incredible importance of this collection.’ Since 2014, Tom and Brigitte have collaborated on a series of exhibitions, reflecting the breadth of the archive.

‘It’s been called the family album of Lewes and it is our unique selling point that the company goes back so long,’ Tom tells me. ‘There are families of sitters from several generations, although it goes beyond just the photographs. It’s a real local record. Not only are the negatives here, but also the ledgers and accounts books so we can link back to who had commissioned the photographs.’

‘The business has been handed over from one generation to the next,’ adds Brigitte, ‘and each was respectful of the work of the others, so Tom’s grandfather used the same numbering system that Edward Reeves had started in 1855. Though Tom’s father stopped using glass plates in 1974, the whole glass plate archive was intact in the way it was started, so the next phase with film was also documented and numbered accordingly. For the time being, the Reeves Archive Project officially concentrates on the glass plates; however, our annual exhibitions draw from the whole collection with Tom contributing new work.’

Several of these exhibitions have used images presented on lightboxes, situated in shop windows throughout the town. In 2014, Stories Seen Through A Glass Plate included work from the first three generations of Reeves photographers, each displayed in windows at the exact location of the original photo. ‘Because the 80 lightboxes were so accessible, making the work freely available, people felt both at ease while also invested in it,’ says Brigitte of this initial exhibition.

With the recent centenary of the First World War, two important projects have focused on its impact on Lewes and the surrounding area. In 2015 Tom was commissioned by the British Legion to photograph six contemporary Armed Forces personnel for an exhibition at the National Media Museum, The Story Behind The Poppy, which was subsequently shown in Lewes.

These photographs referenced images by Benjamin Reeves taken 100 years previously of local volunteers. ‘We had never gone into it deeply but knew we had a lot of this material,’ said Tom of the many negatives of soldiers held in the archive. ‘The First World War was a boom time for the business in terms of the number having their portraits taken before being sent to the front, as well as of their wives and girlfriends.’

In 2017 the team curated the event Lewes Remembers, which directly referenced the theme of Remembrance and the soldiers named on the Lewes War Memorial. ‘It’s the project I’m still the most proud of,’ Brigitte says, ‘engaging so many young people with these periods of war.’ While the event was inspired by photographs, its realisation would take place outside of a conventional gallery space, instead involving the town directly with its core message.

‘Inspired by a similar project in Holland, where I come from, I brought the idea to Tom and Tania, that everyone listed on the memorial would be represented by a person the same age, in total 237 servicemen plus one woman. With the help of the five Lewes Bonfire Societies, our volunteers, each with a flaming torch, starting from a soldier’s former home, would congregate at the war memorial. Name, rank, address, and place of death was read out and their torch then doused. Outreach projects like this are such a powerful way to bring history to a generation that maybe isn’t so clearly in touch with this narrative any more.’

Annual exhibitions have continued as does cataloguing the archive. While the studio ledgers faithfully record each sitter or location from the half million or so negatives, it is difficult to search by subjects. For several years, a team of volunteers have been working through these books, digitising the ledgers. ‘We would never be able to scan 250,000 glass plates,’ admits Brigitte, ‘but by transcribing the copperplate writing onto spreadsheets, it will make it possible to search the archive online.’

It is important to remember that aside from the archive, it is also a working photographic studio. While Tom has seen the changes in photographic practice in the past 20 years, his work remains a combination of commercial and social photography. ‘It has changed dramatically since the digital revolution, but we have survived and adapted. While the whole language has changed so much, I think there is still a place for us and know we will continue to go forward in our work.’

It is clear to see the pride Tom takes in both his and his predecessor’s work. This is confirmed by Brigitte. ‘The feedback I get from other scholars is that with the various elements of what is here, aside from the plates, the Victorian backdrops and the studio itself, it’s possible to build a really strong picture of commercial photography seen over 160 years.’

Edward Reeves Studio: The Story Behind The Poppy

‘The British Legion contacted us with the idea to re-create our archive photos with modern service people using the same studio, the same painted backgrounds, the same furniture, otherwise the same physical space where the pictures would have been taken in 1914-15. We shot it on 10x8in sheet film as the original pictures were probably done on glass plates, though sheet film was available then. Pairing these photographs of modern soldiers in their battle dress with those taken 100 years earlier by my grandfather was very powerful. It drew parallels between current service people and their forebears.’ : Tom Reeves

This year’s exhibition again combined the Archive with contemporary photographs by Tom Reeves, highlighting Lewes Town Hall, including photographs of the town’s Mayors taken by all four generations of the Reeves family. ‘What has come to light in the research, is the enormous amount of work we were not aware of,’ remarks Tom.

‘We also found some wonderful pictures taken in the Town Hall from when electricity first came to Lewes. Different electrical devices and a sign saying you can buy a cup of tea made with electrically heated water! Because we are scanning at such a high resolution, details can be seen that would never have been notified before. It’s a tribute to the original photographer that they stand this kind of enlargement.’

Mike Crawford is a London-based photographer and specialist printer working primarily in urban landscape and portraiture. His work has been exhibited widely in the UK and abroad. For over 20 years he has run Lighthouse Darkroom, one of the UK’s premier photographic labs, working for many leading photographers on numerous exhibitions and publications. www.mike-crawford.co.uk.