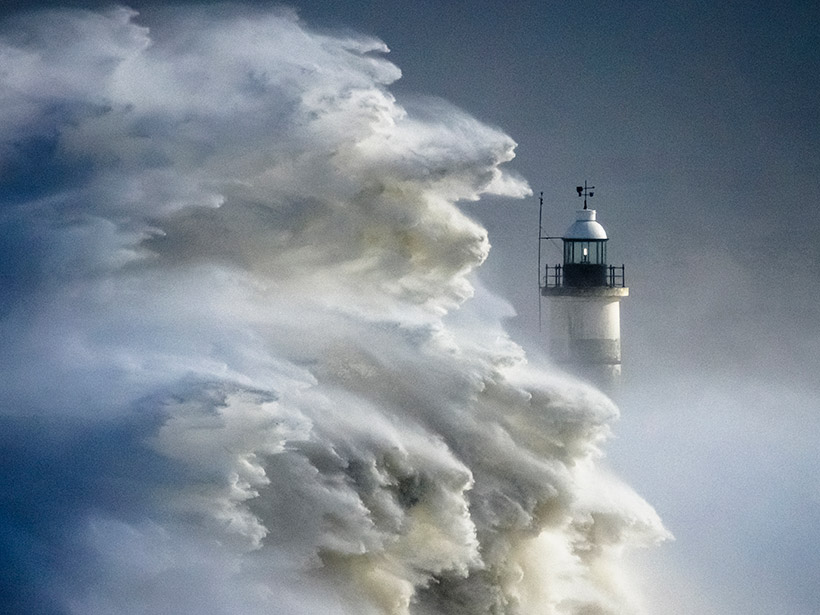 The Royal Meteorological Society has announced the 2022 winners of its popular, annual Weather Photographer of the Year competition in association with AccuWeather. Christopher Ison’s dramatic photo, ‘Storm Eunice’, taken in Newhaven in the UK last year, has taken the title prize. The photograph led a celebration of talented photographers of all ages from all around the world, capturing weather and climate in their most vivid forms.

Of a shortlist of 22 images chosen from entries representing 119 countries, ‘Storm Eunice’ was selected as the overall winner by an esteemed international panel of judges.

Weather Photographer of the Year 2022

After checking the time Storm Eunice would hit as well as the high tides times, Christopher discovered that the storm would hit Newhaven, East Sussex, at almost exactly high tide. When taking his photo, Christopher decided to head to high ground and stand slightly further away from the harbour wall with his back to the weather and was rewarded with a fantastic set of images.

Christopher said: “When the storm was predicted, and it was carrying the first ever red warning for the south coast, I knew I had to find a spot to record it – this was going to be big! I got there reasonably early to find many photographers already drenched in rain and seawater, standing very close to the harbour wall. I decided to head to high ground and slightly further away with my back to the weather. Overall I was rewarded with a set of images I’m very proud of.”

What the judges commented they loved about this photo is the power of nature, reminding us how small and insignificant we are as it conveys the dramatic movement and force of the sea together with the resistance offered by a man-made building. The detail in the giant wave with face-like structures penetrating from the water gives it an almost mystical feel.

Young Weather Photographer of the Year 2022

Supported by The Week Junior Science+Nature

The Young Weather Photographer of the Year 2022 was awarded to Eris Pil, from Pennsylvania in the US, who turned 17 this week! His photo entitled ‘Mammatus Sunset’ was taken on an iPhone, and Eris said:

“The sky was completely lit up in a way I had never seen before, like these beautiful backlit watercolour clouds, displaying these spectacular mammatus clouds overhead. I love mammatus clouds; this was my first time ever witnessing them. I hope I have the opportunity to see them again, and I’m excited to share what they look like with others.”

Mammatus comes from the Latin mamma, which translates to ‘udder’ or ‘breast’, and they are more visible when the sun is low in the sky, and the sunlight frames their pouches.

The judges commented that Eris had done exceptionally well in capturing this extraordinary image of a rare and magnificent meteorological phenomenon that can be difficult to photograph. The judges loved how the beautiful shapes of the clouds were picked out in the dying light of the sunset. The lighting of this scene is outstanding and makes the clouds look like pearl barley floating in the sky. There were a lot of photos of Mammatus clouds across all categories, but these stood out as amazing, and the judges were unanimous in their decision.

The shortlisted images were put to a public vote, with almost 5,500 votes cast for the 22 finalists representing 15 countries. The winning photo is ‘Departing Storm Over Bembridge Lifeboat Station’, taken by Jamie Russell from the Isle of Wight.

Jamie had been chasing showers and storms from west to east across the island in an attempt to capture some of the incredible rainbows. He reached Bembridge as the final shower departed and, in a panic, waded into waist-deep water, fully dressed, just to compose this scene!

Rainbows are optical phenomena that occur when sunlight shines through raindrops. The light refracts as it enters the raindrop, then reflects off the back of the droplet and then refracted again as it exits and travels towards our eyes. This causes the sunlight to split into different colours. The sun needs to be behind the viewer and needs to be low in the sky. The lower the sun in the sky, the more of an arc of a rainbow the viewer will see. Also, the rain, fog, or other source of water droplets, must be in front of the viewer. The angle at which the light scatters is different for everyone, which means that every rainbow is unique to the observer.

In the second year of this competition category, the outstanding quality of entries meant that the judges decided to combine the top images with the main category to form the public vote. However, the judges were left in no doubt that the mobile phone winner should be Aung Chan Thar from Myanmar with ‘Sunset’.

Following an overcast and rainy evening, the sun appeared through the clouds and mist just in time for Aung to capture this beautiful sunset photo. Aung said, “Due to the sun, the pagoda became brighter”.

The judges commented that the way the quality of the light affects the atmosphere is just lovely. The metallic golds and yellows are carried on into the sky beautifully. The rising mists enhance the atmosphere around the road and the golden globe structure in the foreground. The sun disappearing behind the clouds also seems to form an interesting planetary relationship with the globe that adds to this late evening scene.

The Runners Up (decided by Judging Panel)

During spells of cold weather, the mist and spray from Niagara Falls can freeze into ice over the top of the rushing water of the waterfall. Which gives the appearance that the Falls have frozen whilst the water continues to flow underneath the sheets of ice.

However, there are records that the Falls’ waters did stop once in March 1848. Strong winds pushed ice from Lake Erie into the mouth of the Niagara River, blocking the channel completely and stopping the water for about 30 hours. The wind then shifted, and the built-up weight of the water broke through the ice. Subsequently forcing the Niagara River to flow again.

The photograph offers intricate detail of the icicles that have formed around the building and on the rock face. Icicles are hanging tapering pieces of ice that form when the temperature is below freezing. As water drips off the roof or rock, it freezes and becomes suspended in the shape of a droplet. As more water droplets flow over the surface, they freeze on the way down. So the process continues until an icicle forms.

On the cliff of Tavertet in Barcelona, Spain, with the sun low behind and the valley of Sau covered with fog, Emili waited until a Brocken Spectre appeared. “In this geographical area, you can see these phenomena due to morning fog. When it fades, it is possible to see this spectacular optical phenomenon”.

A Brocken Spectre is a large shadow of an observer cast onto a cloud or mist. So, when a person stands on a hill partially covered in mist or cloud, their shadow can be project down onto the mist or cloud if the sun is behind them. An optical illusion then makes the shadow appear gigantic and at a considerable distance away from them. The shadow can also fall onto water droplets of varying distances. This distorts the perception and can make the shadow appear to move as the clouds alter and shift. This combines to make the disorienting effect of a giant shadow moving in the distance.

Young Weather Photographer of the Year – Runner up

While taking a walk through their backyard in India, Shreya spotted the light passing through the tree canopy.

The Tyndall effect is when sunlight is scattered by small particles in the air, such as dust or smoke particles. Similar to Rayleigh scattering, it is the process that causes the sky to appear blue and the sky at sunset and sunrise to appear orange or red. Under the Tyndall effect (and Rayleigh scattering), the shorter wavelength blue light is scattered more than the longer wavelength red light. As our eyes are more sensitive to blue light, we see the sky as blue.

Weather Photographer of the Year (Mobile Phone) – Runner up

An overnight stop in Tarbet, Loch Lomond in Scotland. Plus an early morning trek with dogs Oscar and Ollie up Cruach Tairbeirt revealed this beautiful misty scene to Vince. “The woods, the alps, the loch and Ben Lomond were bathed in ‘Scotch mist’. This shot was taken just before the sun put in an appearance”.

Mist, like fog, is a low cloud or small water droplets suspended in the air, close to the ground. The relative humidity in mist and fog is more than 95%, but the difference between the two phenomena is all down to visibility. If you can see more than 1,000 metres, it is mist. But if it is thicker and the visibility drops below 1,000 metres, it is fog.

Mist is typically dissipates quicker than fog and can rapidly disappear with even a light wind.

The winners were announced on Thursday, 6 October at 6pm (BST) on the Royal Meteorological Society’s Instagram channel @rmets_

All the winners and finalists can now be seen on the RMetS website.

The calendar featuring all the winners and finalists of Weather Photographer of the Year 2022 is now on pre-sale via the RMetS online shop.

Inspired by Weather Photographer of the Year 2022 and want to enter your own images to competitions?

See our list of best photography competitions to enter here.

Weather Photographer of the Year 2022 shortlist shows off stunning images

Marsel van Oosten: making the most of bad weather

Get great shots in any weather