Dominik Schulze Reminds Us of Why We Love Street Photography 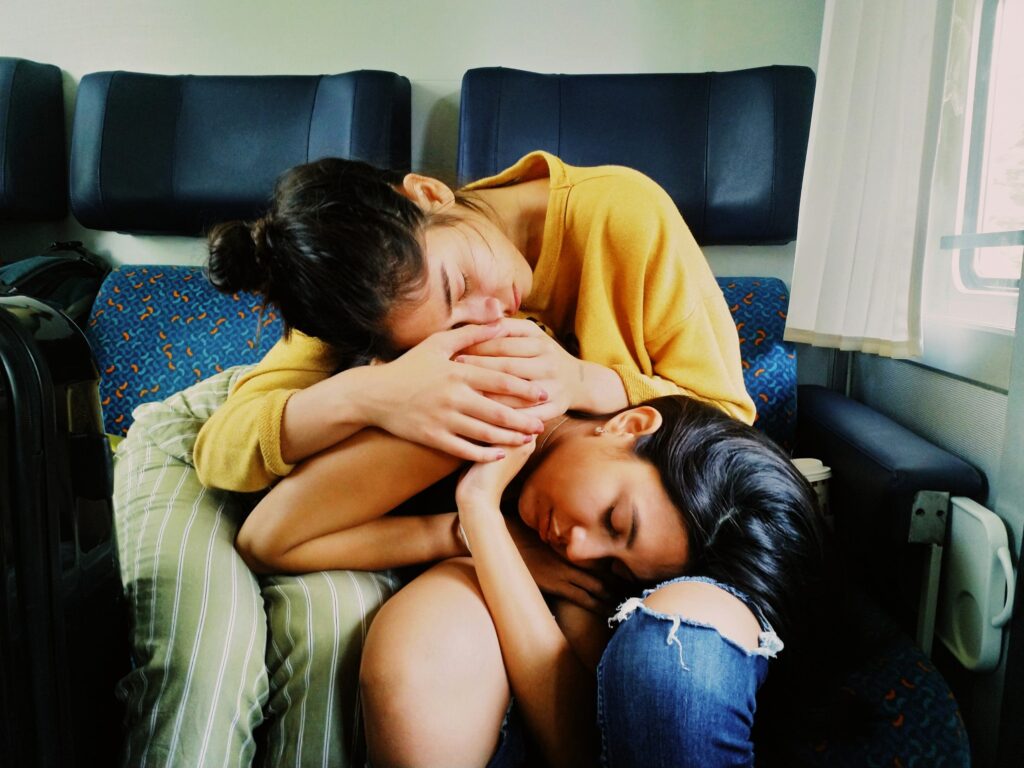 “This photo almost wasn’t taken at all,” the photographer Dominik Schulze tells me. Three years ago, he was on his way home to Dresden, Germany, after a trip to Hamburg, when two young women entered his six-seater train compartment in Berlin. They’d picked up some food, and after they ate, they rested sleepily in each other’s laps, daylight streaming in through the window to illuminate their faces.

“As I was sitting directly opposite them, I thought about taking a picture, but, unfortunately, I couldn’t reach my camera in the backpack above me, so I had to use my smartphone,” Schulze remembers now. “I didn’t want to take it at first because I was worried about what the others in the compartment might think, but, in the end, I decided to take several photos.”

He didn’t get the chance to meet the pair. He’s taken countless pictures since, but that moment of intimacy–an instant where time stood still, even in a crowded, public space–remains a favorite. “They never saw the photo or knew I took it, but I don’t think they would be angry with me for taking it,” the photographer says. “This picture taught me to go ahead take pictures of these fleeting moments, rather than waste time thinking about whether I should do it.”

Titled All I want is you, this photo also convinced Schulze that the best pictures can happen in an instant. In those rare cases, the choice of camera and the search for the “perfect” composition falls by the wayside, and all that matters is the scene in front of him. All I want is you recently won the People & Portrait category at the Mobiography Awards. We took the opportunity to ask the artist about his career thus far, the photographers who’ve inspired him, and the beauty of “mistakes” in street photography.

The Essential Gear of Dominik Schulze

“I currently use a Ricoh GR III and a Google Pixel 4a. All I want is you, my winning photo from the Mobiography Awards, was taken with my old smartphone, a Nokia 8. The compactness of the Ricoh GR is an advantage in the street because you can shoot undetected, and you can always have it with you. The 28mm converted to 35mm is very versatile and forces you to get out of your comfort zone a bit when taking pictures. Still, with time, I see more and more advantages in using a smartphone in street photography, as it allows me to remain unnoticed–especially since I think that, in a few years, we will only see a few ‘real cameras’ in our cities.”

Phoblographer: How did you get started as a photographer, and what drew you to street photography, in particular?

Dominik Schulze: I had a simple film camera as a child, and then I had two digital cameras, but I really started taking photos intensively when I got a Nokia Lumia 920 back in 2013. This smartphone had settings like shutter speed, ISO, and focus directly in the camera app, and I found it interesting to experiment with them.

In 2017, I went from being a casual shooter to a portrait photographer. I then came across Eric Kim’s blog, which mainly covers street photography, and the Ricoh GR, and I found the concept of this camera interesting. The combination of using a smaller camera, traveling, and taking pictures sounded very tempting.

Phoblographer: You describe your photos as “candid moments.” How do you ensure you stay inconspicuous when capturing these fleeting, ephemeral scenes?

Dominik Schulze: As I mentioned, I think the choice of camera is an important point. If you have the smallest possible camera or a smartphone, you look much less like a “photographer” to other people than a tourist or someone who only takes holiday photos.

It’s also important how you behave. In general, I tend to dress in dark clothing so as not to attract unnecessary attention; I even have the inconspicuous logo on my Ricoh covered with black tape. I also like to wait in an interesting place and see what’s happening; that way, you’re much less noticeable to people walking by. In combination with pretending to adjust your camera (there’s an interesting video about this on YouTube by Garry Winogrand) or looking behind people as if you’re photographing a building, this approach makes it very easy to remain unnoticed.

So far, I’ve only been asked twice if I’d just taken a photo: once when I was testing a Fujifilm X100 IV, which is more conspicuous than my Ricoh, at the train station in Dresden, and once in Barcelona when I photographed a dog in front of a shop. The owner ran after me and shouted, “Delete the picture!” I think you have to have this experience once in a while.

Phoblographer: You’re based in Dresden, but you’ve photographed in Lisbon, Rome, Wroclaw, Prague, and beyond. What is your favorite city for street photography, and why?

Dominik Schulze: For those who don’t know, Dresden is in the east of Germany and has one of the most beautiful old towns you can find in Germany. If I could only choose one city, though, it would be Lisbon. The light there has a different intensity; it’s not called the city of light for nothing. Lisbon is ideal for shooting in color and playing with light and shadow. Plus, compared to other European metropolises, Lisbon has a high density of interesting and different spots for photos in a compact city area. The nice weather is an additional positive feature.

Phoblographer: What do you look for in the people you photograph? Do you think there is a common theme or thread that ties them together?

Dominik Schulze: People with character or distinctive looks are interesting, but I pay more attention to the situation people are in. It could be the architecture, the light, or simply two girls in a more personal moment in everyday life. So if the people in my pictures have something in common, it’s that they’re not really out of the ordinary in appearance or behavior. They’re the people you see every day on the street and don’t really notice.

Phoblographer: Much of your work also involves strong light and shadow. Your silhouettes, in particular, remind me of some of Alex Webb’s pictures. What do shadows represent to you, if anything?

Dominik Schulze: Alex Webb is one of my favorite photographers. I am most interested in this contrast of light and shadow; it is a very strong visual element that can make simple, everyday situations look like something out of a film. In addition, of course, with silhouettes, you can simply avoid the problem of people recognizing themselves in a picture. In Germany, the stricter laws about photographing in public keep many people away from street photography, so this is one way around that.

Phoblographer: Relatedly, what lighting conditions are your favorites for street photography? Is there a specific time of day or year when you prefer to shoot?

Dominik Schulze: I prefer sunshine and light that creates strong shadows and contrasts. Although I also like the light of sunrise, I don’t have the time to photograph them. That’s why I tend to concentrate on sunset and the evening/night hours, in addition to lunchtime, as a city can sometimes have a completely different look during those times. I tend to take fewer pictures in the rain or snow, but I plan to expand my portfolio in that area as well.

Phoblographer: Some of your most powerful photographs, including this one from the Holocaust Memorial, are the result of happy accidents, like setting autofocus at the “wrong” point. What role do you think accidents and mistakes play in street photography?

Dominik Schulze: Since the majority of pictures in street photography are “mistakes,” it’s all the more pleasing when a picture is nevertheless successful, even though it has a mistake. Seneca, the Roman philosopher, says about luck: “Luck is what happens when preparation meets opportunity.” So I don’t see such pictures as accidents but rather as lucky events that happened because you were prepared.

That still holds if you are annoyed that a photo could have come out better. The more involved you get with photography, the more you realize how irrelevant the technical parameters can be when we think about the actual picture, especially in street photography or photojournalism. Robert Capa’s pictures from Omaha Beach in Normandy during the D-Day landings are blurred throughout, and technically, they’re not perfect, but they still work very well.

Phoblographer: What has it been like to be a street photographer amid the pandemic?

Dominik Schulze: I had been photographing more in nature when the pandemic hit, so it wasn’t a very significant transition for me. But I generally photographed less during this time. When I traveled again for the first time, it was to Prague, and I found it was not much different from how it usually is.

However, due to the lack of people in the streets, my photography during the pandemic sometimes focused more on animals in the city. Animals are also part of the urban environment, and they offered me a change from your usual street photography subjects. I also focused more on graphic elements and started to depict architecture in a more abstract way, which gave me new input and motivation for future pictures.

Phoblographer: Do you have a single most powerful memory from your time as a street photographer? Is there any specific moment you were able to capture that you’ll always carry with you?

Dominik Schulze: I approach my pictures more from a creative level than an emotional one, and that’s something I still want to work on. I only have a few very strong memories of individual pictures that have touched me. So far, All I want is you is one of those few and one of the more emotional images I have. I value the lessons I learned from it, and I think it will always hold a special place in my mind.