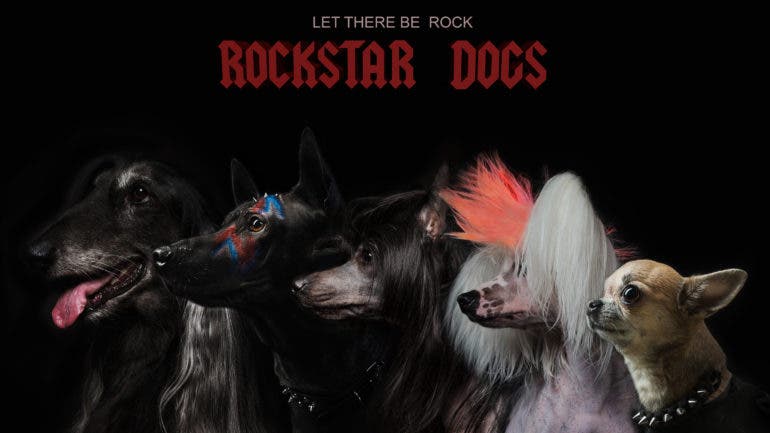 “Sometimes I look at an animal and think, how would he look if he were a human?” says Angelika Goltyaeva of the background behind the idea for this series. A fleeting glance at a picture of an unruly Afghan hound on the Internet sparked an idea that led to an extensive photoshoot with some wild looking canines. With the right makeup, creative hairdressing, and some perfectly placed lights, she’s created a one-of-a-kind rock band shoot using dogs as subjects. And it looks like the dogs had the most fun during this shoot.

Kids and animals are probably among the most difficult of subjects to creatively photograph. After seeing numerous photo series where animals and their lookalike owners pose for portraits, Angelika decided to try something different. It took some very long and trying hours to get these images right. Looking at each of these photos, you can almost hear classic rock anthems playing in the background as the dogs put on their best poses for her camera.

Since I mainly shoot in the studio I use the Capture One program – it’s the best program for me to see a light in the picture to make a crop in format which I need and make color fixing. I love the speed and quality set with cable Tether tools, Capture one and Profoto D2. It helps me to freeze such active animals for the best picture.

Angelika Goltyaeva: My creative path began in childhood by acquainting myself with my father’s cameras – Zenit and Kiev. We took photographs together and then developed them in our darkroom at home, or rather, dad did, and I watched the process like magic. Continued during school and student time with filming friends and their friends. With the appearance of my favorite Lulu West Highland White Terrier breed in 2015, I became interested in photographing pets. In 2017, I began shooting only animals.

An understanding of animal psychology, an interest in art, and a thirst for experimentation give me the ability to create memorable content. I like working with color and creating a little surreal work.

In my work, first of all, the main thing is the comfort of the animal during the filming process. I build the whole process in such a way that the animal does not experience stress and poses for me with pleasure.

Animals give me happiness, a charge of inspiration, and allow me to reveal my creative ideas. Despite the complexity of working with the characters of some animals, I enjoy this experience. Experience is always fun and rewarding. And to answer your question, yes, I have a ton of patience.

The Phoblographer: Where did the idea for this fascinating series come from? Was it based on something you saw somewhere, or just a bright idea that sparked one day?

Angelika Goltyaeva: I love pets; they have their character, temperament, and charisma. Sometimes I look at an animal and think, how would he look if he were a human? And I love the live music concert, their atmosphere, and their energy.

Once I saw on the Internet a photo of an Afghan hound with hair flying in the wind and a bowed head. This shot and gesture reminded me of the bassist of a rock band at a concert, shaking his head. So the idea was born to present the dogs as a musical group.

Then I started thinking about how many members of the band were in the rock band, what breeds would suit which musician in the band. I wanted to show the similarity with people and add humor, so the smallest Chihuahua dog was chosen for the soloist, but with character. I chose the Chinese crested as guitarists – they are very similar to punks if you put the hair on his head.

The Phoblographer: The dogs looked like they had a lot of fun during the shoot. How much time did it approximately take for each dog’s rockstar shot (make up, set design etc)?

Angelika Goltyaeva: I don’t know how long it took for each dog, but it took about 7-8 hours in the studio in total. While one dog was grooming (makeup), I photographed the other.

The Phoblographer: Which dogs’ looks were inspired by real rock stars? Tell us about some of your favorite ones? Did you also come up with some names for the doggy stars and bands?

Angelika Goltyaeva: I wasn’t inspired by full looks, only part of things like the face arts of group like Kiss, the haircuts of the musicians. The main inspiration is my feelings during the live show, the atmosphere, and the colors. The name of the band is “Rocky doggy.”

The Phoblographer: Rockstars can be really demanding off stage. Were the dogs any different or were they mostly curious and well behaved during the shoots?

Angelika Goltyaeva: It was interesting for all the dogs to take part in the shoot because most of them take part in dog shows, someone has already been a photo model more than once, and still, others are ready to do everything for a tasty treat. But nevertheless, there were a couple of difficulties. First, in addition to one shot with smoke, there should have been several, but the smoke itself, its sound and smell frightened the dogs, and they refused to be with the smoke machine in one room and tried to disappear.

However, on a test frame, I managed to catch one with drums and smoke. The second challenge was getting the screaming/yawning dog into the microphone. This frame alone took us two hours because whatever we did until the dog was completely tired, we could not get this frame.

The Phoblographer: Did any of them try to play any of the instruments you had? I’m getting the feeling that this shoot was really challenging but also loads of fun.

Angelika Goltyaeva: Musical instruments did not arouse great interest in dogs; they were even more careful, as none of them had seen such figures before and had not heard the sound close up. Someone was afraid to sit down for them at first, but the kind voice of the owner and sweets worked wonders, and soon they were no longer afraid of them and sat next to the instruments.

The Phoblographer: How did you and your team select the looks for each dog? Did their own personalities have a lot to do with this?

Angelika Goltyaeva: The selection of models took place more on the appearance of the dogs, the temperament of the breed, and personal views on the rock group.

The Afghan hound, in my opinion, was a perfect match for a drummer, with long hair shaking while beating a rhythm or setting the tempo of the entire song.

For the role of guitarists, two Chinese crested brothers were chosen, who are ready to support each other while playing.

The bass guitarist is a Thai Ridgeback dog; she is daring and cute at the same time. And we decided to make the most basic role with humor “a small dog – big ambitions” for the soloist.

The Phoblographer: Any plans for a future series with more animals and maybe different genres of music?

Angelika Goltyaeva: Yes, sure! Most of my ideas involve more than one dog to expand the topic and show imagery. By the way, I noticed that among many of my projects, there is the main line – the similarity of dogs and people in anything. Also, I’m in the process of one personal social project. About a comfortable life for pets – it’s the minimum that we can do for them, and I get very upset when pets get homeless.

All images by Angelika Goltyaeva. Used with permission. Visit her Instagram and Behance pages, as well as her website to see more of her animal photography.