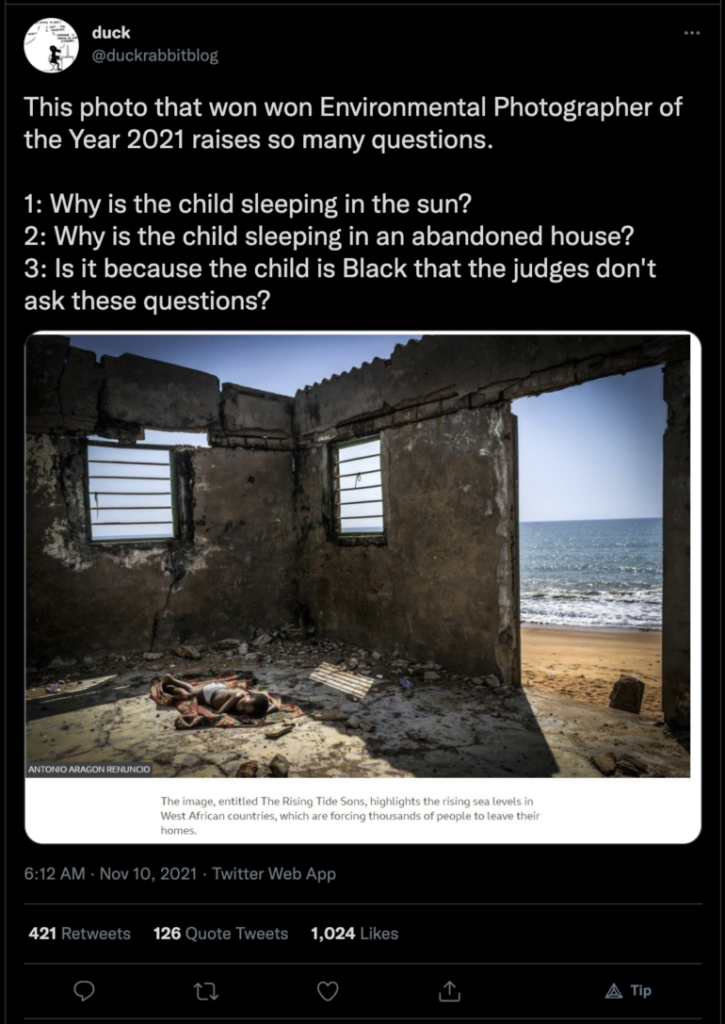 Photojournalism and documentary photography share one common goal: to tell the truth. They’re two photographic disciplines where creative license gets put to one side, and pure documentation takes the front seat. It would be unethical to manipulate or stage an image, only to then pass it off as authentic. Sadly, photographers don’t always stick to ethics. Some go their own route for personal gain.

As each year passes, it seems there’s a least one controversial talking point from the world of candid photography. In 2020, the World Press Photo award was under the spotlight for all the wrong reasons. And this year, several sources online are highlighting an issue with the Environmental Photographer of the Year (EPOTY) award.

Editors note: Although we are reporting and offering an opinion on this story,The Phoblographer isn’t accusing anyone of staging or manipulating photographs.

The Background of the Environmental Photographer of the Year

Twitter user @duckrabbitblog (real name Benjamin C.) started this thread talking about the winning photo of EPOTY. He raised his concerns about the authenticity of the winning series of images, suggesting there’s a possibility they were staged.

The opening of the thread starts with three questions:

Benjamin C. believes that the photographer in question (Antonio Aragón Renuncio) may have staged the scenes to make the child/children look like they’re struggling more than they are. He suggests Renuncio exaggerated a situation for his personal gain, that being the $10,000 he received for winning the award.

In an email exchange, Benjamin C. told me he had the images tested to see if they were digitally manipulated. He found no evidence of this being the case.

Did Renuncio stage the images? I can’t say. However, having spent many years in developing countries, I’m yet to see a situation that replicates those from the award-winning images. But that’s not where the controversy ends.

After coming under immense pressure to comment on the allegations of staged images, EYTOP released a statement. In it was said the following:

“There have been important questions raised regarding the staging of images selected for publication by the competition. While staging is not specifically barred in our 2021 competition rules and guidelines, the discussion on how our competition protects the rights and dignity of vulnerable populations is an important one that we take very seriously.”

So, where’s the problem? The conversation regarding our environment is toxic at best. The extreme opinions held on both ends of the spectrum fight over humanity’s contribution to the decline of our natural world. Meanwhile, those in the middle try to make sense of it all by carrying out informed, balanced research. We cannot underestimate photography’s role in how we tackle things like climate change. With that, I think we need to be as transparent as possible when we report on the real-world impacts of our actions on our environment.

EYTOP saying it’s essentially okay to stage a narrative completely removes any credibility the organization has. Considering the thousands of dollars up for grabs, it encourages photographers to make emotionally charged narratives rather than honest, transparent ones.

And there’s a second message being sent: it’s okay to exploit those in the developing world if it means you’ll get a good set of photographs. If the winning photographer did stage the images, that means they asked young children to lay on the floor and look like they’re suffering. Let that thought sink in.

The statement is nothing more than covering the organization’s back, rather than those potentially being exploited.

Another issue here is that these stories are being picked up by large publications like CNN. When reporting on the winning photos, the headline read: Haunting image of coastal erosion wins Environmental Photographer of the Year 2021. Well, it’s only haunting if it’s true. If the image isn’t authentic, then this is a false narrative and goes against everything photojournalism is about: the truth.

We would prefer to have included comments from Renuncio. He deserves to defend his position. We reached out to him for comment. However, at the time of publication, we are yet to receive a response. Until he comes forward, the speculation and doubt surrounding the authenticity of his work will remain.