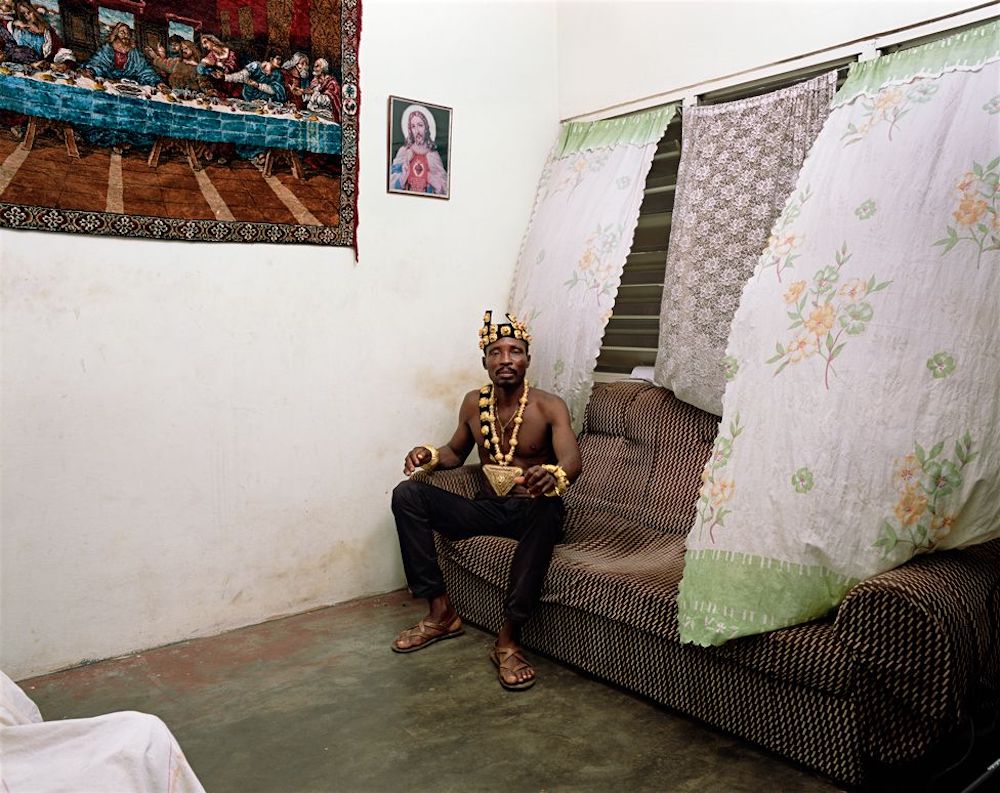 Deana Lawson was announced as the winner of the prestigious Deutsche Börse Photography Foundation Prize 2022 at a special ceremony at The Photographers’ Gallery (TPG), London, on Thursday, 12 May 2022.

The influential prize (worth £30,000) has been presented in partnership with Deutsche Börse Group since 2005 – it rewards artists and projects recognised as having made a significant contribution to international photography over the past 12 months.

Lawson, who comes from Rochester, New York, was awarded the prize for her solo exhibition Centropy, which was originally exhibited at the Kunsthalle Basel from June to October 2020.

Lawson presents a distinctive and provocative approach to image making, which, while drawing on art history as well as the wider traditions of photography, proposes a wholly original arena to reframe and reclaim the Black experience.

The photographer, who is a professor of visual arts in the Lewis Center for the Arts at Princeton University, often casts models to pose in a style reminiscent of family photographs.

Despite that, there is an intimacy to her portraits and seeming familiarity between the characters, whom Lawson describes as, ‘a mythological extended family.’

Her interest lies in exploring the space held by communities and individuals and seeks to assert a position within an ever-shifting terrain of racial and ecological disorder for which she evokes a range of strategies.

Lawson’s subject matter is carefully choreographed and harnesses the tropes of family photographs to explore intergenerational relationships and their effects within Black culture.

She frequently positions women as central protagonists, alongside the presence of elders, totemic male figures and symbolic or archetypal characters, such as the celestial child.

While her figures are often shown in apparently familiar domestic settings, the images contain unsettling elements which function as what the artist calls ‘portals’ into other worlds or portray scenes of death or birth.

The presentation at TPG is Lawson’s first institutional show in the UK.

It includes large-scale photographs spanning 2013-2020 are encased in mirrored frames to reflect and utilise light – they are presented alongside holograms and rough-hewn blocks of crystal.

Brett Rogers OBE commented, ‘Deana Lawson is a deserved winner of this year’s prize, not least for the sheer inventiveness and complexity of her approach to image making. Her work, which reframes and reclaims the Black experience, harnesses the traditional and the experimental and opens up a very unique connection between the everyday and the mystical. Her subject matter sits somewhere between the “here and now” and the past, a person and a people, the staged and the naturalistic, in a manner which is not didactic or issue driven but genuinely radical. The boldness of her vision and the empowered sensibility she brings to her protagonists is clearly the result of a carefully nuanced collaboration with her cast of ‘family’ members, which places her in a rare position of partner or narrator rather than auteur. Huge congratulations from myself and my fellow jurors. I also want to acknowledge the extraordinary work and talent of fellow shortlisted artists Anastasia Samoylova, Gilles Peress and Jo Ractliffe.’

Anne-Marie Beckmann, director of the Deutsche Börse Photography Foundation, said, ‘While she [Lawson] is grounded in the traditions of photography and in many ways quite classical, her images offer up new possibilities for both the medium and its reception. Interrogating the position of the black body in visual culture and playing with tropes such as family portraiture, artifice and nature, she takes the personal and makes it political, forcing an often-unsettling contemplation of how and what we see.’

The exhibition (curated by TPG’s Katrina Schwarz) showcasing the four shortlisted artists for 2022 – Deana Lawson, Gilles Peress, Jo Ractliffe and Anastasia Samoylova – will remain on display at The Photographers’ Gallery, London, until 12 June 2022.

The exhibition will then tour to Deutsche Börse’s headquarters in Eschborn/Frankfurt, Germany, from 30 June 2022 onwards.

Founded in 1996 by TPG, and now in its 26th year, the Prize has become one of the most prestigious international arts awards and has launched and established the careers of many photographers over the years.

In 2016 the Prize was retitled the Deutsche Börse Photography Foundation Prize following the establishment of the foundation as a non-profit organisation dedicated to the collection, exhibition, and promotion of contemporary photography.