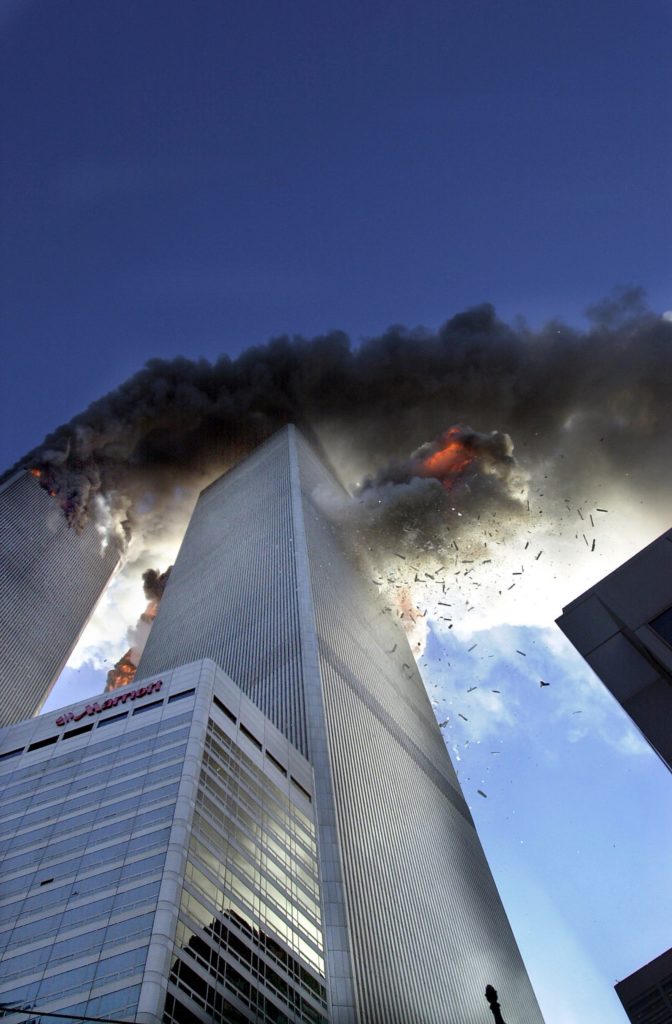 “I wish it had never happened, and I wish I had never captured that moment.”, says photojournalist David Handschuh of the fateful moment when the second airliner flew into the South Tower on 9/11. His instincts told him to keep on shooting even after that, and he continued to do so until an I-beam fell on him. He didn’t think he’d get out alive, but he was one of the fortunate survivors from that day. He tells us what that harrowing experience was like and why photojournalism is necessary to keep the truth alive.

Want to get your work featured? Here’s how to do it

Twenty years ago, the world took a collective gasp. A lot of things have never been the same since. It was my first week at university back then. I still remember being on the bus to home when breaking news on the radio played. An airplane had hit the Twin Towers. It was only when I got home a short while later that the depth of the situation unfolded. And then we all saw, live on TV, the second plane flying in. A moment of shock reverberated around the world. A moment that David Handschuh captured on camera, but didn’t even know he had, until the next day in the hospital. In the true spirit of photojournalism, David went on capturing photos until he was physically unable to do so. An image we all have probably seen. One which is etched in our minds possibly forever.

The Phoblographer: Hi David. Please tell us about your early life and foray into photojournalism.

David Handschuh: I got a camera when I was like, 12 years old. It was just the natural curiosity of a firstborn child. I was absolutely hooked from the very minute that I got the little Canon TL. It was just a desire to shoot photographs with other people. I grew up reading the New York Daily News, which had a centerfold of pictures every single day. It had two pages of photos right in the middle, and that’s what I wanted to do.

The Phoblographer: Whereabouts were you that morning when you heard of the attack on the first tower. As you rushed to the site, what was on your mind?

David Handschuh: I was heading to teach a class at NYU. I wasn’t scheduled to work until later that day. I was on the West Side Highway about a mile and a half north of the World Trade Centre when the first plane hit. I followed a fire rescue truck the wrong way. They were going southbound in the northbound lane of traffic, and I followed right behind them.

What was going through my mind was, “I hope I don’t crash into the back of the fire truck”. It was completely unclear about what was happening. All I knew at that point was that a plane had hit the World Trade Centre, and it was on fire. My initial thought was that it was a small plane or a private plane. But as we were driving down the West Side Highway, I saw this gigantic hole in the side of the building with flames and smoke coming out of it but had no idea that it was a commercial jetliner. It wasn’t anything that entered my mind at that point.

The Phoblographer: With all the confusion and chaos that morning, how did you find the strength to shoot diligently?

David Handschuh: I don’t think it was strength; I think it was just reptilian memory. A couple of times, I had to say to myself, “Pay attention, focus, capture the moment”, in my mind. I think if I would have just concentrated on what I was seeing, I would have just stood there with my mouth open. But my job was to take photos, and I just had to keep reminding myself to focus. And I don’t mean focus with my lens, but focus on the job that had to be done.

The Phoblographer: United Airlines 175 crashing into the South Tower. A deafening moment you captured on camera that was viewed millions of times the world over. What thoughts ran through your heart right after pressing the shutter?

David Handschuh: Till this very moment, I didn’t know what the flight number was. I wish it had never happened, and I wish I had never captured that moment. But it did happen, and I think it’s important to share that moment with other people around the world.

The Phoblographer: Life must have slowed down for a while for an instant after that capture. What happened next?

David Handschuh: That’s very interesting. I don’t remember if I reviewed the image off the camera or not. There was just so much happening, and it was so unbelievable that there was really no time to check the pictures and see what you had. Because if you were checking your camera, you were missing something else happening around you.

Actually, I’m pretty sure that I didn’t check my camera because I had no idea that I had taken that photo until the next day when I saw the newspaper.

The Phoblographer: You’ve often said that you were lucky to be alive after that I-beam fell on you. The firefighting heroes you rode in with became the angels who rescued you. Are you in regular touch with them these days?

David Handschuh: Yes. We are in regular touch. As usual for the past 19 years, we’re going to make sure to run into each other on September 11th this year.

The Phoblographer: How did the emotional trauma of that day impact how you approached your future photo assignments?

David Handschuh: I think it was a very pivotal moment for me. Gravitating from shooting breaking news photography; from photographing cops, firefighters, paramedics. Of course, I had a long recovery period after I was injured, but when I got back, I never wanted to photograph anybody dead or dying. So I transitioned into portraiture, into restaurant photography, chefs, food, cocktail and travel. I went from the newsbeat to the feature beat, but thankfully still have the opportunity to create images every single day,

The Phoblographer: While the memories won’t fade, what can survivors do to lessen the pain of that day?

David Handschuh: Well, I think one of the greatest methods of relieving stress, or to clear your mind of some of the horrible images, is to push them out by creating new images. Counselors, psychiatrists, psychologists say that creating a journal where you record your feelings and thoughts and emotions is an important way of coping. But also enhancing your creativity of whether you’re selling something, or capturing a photograph, or dancing, or playing music. So photographers, by nature of our work, have this amazing ability to shed some of the ugly thoughts just by creating new images.

The Phoblographer: Without photojournalists the true impact of 9/11 wouldn’t have resonated around the world. What is that inner mental resolve which helps them document such risky events by putting personal wellbeing and risk aside?

David Handschuh: It’s a dangerous job being a photographer today. People with recording devices who have the ability to capture moments and tell the truth are sometimes considered to be as dangerous as people with weapons. But I can tell people that communicating visually transcends all language and religion, and easily explains to people the truth of what happens out there, and to keep on telling the truth.

The Phoblographer: Where will you find yourself on the 20th anniversary of the event. Will you still be holding a camera to document the happenings?

David Handschuh: I am honoured to be one of six photographers who will be in a photographic pool at the World Trade Centre. The images taken by the six will be taken with every newspaper and every wire service and will be distributed around the world. So, I guess I’ve gone full circle in 20 years. I will be in the same place that I was 20 years ago, thinking about the good people who were lost that day, just because they went to work to feed their family or because they went to rescue people who were in need.

All images by David Handschuh. They are licensed and used with his permission. Please visit his website and Instagram page to see more of his photojournalistic work.