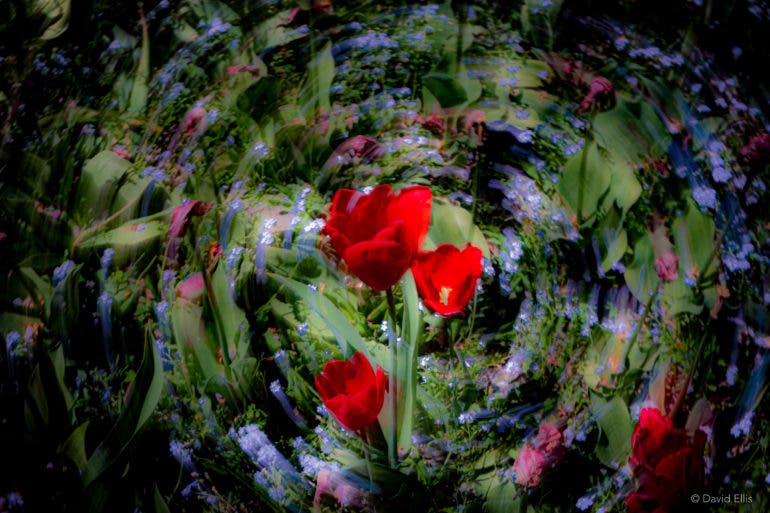 “I remember the assault of color from Filoli’s incredible tulip beds this spring,” the artist David Ellis tells me. “But I also remember the disconnect of people having to wear masks and socially distance to enjoy an outdoor park and garden.” As part of their spring display in March through May, the historic California house and garden showcased 30 varieties of tulips, from the crimson Kingsblood to the creamy White Triumphator. Still, amid all those swaths of living color, the specter of COVID-19 lingered.

A year earlier, California had been the first to announce a severe, pre-emptive, statewide lockdown associated with the pandemic. COVID added to an ongoing series of environmental crises caused by global warming, habitat loss, and the exploitation of the natural world. In February, just before the tulips opened, California passed New York to become the state with the largest COVID death toll. In May, as the tulips continued to bloom, severe winter droughts would result in an early start to fire season, a dark harbinger of increasingly unpredictable weather patterns caused by climate change.

“It seemed to me that day in Filoli that masking up protected nature from people as much as it protected people from each other,” Ellis says now. “It wasn’t enough to just capture the pristine flowers—there was more to be said.” His project, COVID Spring, is a series of flowers photographed using motion blur. It offers a dizzying portrait of the natural world in the modern age, at once a tribute to its sublime beauty and a reminder of the damage we’ve wrought.

The Essential Gear of David Ellis

“Technically, using these two crop sensor systems might seem redundant. But I find they render images differently. In some cases, I shot the same scene with both cameras and had very different outcomes. Olympus seems more ‘precise,’ while Fuji feels more ‘painterly.’ But each has its strengths, and each has its place in this series. These images were shot in RAW with the motion effects created handheld, entirely in-camera. Color and contrast adjustments were made in Lightroom.”

Phoblographer: You got your start as a photojournalist. How and when did you begin exploring photography as a fine art?

David Ellis: Actually, from the beginning. I worked for a publishing company that was more than generous with film and processing. They would issue “bricks” of Tri-X and Ektachrome 100 (packages of 20 rolls), and so long as you covered your story, you could fire off a couple of rolls of experimental images that they would process and critique—and even sometimes use as lead images for editorial.

I learned how to use off-camera flash, create second curtain blurs, double exposures, and motion and zoom blurs on film. These days, digital (and YouTube) shortens the learning curve and is a lot cheaper.

For me, the impetus to create art and push boundaries is second nature. My mother was an abstract painter, and my father was a screenwriter. There are generations of accomplished composers, authors, and actors in my family. I was fortunate to be raised in an eclectic creative environment where intention mattered and experimentation was encouraged.

Phoblographer: Please describe your relationship with the landscapes and flowers of California. What are some of your earliest memories of the natural world?

David Ellis: Basically, I’m an urban animal, having grown up in the crush of New York and LA. My first emotional connection to natural California was on a road trip I took up Highway 1 from LA to Big Sur with friends in high school. Between the cliffs, crashing waves, waterfalls, and Redwoods, I was hooked. Being surrounded by the powerful silence of giant trees can be a spiritual experience. You certainly feel the forces that are much bigger than you.

Phoblographer: What was going through your mind in the spring of this year, as California began to emerge from the pandemic? How did these feelings, hopes, or fears influence your approach to this project?

David Ellis: These images were made when COVID restrictions started to loosen up, and it was a release just being able to go places and photograph something beyond my home. My first sessions produced classic floral portraits. They were beautiful but missed the moment. This was not a normal Spring. Between COVID and climate change, human distortion of natural systems was tangible. So, reshooting the flowers as blurred images seemed to be the best way to express that impact while retaining the beauty of an amazing spring.

Phoblographer: Where did you find these flowers?

David Ellis: Northern California seemed to bloom all at once in mid/late March, so finding flowers wasn’t difficult. Some of these images were made in my front yard and in my neighborhood, others on several trips to Filoli, which is a country estate and garden in Woodside, California, located about 25 miles south of San Francisco.

Phoblographer: How did you create this dramatic motion blur effect?

David Ellis: Zoom lenses seem to be the best choice for motion blurs as they offer maximum creativity. Moving the camera while simultaneously “zooming” the lens can create some interesting effects. A variable ND filter is critical to being able to use slow shutter speeds (.5-1 sec), the smallest possible apertures (f/16-f/22), and low ISO (ISO 100-160) in bright sun. Without an ND filter, the images would have either been burned out, or the shutter speed would be too fast to achieve the effects.

Making sure the subject is identifiable and not completely lost in the movement is key to a good motion blur. That means having a solid idea of the final composition before you trip the shutter. Contrasty scenes with well-defined lights and darks seem to work better. Also, a little motion goes a long way. The greater the movement, the most pronounced the blur and the greater the chance that the subject will be lost. Ultimately, it comes down to trial and error. The best part of shooting motion blurs is that they are never the same twice–you’ll get surprising results.

Phoblographer: This isn’t the first project of yours to touch on the realities of life in the Anthropocene, and, in many ways, these images serve as a metaphor for how humans continue to harm the natural world. In California, what are some of the consequences of climate change you’ve witnessed in recent years?

David Ellis: The most dramatic evidence is California’s horrendous fire season, which has been extended from a couple of months in the fall to year-round. Last September, smoke from fires in Santa Cruz and surrounding areas choked the entire San Francisco Bay Area. With air pollution at more than 300PPM and the COVID lockdown, there was truly nowhere safe to go—it looked and felt like the end of the world. As of this writing, the massive Caldor fire is threatening Lake Tahoe, air pollution is toxic–greater than 500PPM–and we’re about a month away from the “official start” of fire season.

Phoblographer: ​​During the pandemic, more people turned to gardening as a way of coping with uncertainty and finding moments of beauty and hope. What have flowers come to mean for you in the last year?

David Ellis: From the Dutch Masters and Van Gogh to Irving Penn, flowers have captured the fascination of artists for centuries. Beyond the classic symbolism of renewal, grace, and fragility, I saw an opportunity to use flowers to express the exuberance of the season as well as the tensions of the times we find ourselves in.

That said, this is a fine art series, not a public service campaign. I’m not trying to hit people over the head with an environmental message. If people respond aesthetically to the color and rhythm of the flowers, that’s terrific. If they ask why the flowers are distorted and dig a little deeper, that’s good too. My hope is that people will bring their own sensibilities and interpretations to the work.

Phoblographer: ​​In what ways has the pandemic forced you outside of your comfort zone or encouraged you to experiment? Do you think you would have created this series if not for the unprecedented year proceeding it?

David Ellis: I’m not sure! Without COVID, I likely would have stayed in my comfort zone—street, travel, sports, and political events. I’m fortunate to live within an hour of some of the most dramatic natural settings in the world. While I don’t consider myself a “landscape” photographer, photographing the forests and beaches was the safe alternative to being locked down. The more time I spent in nature, the more I saw the damage of human encroachment—most of it caused by negligence and ignorance of the fragility of these complex systems. As a result, I’m much less interested in shooting street and have concentrated more on portraying the man/nature conflict.

Phoblographer: ​​In some ways, this series was fueled by anxiety–about the pandemic, reopening, the loss of wild places, etc. Do you still experience those feelings of worry and disorientation? If so, how do you cope?

David Ellis: It’s heartbreaking. Our natural world is rapidly morphing into something radically different. With snow in the Rockies in September and virtually no snow in February last year, even the timing of the changing of seasons can be a moving target. Frankly, I’m not optimistic about our ability to cope with climate change. If we can’t get enough people to take a miracle vaccine to vanquish a pandemic, I don’t know how it’s possible to get the alignment we need to make the massive behavioral changes and huge investments required to mitigate the damage that is sure to come.

We think of nature as a perpetual, invulnerable system. It’s hard to grasp that it can be altered by everyday activities like having hamburgers or taking a flight for a vacation. Apocalyptic images of glacial collapse and the “100-year” storms that seem to happen weekly these days are so overwhelming as to become almost invisible.

Thinking smaller might be a more effective way to make climate change more personal and immediate. Joe Sartore’s extraordinary Photo Ark, which documents endangered species, is one such project. His images are beautiful and haunting at the same time. While there is a documentarian aspect to some of my work, I’m taking a metaphoric approach by capturing common things and relating them to the bigger picture. Flowers, anthropomorphic natural images, urban blight—shining a light on the things we see every day and should not take for granted.