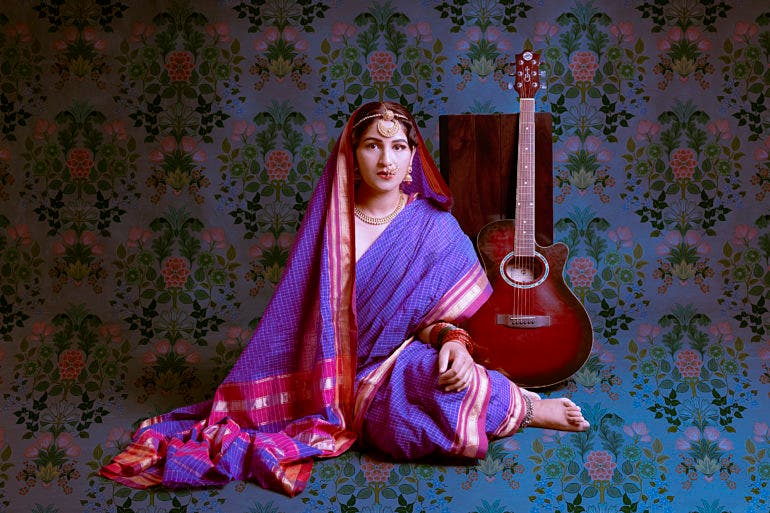 “It’s like I see something and an idea pops from nowhere,” says Indian photographer Daisy Naidu about the unexpected sources of ideas for her photography projects. Allowing these ideas to nurture and develop, she lets her imagination run free while executing them as concepts. She’s even done her own spins on portraits inspired by classical artists of yesteryear.

It’s definitely challenging and a tad intimidating to create personal interpretations of the works of established artists, somewhat akin to cover versions of songs of chartbusters in their own right. Not everyone can execute them in a way that’s both unique but paying homage to the original. Naidu has embarked on a couple of such photography projects and come up with some uncommon and eye-catching takes of her own.

I tend to focus more on the creatives and less on the gears and technology part of the process. I pay great attention to Lights and modifiers and many a times prepare my own custom gobos, scrims, and diffusers, as controlling and shaping lights is very integral to my process, especially for studio set ups.

The Phoblographer: Hi Daisy. Tell us about yourself and how you got into photography.

Daisy Naidu: I am a Mumbai-based artist and photographer. I’m fundamentally a fine art student from Bangalore. Although I studied fine art, I have always been an artist in a broader all-inclusive sense and took to theatre and dance (performing arts) at a very young age. In my art, I have used mediums such as indigenous fabrics, organic materials like grass and vegetable fibers and bright color paint, and sometimes sculpture as my mediums of expression.

Though I have always been explorative with my mediums, photography was never on my list. I then happened to gift a Canon 60D to my husband who was developing a penchant for wildlife photography. Eventually, since I accompanied him on wildlife photography tours, I learned the technicalities of using a DSLR and became accustomed to it, just so I had something creative to do on the tours.

Although I knew the nuances of the camera, it was not until 2019, when I began preparing a body of work on “Gender and Sexuality in Contemporary Mumbai”, that I actually got to use the camera for a photojournalistic style of photography that was essential to treat this subject matter. During the process, I realized that photography as a medium can encompass and combine most mediums I had worked with earlier to arrive at my own visual language. Then began my photographic explorations with portraits, color, fabrics, and light which led me directly to fashion and beauty-related work and that’s pretty much how my journey as a photographer began.

The Phoblographer: He’s considered one of the greatest Indian painters with absolute mastery of light and shadow. Tell us a bit about your Ravi Verma photography project.

Daisy Naidu: I’ve always been strongly influenced by Indian culture and every art form that I took to, has been culturally rooted in Indian traditions and aesthetics like in theatre I focused on vernacular folk theatre, and in dance I specialized in Kathak (Lucknow Gharana) and so in art, I have been inspired by Rajasthani miniatures, Nathdwara paintings and works of artists like Ravi Verma.

Ravi Verma‘s works are steeped in cultural aesthetics and mythology. They also have an innate theatrical quality of being staged for an audience. His characters are often posing for the viewer, they are caught in the midst of an act that usually seems to be loaded with a mythological narrative or a climax and his female characters clearly suggest the presence of a voyeur. These dramatic nuances, Depictions of Indian mythology, cultural elements, his use of light and shadow, and his color palette with rich Indian vibrant earthy colors, resonated with me and I found that the lockdown would give me some time and space to explore something artistic and experimental.

The Phoblographer: What gave you the idea to add a contemporary flair to it? How did you select the talent and the poses for it?

Daisy Naidu: I like to play with the idea of contradiction in my images. The very act of staging opposing elements in the same frame makes it relatable and grounded in reality as life itself is the existence of opposing elements, both yin and yang. I’ve observed this in film as well; some of the most iconic films/series stage the battle or the chemistry between opposing characters/personalities and that is what makes it either hilarious or scary or romantic or intriguing or interesting and hence memorable. The guitar in the scene is a contemporary element as I wanted to have fun with the process and try something different and just adding that element in the frame gives the narrative a unique perspective.

The Phoblographer: What were some of the ideas and concepts you juggled with for this series? Was there significant planning involved?

Daisy Naidu: I usually love motion and movement in my frames and like to see the still image as a frozen motion frame. Motion is also an emphatic method to express fabric as different fabrics have different flows, fall, and movement to them. For this series, I consciously chose to play with the opposite i.e., staged static poses very intentionally choreographed compositions, and poses with static fabrics like we used to have in family photography studios when I was a child. Poses, where the subject looks intentionally at the audience, are what I was aiming for since I wanted it to borrow from the essence of Varma’s art.

I was looking for a face that is seductive yet demure and I had worked with Harshita Sahu earlier on another project and I just knew that she would fit the bill perfectly. As far as the poses go, I usually work with the model and see how far I can stretch their capabilities, so

It’s basically teamwork and working with talented and motivated individuals like Harshita really makes a photographer’s work easy and gets the best results.

The Phoblographer: There are a lot of bright and bold colors in many of your images, yet this series has a more muted feel. Was this deliberate and what was the reasoning for it?

Daisy Naidu: The color palette is muted and very similar to a Varman painting, but the color grading is actually quite bold, considering the concept and subject. I’ve graded the light and shadow to look more surreal and out worldly cause it emphasizes the unusual juxtaposition of the past and the present. Also, my imagination and memory of the world is in emphatic colors and that flows into pretty much all art that I create.

I always have a bunch of image ideas that I want to create. It’s like I see something and an idea pops from nowhere and then It just lingers on and grows. I had always wanted to create this series but never had the time to indulge in artistic endeavors for a while, so when I got down to executing this, I knew just exactly how I wanted it because I had built it up in my mind. There was no speculation as every detail of the image was clear. The planning for the image was minimal as it was lockdown and there was only so much I could do at the time due to constraints in logistics and movement. I initially wanted certain cliché Indian elements in the frame but since they were out of reach at the time, I used the colonial floral Chintz wallpaper motif as it was relevant to the time and added to the past colonial narrative of India.

The chintz fabric (basically treated cotton fabrics) was extremely popular in Europe, especially in Britain at the time and before it appeared in fashion, chintz was big in interior design. The floral Indian chintzes in Europe were coveted as elite home furnishings, particularly to beautify small antechambers and bedrooms with colorful carpets, wallcoverings, and bedcovers and were usually seen as feminine, informal fabric. Needless to say, it adorned parts of elite homes in India as well at the time. I wanted a similar symbolic element that carried this colonial story in the frame and since I’ve used it on the wallpaper it kind of forms the stage for the subject quite aptly so.

The Phoblographer: While you were photographing this, did you feel like you wouldn’t be able to do justice to his style?

Daisy Naidu: I was focused on creating something inspired by Ravi Verman but not replicating his works so creating something that borrowed from the past while being anchored to the present was what I wanted to achieve. So, elements in the frame are not just from Varma but also from a specific time period in India, the 1900s. I also believe that art can have multiple iterations and connotations and that’s just the very innate nature of art that it is not bound to or bound by any specific version or variant which makes it so vulnerable and interesting at the same time.

I use the Sony A 6300 at times when I’m shooting untethered and it’s the camera that is lodged in my handbag all the time with a canon 50 mm, f 1.2 lens because I find many interesting sights and inspirations when on the move. I love this prime lens cause it’s really fast and sharp, but its also heavy…so I guess that’s a tradeoff.

The Phoblographer: ‘My Freida’ is also very floral and painterly in nature. What other historical figure concepts are you planning on doing?

Daisy Naidu: Frieda was a self-portrait that I undertook during the absolute lockdown as I had no one else to work with and found it to be the best opportunity to stretch my skills as a photographer. I have really loved Frieda’s physical appearance and personal style and since it is so iconic in contemporary times, I was just experimenting with the look and just having fun.

I also shot the Madhubala self-portrait at the same time. it’s a portrait of myself as Madhubala the iconic Indian actress replicating one of her very popular images that are found on the worldwide net. I sometimes feel that if I had the time, I would be a step away from producing Cindy Sherman’s kind of works as I really enjoy viewing her works.

Gru from the film minions would be an interesting next.

The Phoblographer: As a commercial photographer, do you find it hard to make time for completing personal projects? How do you ensure you have time to pursue them?

Daisy Naidu: Commercial work is demanding and restrictive creatively. Hence engaging in personal artistic projects is an absolute must to grow and expand professionally. Although these works were instigated due to the time and space I derived from the lockdown periods, I intend to keep experimenting with unique concepts and creatives in the future.

All images by Daisy Naidu. Used with permission. Check out her website and Instagram page to see more of her work.