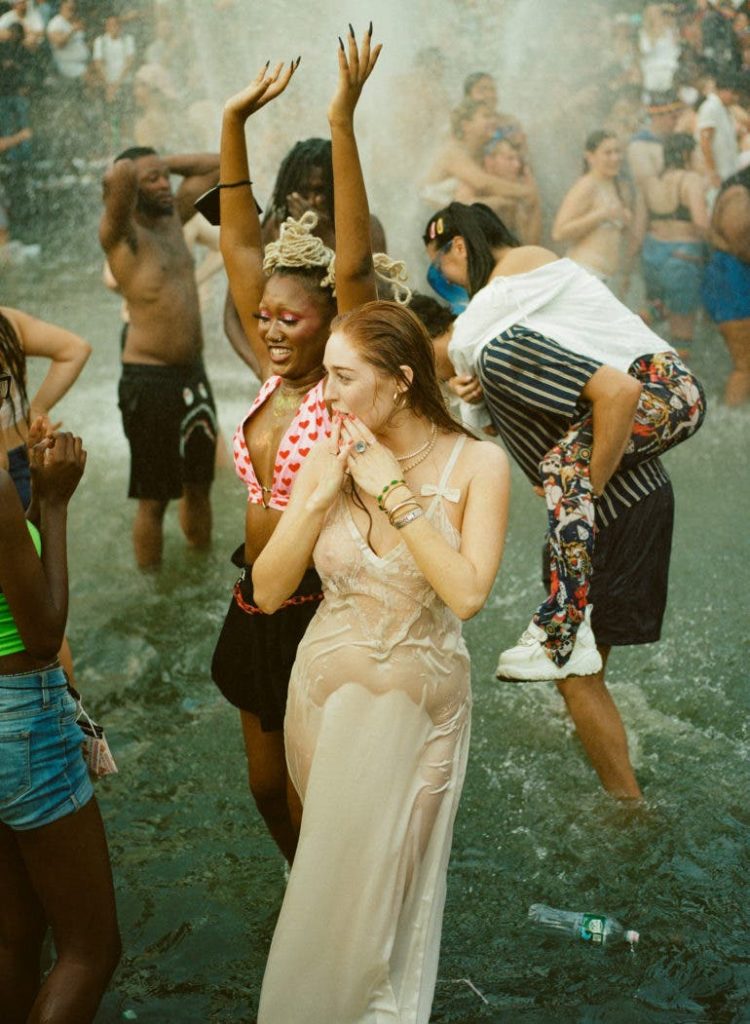 “I saw people free to hug and kiss again,” the film photographer Cyrus Arnieri tells me, looking back on the third annual Queer Liberation March earlier this summer. “I saw people walking with a purpose. I saw those that were remembering those we have lost in the past year. At the park, I saw people free. Naked bodies shined in the New York park, accompanied with just a smile. Strangers embraced and felt happiness together.”

Organized by the Reclaim Pride Coalition in response to more commercialized events, the Queer Liberation March does not permit police presence or corporate floats. It was 90 degrees in New York City on Sunday, June 27th, as thousands made their way from Bryant Park to Washington Square Park. People cheered from their rooftops; others played music from the sidewalks.

At the fountain at Washington Square Park, marchers danced into the night and dipped into the fountain. One couple got engaged as the water washed over the crowd. “The LGBTQ+ community always shows up for one another,” Arnieri says. “Being together, celebrating, and remembering those before us is extremely important to all of us.” We asked him to tell us more about that day.

The Essential Gear of Cyrus Arnieri

“I used my Mamiya 645 Pro TL with a 70mm lens and Portra 400. I really enjoy my medium format camera and have been using 120 film a lot more lately. I just like the clarity of the photos and enjoy the feel of this camera. Portra 400 is great for capturing individuals. It is great for skin tones, and I really wanted to focus on each person.”

Phoblographer: How did you first get started as a photographer, and what drew you to film as a medium?

Cyrus Arnieri: As a kid, I was always grabbing my mom’s camera and taking photos of whatever was in front of me. She transferred to a digital format soon after I was born, but I always found myself looking at physical copies of film photos and camcorder tapes. I knew I wanted my own film camera eventually, so I began searching thrift stores and saving up for a nice medium format camera. The rest is history.

Phoblographer: Can you tell us a bit about the history of the Queer Liberation March and what it means to you, especially this year, following COVID and related lockdowns?

Cyrus Arnieri: Pride parades have become loaded with corporations profiting off of queer bodies. The Queer Liberation March was created to combat capitalism during Pride month. Instead, queer people march and celebrate along with organizations designed to protect them. To me, the march means safety and community. Following COVID-19, this march was especially important. I was devastated to miss Pride last year, as it is one of the happiest days of the year for me. We lost so many queer lives this year, and it’s important to remember we always are there for one another.

Phoblographer: What were you marching for that day? What events–recent or historic, personal or political—inspired you to make your voice heard?

Cyrus Arnieri: I just had top surgery in December, which is a process that some transmasc individuals go through to remove breast tissue to create a more masculine appearing chest. This process is often not covered by insurance and ranges from $6,000-10,000, which is increasingly difficult for LGBTQ+ individuals to afford.

It also requires significant time off work, mental health referrals, fundraising, and support people to drive to and from surgery. This makes these surgeries extremely difficult to get, despite the necessity they are to many transgender and nonbinary people. I was there to celebrate, but also to demand change against these barriers and to support my community.

A more recent event was also on my mind. I graduated from the University of Illinois in May and was dead named at my graduation. This occurred to other students as well and outs transgender students and could potentially put them in harm’s way. I organized a protest in front of our Alma Mater and demanded change and emphasis on protecting transgender students’ identities.

I had multiple meetings with the office of diversity and inclusion and had a conversation with the Chancellor and was promised it would not happen again. They also are beginning to work externally with their system to find new ways to use students’ preferred names in their health care system, in registrars, and in classes.

Phoblographer: The Queer Liberation March bans police, but just a few hundred feet from where you took these photos, the NYPD showed up and witnesses reported some conflict. Meanwhile, close by, a happy couple got engaged to cheers and applause. Why was it important to you to show the peaceful, joyful moments that defined this day?

Cyrus Arnieri: I did not know of the NYPD conflict until I returned home that night. I saw many police officers in riot gear when I was departing the crowd a few blocks away, and I was worried. My photographs showed the contrast in Pride without interference from cops. People were free to express themselves and felt no fear. Meanwhile, while cops were moving a few blocks away, conflict arose. Pride began as a protest against policing, and I believe they have no place at Pride events, as they cause conflict and discomfort at an event that is meant for celebration and remembrance.

Phoblographer: What is your single most powerful memory from the March?

Cyrus Arnieri: I actually was able to witness the engagement in the fountain but was unable to capture any photos of it. Everyone was either crying or cheering. People who have never talked to the couple were bawling. Everyone was just happy to see others happy.

Phoblographer: Do you know any of the people in these pictures?

Cyrus Arnieri: I did not know anyone in the photos. I am actually from Chicago and was visiting NYC just for pride. I have not connected with anyone in the photos since, but I would love to find them and show them these photos at this unforgettable moment.

Phoblographer: What did it feel like to get these photos back from the lab?

Cyrus Arnieri: When I was there, I was shooting nonstop. I ran through three rolls of film in about twenty or thirty minutes. The girl in the white sheer dress was in front of me for most of the time. I don’t know why, but I could not stop photographing her. There was something about the nice white dress in the fountain that looked like it belonged in a painting. There were so many different people there all gathered around to celebrate the same thing. You could feel the happiness and community in my photos, which has put a smile on my face every time I look back at them.

Phoblographer: What do you hope to see when you look back at these images five years down the road? Ten years? 20 years?

Cyrus Arnieri:  I hope to remember that we can always bounce back from anything. This past year was hard for everyone. I was working 40 to 50 hours a week during the pandemic while being enrolled full-time in college in order to afford my top surgery. It was all worth it. We can always get through it and feel happiness together.

All photos by Cyrus Arnieri. Used with permission. For more from Cyrus Arnieri, follow along at myscarsonfilm and cyy.rus on Instagram.