The magical Milky Way looming over a nighttime sky offers a great opportunity for capturing beautiful images, yet many photographers shy away from this challenge. That’s often because they’re not in a spot with a compelling foreground, or they don’t know how to create the proper balance between what they see on the ground and in the sky.

In this quick tutorial from Jan Wegener of Phlog Photography you’ll learn how create a simple, realistic composite image with a little help from Photoshop. Wegener begins with two images; one of a nice landscape scene with a featureless sky, and another he shot of the Milky Way with a less-than-ideal foreground. 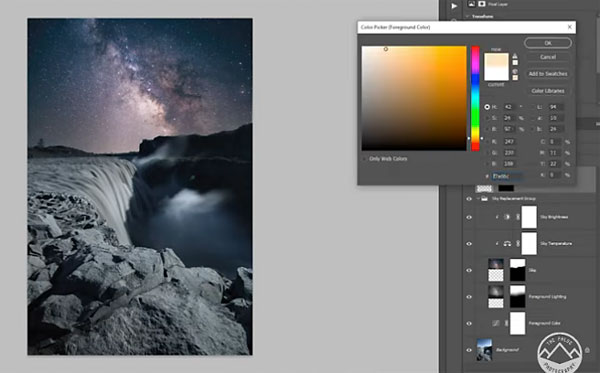 Using Photoshop’s easy-to-use Sky Replacement Tool, Wegener’s goal is to replace the sky from his landscape image with that from his Milky Way shot. He also adds a strong glow over the horizon for an even more compelling effect.

After changing Photoshop’s camera profile to Adobe Standard, Wegener makes several Raw enhancements to the scene. He first adjusts White Balance, adding stronger blue tones to emphasize nighttime colors in the scenery. Next he slightly bumps up the highlights and drops the shadows.

The final steps in his initial adjustments include adding texture and clarity to the foreground using a Graduated Filter, and employing a Radial Filter for more clarity in the waterfall at the center of the frame.

Now it’s time to turn to Photoshop’s Sky Replacement Tool to drop in the Milky Way from his second image. Wegener blends the two shots for a natural looking result, and uses the Brush Too to add some “sunset light” behind the horizon with a bit of orange/yellow glow.

All that’s left is a some final tweaking to enhance colors and warmth, and a bit of dodging in the foreground to balance out the tones. The result is quite impressive, don’t you think?

You can find more interesting tips from Wegener on his YouTube channel and in another tutorial we posted, explaining how to add falling snow to wintery images with just a few clicks in Photoshop.

What We Can Learn from 7 Digital Photography Myths