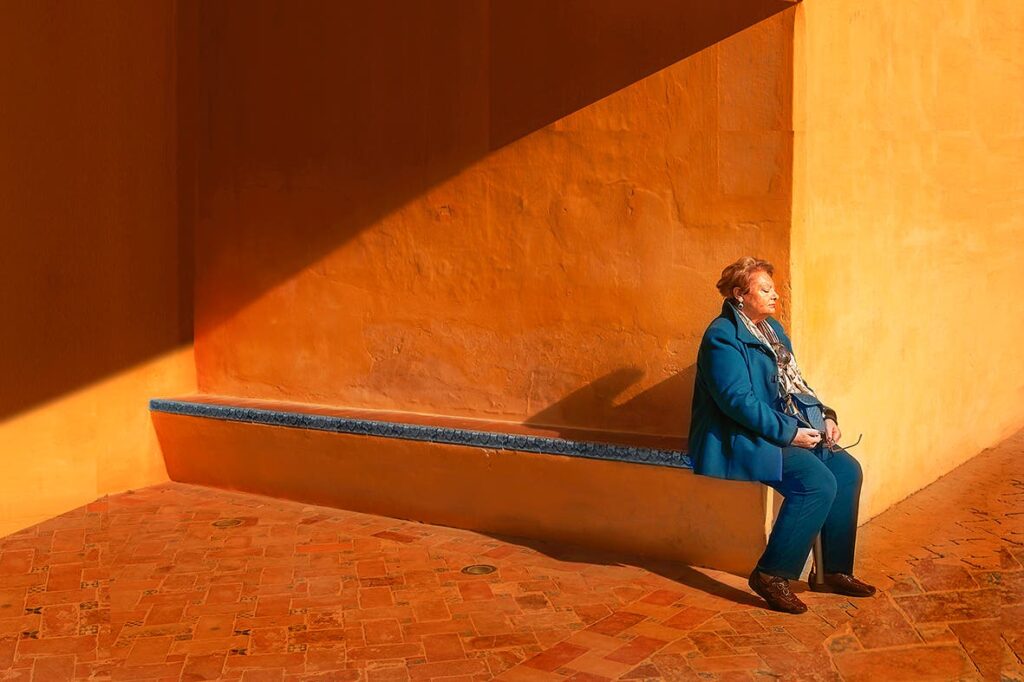 “There’s something about old people that makes me feel at peace,” says Concha de la Rosa about her favorite subject. “It’s their white hair, their calm gestures, their poses.” One shot at a time, Concha de la Rosa shares her world. Concha achieved success as a photographer in more professional adventures working as a still photographer for Spanish TV and movies. Despite this, Concha can’t stop walking around and photographing what she calls “sus abuelos”, her grandpas and grandmas.

Subscribers get some sweet perks and are automatically entered into contests!. Download our app for iOS, iPad, and Android and get no banner ads for $24.99/year.

Concha De la Rosa told us she uses the following.

The Phoblographer: How did you get into photography?

Concha de la Rosa: My father was a photographer, and he started teaching me the basics when I was little more than a toddler. I remember the first picture I took on my own as if it had been yesterday. My dad had just died, and at nine years old I didn’t know how to process my feelings. I just grabbed one of his cameras and went out on the street, loading the film all up by myself. I remember wandering a bit around my childhood home and finding a dirty stream nearby. There, among the trash and vegetation, I saw a flower. I took the picture and developed it on my own, and that was when I realized something that would be there with me forever.

No matter how I felt, no matter how things were in life, as long as I had a camera I could always find something beautiful around me. As it is, I have a pretty good life, but not being able to take pictures makes me sad.

The Phoblographer: Most of your pictures feature old people, may I ask why?

Concha de la Rosa: Back when I started looking for these kind of aesthetics, this kind of photography, I would take pictures of people of all ages, even though I favored old people. Ten years ago, though, I took this picture at the Louvre, featuring a young woman. There was something about the photo that irked at me, and I didn’t exactly know what. A couple days later I saw the same scene, but this time with an old man. I noticed his poses, the way he moved slowly and carefully. I realized that these things, along with the way older people tend to clothe themselves, their white hair, brought me some kind of inner peace.

The Phoblographer: How do you approach your subjects?

Concha de la Rosa: As you know, I’ve been taking pictures since I was nine, so that would be forty years with a camera hanging around my neck. Thanks to that, I’ve developed a technical sense that allows me to shoot in manual on the fly.

I always carry my camera with me, so when I notice something that calls my attention, I see the picture in my mind. I walk towards it, and I measure the light on one side so they don’t notice me approaching. While I do this, I change the camera settings to my taste; I always underexpose my pictures, and I always force the color temperature so I get a warm tone no matter the light.

Once I get where I want to be, I frame quickly, snap one single shot and point the camera away from the scene. As I work with a 40mm lens, at that point I’m about six feet from my subjects — but as I’m holding a big camera so close to them, they don’t even think I’ve been so brash as to take their picture!

The Phoblographer: Do you show them your work? Has anyone recognized their loved ones on your social media?

Concha de la Rosa: As it’s an open space and I’m careful not to harm their public image with my pictures, I don’t have to. In some cases, though —the oldest people, or moments where I think I may have captured a really intimate moment— I talk to them. If they don’t have an email, I will ask them where they go usually for coffee, just so I can bring them a print or a pen drive with the picture on it for their relatives.

I must say I’m lucky enough, because I never have had a problem with this. In fact, there’s an anecdote about my favorite picture that makes me feel especially proud.

The Phoblographer: Please tell us about that.

Concha de la Rosa: A Facebook friend asked me if I could take pictures of his father, who was an Alzheimer patient. He lived in an nursing home, and he was fading away rapidly. I went there and I noticed a woman sitting on her own, with such an impeccable taste in clothing that I couldn’t help but wonder. Did she dress herself? Did someone else dress her? I just had to take her picture.

As it was a private nursing home instead of an open space, I talked to the manager, and she pointed me to her daughters. They told me that the only thing their mother remembered was how to dress, and that made me feel incredibly warm, you know? I noticed, as you might say, the only thing that was truly left of her. Of course, they have the picture hanging at home.

The Phoblographer: What kind of treatment do you apply to your photos?

Concha de la Rosa: I don’t do much more than I used to do back in the analog days, back when I developed by hand. As I’ve been shooting underexposed deliberately for most of my life as a way to isolate the background and downplay the reflections, the only thing I do sometimes is adjust the light on my subjects. In fact, my Photoshop skills are atrocious!

The Phoblographer: So, manual is better?

Concha de la Rosa: Oh, no. It’s just the way I shoot. When I have had pupils, I’ve taught them how to shoot in manual, but always telling them they have other options, because they don’t have to be as nerdy as me. All ways of taking pictures are valid as long as you put your soul into what you’re doing.

The Phoblographer: Thank goodness. To finish this interview, we heard you took part on an exhibition in New York recently. How was the experience?

Concha de la Rosa: Oh yes. It was Women Street Photographers, held in El Barrio Artspace 109. When I got there and saw the work of all those women, so different to mine, I felt really small, you know? But I noticed how people were queuing to see my work and I was elated. I made a lot of friends among those artists, and some commissars were so interested in my work I could exhibit soon in Paris and Berlin!

All images by Concha de la Rosa. Used with permission. Be sure to check out her website and her Instagram. Want to know how your work can get featured? Take a look at this link and apply.