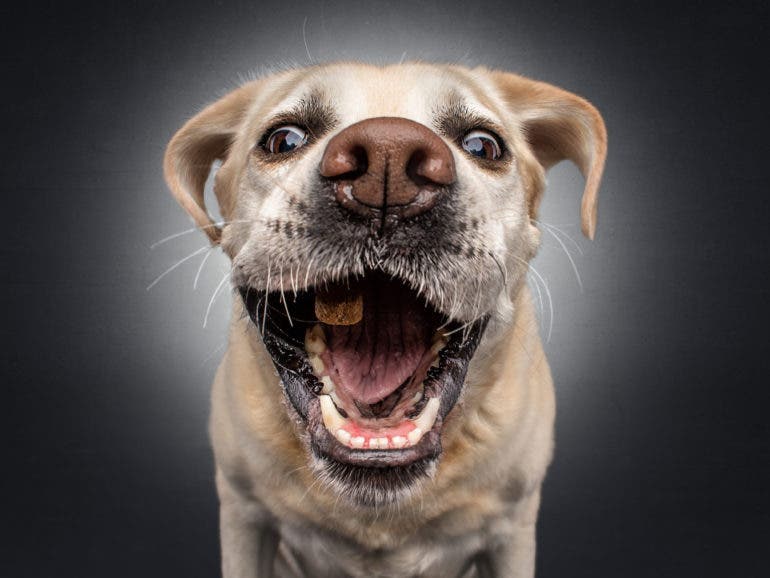 “I made the first ‘Treat Shots’ with my dog Lotte,” the photographer Christian Vieler remembers. He’d just ordered his first portable flash, and since she was always available, Lotte served as the perfect test model. During their shoots, he got into the habit of tossing her a treat, and he soon started doing the same with all his canine clients at the end of their sessions. It was fun for the dogs to get a reward, and whether the dog caught the treat or not, the photos always proved delightful.

In the last eight-plus years, Vieler has met dogs of all shapes, sizes, and ages. They’ve graced the pages of two books thus far: Treat! and Treat Too! Lotte, the pup who started it all, will turn sixteen years old in November. Vieler has created thousands of photos with her, and she’s been in the studio to greet many of his new clients and show them the ropes. “Lotte has always been a quiet, rather introverted, but extremely people-oriented and mega-lovable dog,” the photographer says.

“At some point, she decided that I am ‘the rock’ around here, and since then, she has not left my side.” It’s been almost a decade since he started experimenting with high-speed flash photography, and while his earliest photos of Lotte might not be quite as polished as the professional shots he makes today, he’s kept and cherished them all. His portraits of senior dogs, too, have taken on new significance as he’s watched Lotte enter her golden years.

We asked the artist to tell us more about his ongoing series of treat photos, called Snapshots.

The essential gear of Christian Vieler

“I’ve been working with Canon since the dawn of time and currently always have two 5D4s in my pocket. For the funny treat pictures, I use a Canon 16-35mm lens at 24mm. For portraits, I bring this lens, but also like to use the 50mm as well. I also like to try new cameras on the fly. Right now, I also take pictures with the Panasonic S1R at every shoot. My lights are from Profoto. My main flash for the treat shots is the D2 1000, which I use with a 150cm umbrella. For portraits, I might mix it up with several sources.”

Phoblographer: Please tell us about how you first got into photography. Did you always know you wanted to work with dogs?

Christian Vieler: “I first started photographing Lotte in 2008-2009. During that time, I took my first SLR out regularly on our walks in nature. Since we rarely went alone, I often photographed several dogs. Later, as my interest in photography grew, I stuck with dogs. My initial skills weren’t what they are now, so I didn’t want to bother human models. The dogs were tireless in modeling for me, and they were happy to do it for a few treats. A short time later, my passion for dog photography was firmly established.

Phoblographer: What are some of the biggest technical challenges that come with capturing these micro-expressions?

Christian Vieler: The biggest challenge was one that would not even occur to the trained photographer, and that’s freezing motion when working with flash. Every trained photographer knows that with the right flash, you can freeze movement even at shutter speeds of 1/160 sec. Newcomers, like I was at the time, often don’t know this. Even today, I am regularly asked how I get the pictures so sharp. My first attempts were with functions like HSS at shutter speeds of 1/1600 or 1/2000 sec, but I find the results at speeds like 1/160 sec are simply better.

“Another aspect is that I’m shooting at 24mm, so I have to get very close to the dog to shoot full-frame. At f8 or f9, however, I already have a shallow depth of field here because of their long noses, which would not occur with people. When working with dogs, I like to work with an aperture of f13 to prevent this effect. The result is that I need much more flash power because I also like to work with soft light.

Phoblographer: You’ve been working on this project since 2013. What is it about dogs and treats that continues to inspire you?

Christian Vieler: The basic idea will never stop being exciting, fun, and inspiring for me. These ‘Dogs Catching Treats’ pictures let us see emotional facets within dogs that we otherwise wouldn’t be able to see with such clarity: panic, joy, desire, supreme pleasure. That simply never gets boring. The results are as individual as the characters of the dogs who walk through my studio door.

Phoblographer: Do you have any funny anecdotes from your time working with dogs?

Christian Vieler: I still remember one time when I tried to work with a Chihuahua puppy. I was sitting in front of the dog as usual, but he was so fidgety and all over the place that my nerves, despite my training and patience, were starting to wear thin. The dog was scampering around, and in the blink of an eye, he changed direction, rushed up to me, and crawled over my knees, down my pants, over my sweater, and up to my neck, only to lick my ears with his tiny tongue as if it were the greatest thing in the world. The shoot took place in a large store. I stayed on the floor in the throes of a laughing fit–also because it tickled terribly–in front of many spectators for what must have been a whole minute.

Phoblographer: What has this long-term project taught you about dogs?

Christian Vieler: I have to turn that around a bit and say that the dogs have helped me learn a lot about myself. They have also made me more patient. Often, you get better results when you manage to fully engage with your subject. But I think I have also become a good observer, which helps me to deal with situations much better today. In the past, I might have been annoyed or thought, ‘Oh, this dog is a bit spoiled, over the top, cheeky, etc.’ But that’s never the case now. The first thing that pops into my head today is that there is a very innocent creature sitting or standing opposite me. No matter what our moods might be in the moment, I think about how we can work together.

Phoblographer: What tips do you have for people hoping to capture expressive photos of their pets?

Christian Vieler: I think three of the most important tips are as follows. Don’t wait for moments; create them. Watch your animal, and see exactly what happens and when. Try to recreate photogenic situations and then have the camera ready. That’s another one: Always have the camera ready. The most important thing is to avoid motion blur. If I’m hoping to capture a golden moment in my everyday life, my camera is ready with an appropriately fast shutter speed (1/1600s is good, for example). Aperture and ISO come second. And perhaps most importantly, be sensitive, and connect with your dog emotionally.

Phoblographer: What’s your favorite memory from your time working with these dogs?

Christian Vieler: I will never forget the birth of Snapshots because these photos totally changed my life. I still remember sitting in the living room with Lotte to test the settings of the flash while I threw treat after treat to her. She was sitting still, so that was the only way I could get her to move so that I could test HSS. That was 2013, and by the end of 2015, there was a television crew on my doorstep. Newspapers around the world were publishing the pictures, and the first book contract arrived at my house soon after. My life turned upside down, and Lotte was there for all of it.

All photos by Christian Vieler. Used with permission. For more from Vieler, visit his website, and follow along on Instagram at @vieler.photography and on Facebook at @VielerPhotography. His books Treat! and Treat Too! are both available worldwide.